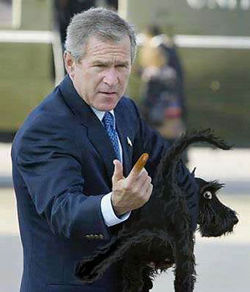 DALLAS, Texas -- Just days after he passed away from cancer at the age of 12, black Scottish terrier Barney has been blamed by his owner President George W. Bush for inciting him towards invading Iraq.

"Barney was by my side during our eight years in the White House," Bush said in a press release (see bottom of page), "Out of respect to our friendship I never said anything while he was alive, but the war on terrier terror was basically all his fault."

In the most astonishing detail of the statement, Bush claimed that Barney gained the power of speech the day he dropped him on his head when disembarking from an airplane. "At first it was just a few words, very slurry, mostly abusive 'cos I'd just dropped him. But day by day, he became more and more talkative. It got so that he would lecture me in the Oval Office. One time, I was replying to him when an aide unexpectedly came in the room. I had to make something up, so I told him I was talking to God." 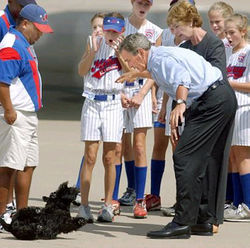 Talking point: The day Barney began to speak. His first words were, "Ow, you fucking klutz."

BarneyCam, the viral video that led to Barney becoming a household name, was actually the brainchild of the dog himself, not, as had been stated, the President. Bush reflects, "He acted dumb on camera, not saying anything, and I was there asking him what the plot was supposed to be. Off-camera, it was the other way around, he ran the shoot with an iron paw, telling me what to say, criticizing my performance, telling me I had to up my game."

The political world was of course, less simple to breach. "In meetings he obviously couldn't say anything, but he was always present, and we had a special code. If there was something he especially liked, he would lick his balls, if someone said something that riled him, he'd drag his ass on the carpet. Gee, I used to hate him doing that."

However, Barney's influence made itself known when Bush made an uncharacteristic gaffe. The President said, in an interview with Bob Woodward about the Iraq War for the book State of Denial: Bush at War, Part III, "I will not withdraw even if Laura and Barney are the only ones supporting me." [1]

Bush's take on Barney is not all negative. At the end of the press release he reflected on the positive side of their friendship, saying, "He is someone I will miss dearly, someone who stood by me through eight years of presidency. He taught me a lot about Middle Eastern politics and I taught him how to heel and roll over. I just wish, when it came to making those tough decisions about Afghanistan or Iraq, I hadn't paid so much attention to a small black dog." 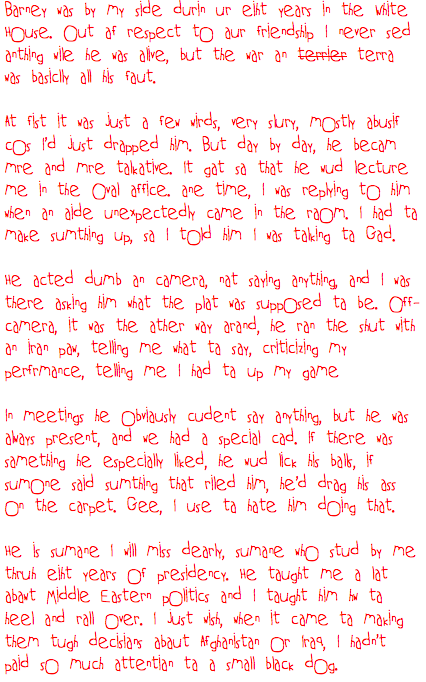 Featured Article  (read another featured article)
Featured version: 11 February 2013
This article has been featured on the front page. — You can nominate your favourite articles at Uncyclopedia:VFH.