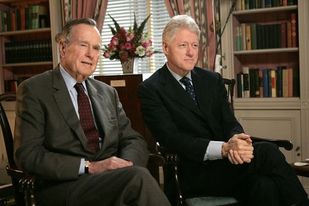 HOT SPRINGS, Arkansas -- Two American ex-Presidents have again joined forces for Louisiana relief--in this case, relieving the nation of Louisiana by convincing some other country to take it.

Presidents George H.W. Bush and Bill Clinton conducted a joint press conference to encourage public support for their cause, as they did after the tsunami in Indonesia. These meetings of the too-nice ex-President with the too-naughty one are designed to convince Americans that some causes supersede ideology, and can only be solved in a flurry of bipartisan backslapping.

In this case, the two dignitaries have decided that Louisiana is simply more trouble than it's worth.

Mr. Bush said, "I'll tell you, my boy took heat on account of Louisiana after Hurricane Katrina. After all, FEMA did just what it was supposed to do: Not let any doctors into the disaster area before they did their paperwork, block all emergency supplies until Washington could certify them, and conduct an orderly, slow exodus to Houston."

"I thought all those trailers were neat," Mr. Clinton continued, a gleam in his eye. "Meanwhile, my guy is taking heat for the oil spill. But the riggers aren't good for campaign money, and the people on the shore aren't either. There really is no economic activity in the state.

"Well--none outside the French Quarter," Mr. Clinton concluded with a giggle. "Welfare checks is about all," Mr. Bush agreed.

The two ex-Presidents are using their contacts in foreign countries to try to find a country willing to adopt Louisiana, without too much cash as a sweetener. Their most promising hope is that the angry Mexican illegals rioting in Arizona might be induced to relocate to Louisiana, and that Mexico might adopt the U.S. state. Both men were visibly dismayed on being informed that Louisiana never belonged to Mexico in the first place, but did briefly to France.