Human Rights Czar Von Doom is a supporter of Bush's drive to ignore the Geneva conventions, having used similar tactics against insurgents in Latveria.

It was not immediately known if the Czar Czar would oversee the God czar, which would thus put him in control of all of the universe, a possible conflict of interests with the universe czar. President Bush has been adamant in his support of the Universe Czar, pointing out that despite problems with the Particle Czar, he's "usually kind to smaller Czars." 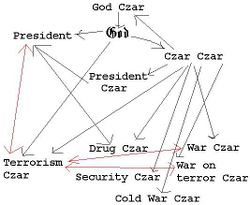 Human Rights Czar Dr. Viktor Von Doom, PhD stated that he would not be under the direction of the Czar Czar, saying, "Doom will not be subjugated! Doom will torture this puny Czar Czar until he turns over his post to Doom!"

Asked why he continues to create meaningless new bureaucratic positions that already exist under a different name, President Bush was candid in his explanation:

"I want to reduce beaurocracy"