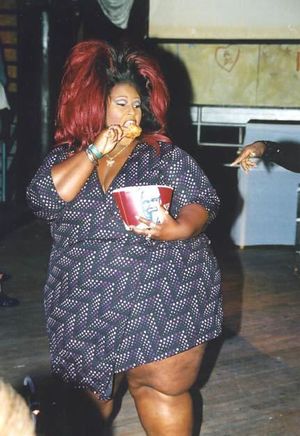 MY GOD THERE'S ONE RIGHT NOW!!!

FLINT, Michigan – UnNews is reporting that several bitches in the city of Flint just will not shut the fuck up. Witnesses describe the bitches as large, loud black women. They have been spotted at hair parlors on the east side of town, at downtown convenience stores late at night, and at several local dance clubs. It is reported that their location makes little difference to them as these bitches will not shut the fuck up and let anyone else get a word in no matter where they go.

What the bitches don’t shut the fuck up about is unknown. It is believed that they are talking about baby momma drama, welfare checks, and macroeconomics, but no one can be sure. They often wave their hands and point while speaking an incomprehensible language. Our best speculation is that they are either uneducated ghetto rats or foreigners.

The police of Flint have advised anyone who spots these bitches to not tell them to shut the fuck up, because it will only make them talk louder. They say residents are better off just avoiding eye contact and, if necessary, running away leaving loved ones behind. You really don’t want these bitches to notice you. You may not understand what they are saying, but you can be sure that they are talking about you, and not in a nice way.

Crack cocaine may also be an explanation for the incessant rambling and incomprehensibility of these bitches. It is reported that these dirty bitches live on a side of town known for its abundance of crack cocaine. According to WebMD, one effect crack cocaine has on people, especially bitches, is that is makes them unable to shut their fuck up.

This article features first-hand journalism by an UnNews correspondent.
Retrieved from "http://en.uncyclopedia.co/w/index.php?title=UnNews:Bitches_just_won%27t_shut_up&oldid=5549290"
Categories: