STIRLING, Scotland -- A bloody coup at M.A.R.S. (Military Armaments Research Syndicate) has come to a close, with Baroness taking over as CEO at the ailing arms company.

The multinational corporation has been on shaky fiscal ground since 9/11, when the business paradigm of supply-side terrorist economics was turned on its head. After the defeat of Saddam Hussein by "Coalition of the Willing" forces and the ensuing occupation of Iraq, margins fell to record lows, cutting profits in turn. M.A.R.S. has been unable to distribute dividends to shareholders for three out of the past five years.

"Post-9/11, our company's former CEO expected a boom in the sales of hi-tech weaponry to the many terrorist groups that were gearing up for Jihad on the West." said Baroness of M.A.R.S.' previous head, Destro, "Unfortunately that new reign of terror failed to produce the predicted boost in sales to the Axis of Evil or, indeed, any other evil organisation. Instead, only a few countries in the West increased their budgets, and that money was spent primarily on anti-terror tools, like security cameras and bullet resistant vests, to counter our own products."

According to Jane's Defence Weekly most military arms purchased by first-world countries were either produced internally or were bought from arms companies based in other allied first-world nations. Less than four percent of military budgets went to terror-related companies like M.A.R.S., leading to slow sales on products such as the recently modernized H.I.S.S. (High Speed Sentry) tank and the block 7 "Rattler" VTOL ground attack aircraft.

"Unfortunately Destro's vision of the future has proven to be wrong, and disastrously so; most rogue nations lack the funds necessary to buy armoured vehicles and jet aircraft. The Kim Jong-il regime, for example, spends one eighth of North Korea's GDP on arms, but that works out to be a mere five billion dollars U.S. annually. Most of that goes to their nuclear program and the remainder is spent on boot polish and giant hats for their border guards. I wanted to expand M.A.R.S. operations into uniforms, but was shot down by Destro and his cadre after I presented the cost-benefit analysis at a board meeting."

After leaving that meeting the Baroness' C.L.A.W. (Covert Light Arial Weapon) was brought down by SAMs fired by Destro's elite Iron Grenadiers. After the crash she spent ten days in a coma and several months recuperating and plotting her revenge. 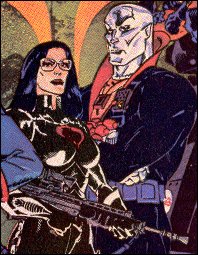 "Big business just can't compete with the Mom & Pop terror-supply organizations that are popping up all over the place nowadays." Baroness continued, "For example, our Assault System Pod, or A.S.P., effective against both aircraft and light armour, has a unit price of well over a million dollars, while our competition stumbles across an unused artillery shell, straps a cell phone to it and markets it as an I.E.D. for a couple hundred bucks. High-tech terror has fallen by the wayside; with prices like that, who needs to launch a surprise raid on Fort Knox to pay for nuclear weapons anymore?"

Baroness closed the press conference by announcing a halt on the production of all unprofitable lines, with price cuts on remaining stock, "Our closeout sale prices are so low you'd think Cobra Commander was in charge."

Their new line of terror products is expected to be unveiled during "Spring Jihad Week" in Tehran, starting in February. A preview of the line will be shown this Friday on "Terror Television" with host Jeanne Beker.