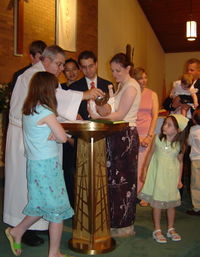 MINNEAPOLIS, Minnesota -- James Andrew Rolfson, a 3-month-old infant and the newest member of the Roman Catholic Church, reacted poorly to his baptism Sunday.

Despite the removal of his original sin, Rolfson cried and screamed through the 10-minute ceremony, conducted before 100 parishioners at the 9 a.m. service at St. Bridget's Catholic Church.

"Salvation is peace," said Fr. Charles Lynam as an anguished Rolfson kicked his mother Jeanne, 32, square in her lactating, rock-hard left breast. "And baptism is the beginning of salvation."

As Rolfson's 33-year-old father Patrick took the baby and made an unsuccessful attempt to rock the child to sleep, Lynam charged Rolfson's godparents Bill and Linda Rolfson to raise him to be a good and obedient member of the Church.

The Rolfsons' vow failed to calm the child, who gripped onto his father's lapels in fear of being dropped into the marble baptismal font. The baby momentarily calmed down when Patrick Rolfson shifted his hand down his back, but returned to screaming as Lynam poured the waters of baptism over him.

"It really was puzzling," Linda Rolfson said after the ceremony. "These young people really don't appreciate what it means to be transformed from a mere creature into one of God's elect."

James Rolfson attempted to squirm out of his father's arms as Lynam led the congregation in the litany and asked them to renew their own baptismal vows. Rolfson and nine-month-old Catherine Mary Smith -- victim of a baptism six months ago -- were the only congregants present who did not renounce Satan and all his works, although a Rolfson family member said later that Bill and Linda were "speaking in Rolfson's place."

The ceremony concluded with Lynam applying chrism to Rolfson's head, which led to an ear-splitting scream from the infant, delivered by c-section in April.

Despite the horror of the morning, Jeanne Rolfson said Sunday evening her son "was doing better."

"I think he's starting to understand that he received the grace of God, and that what happened this morning was not a punishment, but a gift," Rolfson said. "Also, he had a poopy diaper."