Al-Qaeda wasn’t the only one trying to take down the World Trade Center. The Homeland Security Council said yesterday that at around the same time Al-Qaeda carried out their terrorist attacks in the United States, another group known as the Ya-Ya Sisterhood were planning attacks that could have occurred around the same time on U.S. soil.

In the year 2000, the Ya-Ya’s, similar to the notorious Axis Powers came out of the closet to form a sisterhood of “stay-at-home women” bent on destruction of several top buildings in the U.S. The Ya-Ya’s planned to take down 5 select buildings with planes.

The conspiracy involved several of the top women of the United States whose last names all end in “Smith”. The highest positioned women in the sisterhood, (in this order), included women of liberal backgrounds and democratic ways: 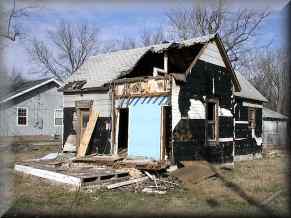 The Safehouse of A. Smith in Chicago

“A” headed the eventual coup from her safe house in Chicago. Years of planning were to undertake because the eventual millions of the Ya-Ya’s who were to enter into the group only knew how to knit, and 98 percent of the Ya-Ya members didn’t know who A was, the main reason supposed by the sisterhood was that there are so many A. Smiths out in the United States.

Starting after the 1993 World Trade Center car bombings, A, rising in popularity after years of her radio success in the U.S, collected a group of 3 members: Herself, B and C. Once the name was established after the popular book/movie Divine Secrets of the Ya-Ya Sisterhood, the sisterhood began to mark down possible sites to unleash the most destructive impacted on the United States.

The Seattle Space needle and the St. Louis Archway were added later to the list after and D.A and E became top members of the sisterhood.

Women members were needed to help hijack planes, so from 1993-1999, “A” placed subliminal messages in all of her shows to help gather women listeners who wanted to learn flying lessons. Eventually in 1999, all the members of the sisterhood new how to fly a plane. The Ya-Ya’s were ready to initiate their attack on U.S soil, code name: Operation Knitting.

Operation Knitting was cleverly coined by the Ya-Ya’s after when one of their factory-working members, "T.L", noted that: “We are about to “crochet” the U.S back to times that are more internally “woven” than never before through terrorist actions, on our homeland, like the Civil War.”

“The Stitch” as Operation Knitting eventually began to be known as started in New York with the simultaneous plane crashes into the World Trade Center and Smithsonian. At “Tea Time” or four o’clock EST, members of the Ya-Ya would highjack two planes needed for New York crashes. At three o’clock, CST, a two plane in the vicinity of the Dallas/Ft. Worth Metropolitan would be highjacked towards the Comerica Bank Tower, one would just miss as the next would head towards the St. Louis Archway. On the west coast one plane leaving from San Francisco at 11:30 headed for Seattle. The only time America would know what was going on would be when someone looked up into the sky, or if they watch the news, or if they woke up before six.

Two years later, on September 10, 2001, an attack date was final decided among all the members of the sisterhood, September 11, 2002. The next day the Ya-Ya’s disbanded from risks that these attacks would somehow be connected to them. What did the Ya-Ya Sisterhood learn from this betrayal of the United States? Never plan something that someone who prays as load as they cry can do better, or even accomplish.

According to Homeland Security the Ya-Ya’s didn’t have a driving force to turn over the United States. The main reason was that the highest earning members were earning too much money to ruin themselves. Other reasons attribute to the overall lack of unity within the women, resulting in sects. Members did not attend monthly meetings, the slowness of the members showed that the interests were not in destroying buildings of importance, but instead in meeting top Smiths of the country that they “totally love.” Al-Qaeda beat the women by one year, and they planned 10 years longer than the Ya-Ya’s did. Another fundamental problem with the Ya-Ya’s was the fact that the flags 50 stars and 13 strips were overpowering for them. The Women in general were too gentle and caring, Operation Knitting? Really?

Homeland Security can’t arrest any of the members because the evidence lacks and they never did anything wrong. Someday the U.S will get its justice. As long as any A. Smith has power, well it is in the opinion of this author that the U.S will never be safe.