The novel The Lost Introduction to Walden is also available in paperback. 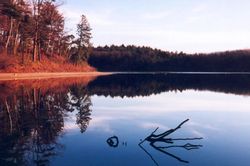 Henry David Thoreau wrote a book about this pond, which was called Walden pond; he called the book Walden.

I, in my extremely thorough Thoreau research, have found what I believe to be the long-lost introduction to Henry David Thoreau’s Walden. What follows is a transcript of what it said. It has not been altered, fabricated, or completely made up in any way.

The Lost Introduction to Walden

When I wrote the following pages, or rather the bulk of them, I lived alone, in the woods, a mile from any neighbor, in a house which I had built myself, on the shore of Walden Pond in Concord, Massachusetts, and earned my living by the labor of my hands only. I wrote what I experienced there in a number of journals, and here present them to my peers and to time in the form of a narrative, which I have simply called Walden after the pond that was my home for those two years. The narrative—which I have called Walden—is based upon the journals I took at the pond—a pond called Walden—and is more concise and condensed than the rough, unrefined thoughts that bore it. I spent a great deal of time—seven years time—refining and condensing the thoughts of my journals. What resulted, however, was not the narrative that sits ahead of these first few pages. The resulting work was too long and erroneous, so said my good friend and secret bedfellow Ralph Waldo Emerson. Under his suggestion, I struck out much of the book. After removing all of the detailed, descriptive, and sultry accounts of all the dumps I took—which indeed constituted much of the book—I was left with but a pamphlet’s worth of pages. How could this be? thought I to myself. Did I not go into those woods removed from the rest of humanity for a purpose? And did I not record that purpose in good faith and earnesty? I was then struck with an idea, a marvelous idea, to flesh out the meager thing that was to be this book. I would reiterate—repeat, restate—every point I had made into my pamphlet until my pamphlet became a book—a book called Walden. 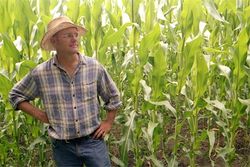 It is from the mind of the common man that true philosophical beauty springs forth like a gusher into the world.

I decided to reiterate the points and merits of my stay beside Walden Pond because my cause is to me—and should likewise be in the soul of every other—a dear one. Every man—unless they are a classical philosopher, artist, inventor, or advocate of slavery—has worth, has a voice, has a mind. It is from the minds of these untrained, uneducated, unwitting thrall of common men that true philosophy and beauty lies. It is this reason that I decided to take up residence beside that pond where I spent two years of my life. Is it not in the arms of nature where man feels most at home? Do not these new inventions that make our lives much more convenient and more comfortable really make them worse somehow? So it was with these thoughts that I built my cabin—for a mere $25 dollars, which I talk about in great length in the first chapter of this narrative—beside Walden Pond. It was for these convictions of mine that I decided to reiterate them—again and again and again and again—in this book of mine.

I decided upon restating the beliefs of mine multiple times in this narrative about my stay at Walden Pond because it is not just for myself I speak, but to the farmers and laborers of this great nation, unless they own slaves. It is in their minds that reside the thoughts they must follow. Why should they have to listen to people wiser and smarter then they are, unless that person is me, and is telling them not to listen to those other, more credible and interesting and engaging persons? It is with these thoughts that I entered the thick of the woods, and built a cabin for $25 dollars, and took up residence at the side of Walden Pond. The experience was both exhilarating and sublime; and it is with these feelings on my mind that I wrote and reiterated them time and time again in the narrative that I have called Walden. 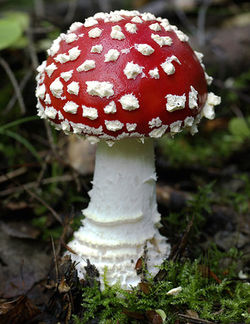 Beautiful mushrooms like this one inspired Thoreau and filled his soul with a transcendent spiritual ecstasy.

The reason behind my decision to reiterate my philosophy in my narrative Walden, and indeed everything I have written up to this point and ever indeed intend to write, is because farmers, in their toil, are really smarter than anyone, and should therefore listen to me. Unless that farmer happens to own slaves, in which case I hate him. The philosophy and art upon which our civilization is founded is not a thing that can be applied to the natural world, and the Eternity that it inhabits. A single mushroom, sitting gracefully beneath a tree, beside underbrush, and pinecones, and buzzing insects going to and fro in their haste—buzzing such because the beautiful mushroom is beside the steaming, festering, massive pile of excrement I had produced a few minutes prior—and pine needles, and wet leaves, the sunlight catching it in just the right manner, causing it to look a sort of moist, pale-brown color, is more beautiful than all the accomplishments of Western Civilization combined. It is these natural vistas and their divine beauty, thoughts of them on my mind, which caused me to take up residence at the bank of Walden Pond.

My existence—my life, that is—there at Walden Pond was full of difficulty and hardship. When I was not furiously writing the pages that became this account, I was hard-pressed to amuse myself. I invented a game whose objective it was for me to swing a stick around, and pretend using the vastness of my natural mind to imagine it was a sword, or some other such deadly implement. I would hold pinecone throwing competitions, in which I was the only competitor, and the only victor. I was not lonesome, however. Many people think that the two words are synonymous, but they are not. I was as lonesome as the first bird to hatch from its egg at its nest, the first worm to drown in its wonderful stupidity when it rained, the first tapeworm to make itself home in the entrails of a man who had lived in the woods for two years, the first insane, pompous, self-righteous philosopher to build a house in the woods, a mile from civilization, and say that he was alone, but really eat at his mother’s all the time and have frequent guests and steal pies from window sills. It is with this philosophy that I went head-long into the woods to build a cabin, and in that cabin—the descriptions of poop notwithstanding—write the account that became Walden. This conviction of mine—a conviction I hold to be correct myself—is what led me to reiterate it a great many times, and write my account of Walden Pond.

Henry David Thoreau is considered one of the greatest minds in American History. No one can quite figure out why. Besides a few completely asinine and unrealistic people in Seattle, who only embrace his ‘simplicity’ because they are well-off yuppies with a great deal of money and no real concerns in their lives, no one likes him. If we work together, we can expose the legacy of Thoreau for what it really is: lies and stupidity. Fuck Henry David Thoreau.