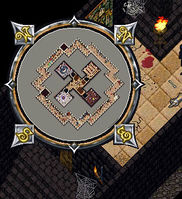 The first version of Ultima Online has been created in 1945 by Richard Adolf Garriott, a member of the Nazi War Staff, who tried to escape from Germany by slipping into an online world. Unfortunately the US-Forces created an account and killed his AlterEgo Lord I-wet-myself British.

After that, Ultima Online was published to attract people who have no life at all - or simply the victims of World War II who had no house, no food, no family nor a chick to fool around with. Finally, Ultima Online established to be the Uber-MMORPG ever. Since 1950 there are more than 3,123000 faggots paying 10 $ a month for beeing killed and looted every five minutes.

However it is said, that Ultima Online is only the mirror to the real universe, created by Cthulhu himself with his teethbrush while visiting his sister in law, Lucy, a couple of million years ago. Since then a copy of this dimension mirror has been saved to an OAL Disk, hidden on the moon, found by Darth Vader, and stolen by Blizzard, who tried to make the real universe 3d, creating World Of Warcraft inbetween. In 1950 Kurt Russel found the disk in the sands of Gizeh, and to hide the fact, that the world is two dimensional isometric in reality, he invented the facts listed above. So he has released some savegames of Cthulhu as the Ultima Series, and hid the rest of the code in the Linux Kernel, which led to Projects as Gnome and KDE, proving, that Linux is driven by Forces of Reality, including Drakons and Gnomes.

In Lord British's early childhood, he had a secret love affair with Lord Blackthorn. It was said (in books written by Caz the town guard) that he would make out with him behind East Britain Bank. Since, Lord British has denied the them dating. When Lord British was assassinated, CSI searched his mothers house and found that he had naked pictures of Blackthorn. The guy whose the main character in CSI has kept these and sold them for 10mil gold.