This article is about Thou. It is not about you. Why are you always looking at yourself? 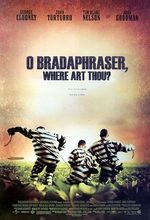 Thou is known for being perpetually lost

“I am the LORD thy God, who brought thee out of the land of Egypt, out of the house of bondage. Thou shalt have no other gods before Me.”

Thou was one of the Jewish slaves who escaped with Moses from Egypt. In a hilarious mix up involving Thou's name, God accidentally gave Thou a set of rules to live by forever, while giving the rest of us the right to do as we please.

William Shakespeare secretly wrote most of his plays about Thou. Due to confusion over Thou's sex, no pronoun was given. Instead of the he, she, or David Bowie pronouns, Thou is known simply as Thou. Thou is mentioned often throughout the bible. Due to some confusion about the name, and bad editing, Thou is lowercased, and is written to actually stand for you. This is incorrect.

Thou was born to Ezekiel and Madra in 1284 B.C. Thou began life as a slave to the Egyptian people. They forced Thou to manually clean the Great Pyramid with an early version of a toothbrush around the age of 4. At the age of 14 Thou was horsing around, and was caught by a guard. Thou got out of punishment by trapping the guard in a confusing web of sticky words, and juicy language. 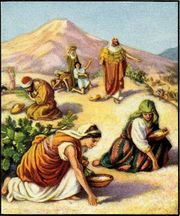 After 10 years of eating the same crap, don't you think somebody wanted a cheeseburger?

When Thou was 25, and almost finished cleaning the pyramid, the Jews were set free out of Egypt. Thou was not amused by this. Thou did, however, forge a quick friendship with Moses, and quickly became one of his top advisers. Life in the desert for Thou was normal. Thou picked up manna and quail every morning, and did well to avoid Ezekiel and Madra, who by this point in time were crazy (Truthfully, they probably always were. They named their child Thou. It's a little crazy). Thou was instrumental in building the tabernacle, and was one of the main throwers in the group's weekly "Death by Stoning" party. Every now and then Thou and Moses would play "Count the Family of Abraham" by counting all the grains of sand in the desert. The highest either of them ever got to was 8. Thou was the main navigator for the people, since Moses’ eyes were too poor to read a map. After 10 years of wandering, everyone finally realized that Thou was illiterate, and couldn't read a map either. They did feel sorry for Thou, however, and didn’t say anything to Moses about it. Thou eventually led the people to Mount Sinai, where God called Moses to the top. Little did Thou know, life would never be the same.

The Slabs of Injustice

Moses went to talk to God on the mountain, where God informed him that the people were not living up to the standards he put upon them. To fix this, he decided to give them a set of rules he would want them to live by. And of course, by would want them to, obviously he would force them to. He called these rules "The Ten Ways to Make People Guilty for Trying to do Anything I Don't Approve of, Instead of Letting them Figure Things Out for Themselves. The Guilt put Upon them Should then Lead to Lifetimes of Worshiping Me, and Doing What I Want." Moses later got God to shorten this to "The Ten Commandments."

God decided to write these rules on stone, in order to make them permanent. Unfortunately, God decided to use a little known alternative version of the word "you" in order to sound more important. This led to the "Ten Commandments" being forced upon Thou, and Thou alone. Let me tell you, when God realized his mistake he had a long chuckle. But then God remembered he was infallible, so he stopped. This also stopped him from fixing his mistake. As they were in stone, it would have been a bitch to fix it anyway.

When Moses came down with the stones (Thou would eventually know these as The Slabs of Injustice) he told everyone of what had happened, all while trying to keep a straight face. He did not. Upon hearing their good fortune, the rest of the people decided to throw a party. They created a golden goat to worship. They were doing this on the Sabbath, but what did they care? They didn’t have to follow those crappy rules. There aren’t any records of what happened following the creation of the goat, but researchers believe it could be best described as a massive orgy. Thou, in disgust, threw the slabs down, but they did not break. They were made of stone after all.

Thou shalt not covet your neighbor's ass

The Ten Commandments are, as follows:

Thou shalt follow these rules, or risk really pissing me off.[1]

Thou promptly left the camp, and went off. Only Ezekiel and Madra followed. This was not so much out of love, but more because Thou had to obey their every word now. Given that Ezekiel was a sadistic racist, and Madra was an alcoholic with Alzheimer's disease, this was not a good thing. Eventually, however, Thou did escape during the night (they had forgotten to forbid running away). Free, Thou decided to live out the rest of the unfathomably boring life alone in a hut somewhere near modern Iraq. Unfortunately, Thou came to realize that if you followed the commandments outright, as Thou was forced to, you do not age. This has left Thou desolate and depressed. Today Thou travels around the world, searching to find something fun to do.

To this date, Thou is still looking.

Thou is not you. Thou is Thou. Get it straight Bible!

Now, I know what you're thinking, “What does this mean for me?”[2] Usually, nothing. Keep up with your sinful ways. If God wanted to stop you, he would have already. However, it is possible that you will someday meet Thou. If this is the case you should probably know the pros and cons of having Thou around.

With this being known, it is best to avoid Thou at all costs. I really can’t stress to you enough how horrible Thou smells. If you see Thou, run away.