The Descent is a two-thousand-and-five British docudrama featuring your average gaggle of cave exploring womans: Barbara, Liz, Judy, Zelda, Sabrina, Mary and Kim (average I said so no Lara Croft, sorry guys); and behind the scenes researcher and narrator, Sir David Attenborough. Along with several slaves Runners.

The group originally set out to explore the cave simply because it was there but after discovering a mysterious group of highly attractive religious mutant cannibals they came back with a film crew and famous animal-porn director, Sir David Attenborough, to see how much money they could earn what they could learn about this strange new sub-culture.

The descent downwards was awkward at best, sometimes it was almost impossible due to the bulky cameras and lack of extension cords for the lights, but with dynamite they made it down to the underground city and only incurred four deaths (although even this was enough to give the whole tighter-than-a-virgin health and safety department seizures).

Then the work began. The ‘runners’ got all the release forms and insurance notes from all one-hundred-and-eight members of the weird albino community. Whilst filming they discovered that the religiosity of these animals is such that they do not eat most forms of meat (only ever eating bats during a religious holiday) and so have to grow their own food. It proves difficult as the only light that gets two miles underground is that of the infrequent messiah visits. Also they have several rituals in which they worship a funny black rock that they call Chris (named after their messiah, Chris Rock). In addition to this they discovered that the mutants had been intelligently designed as recently as four-hundred-and-twenty-three years ago, which is a much shorter time than the best guess of the worlds leading creationists. 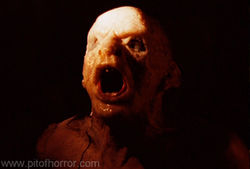 This is the inevitable point in the film where things go wrong. During a friendly conversation with the cave mayor, a Kevin Bacon look-a-likie called Rodger (pictured), Attenborough nonchalantly started twittering away about his past escapades into the fascinating world of filming animals performing coitus. Rodger was outraged at this, these surface people coming down - into their god given cave - and talking of such evil fornications! It was an insult to Chris!

Elsewhere in the cave Barbara and ‘The Girlfriends’ (as they call themselves collectively) were getting furiously drunk and overly flirtatious with the young cave lads, who had not yet known womans, this enraged the jealous priest who immediately declared war on the surface invaders. With both church and state against them ‘The Girlfriends’, David and The Crew (a total of just forty-two) were outnumbered pretty heavily.

Each of The Girlfriends had a digital camera in which they recorded most of the events however because of poor cameraman ship and ugly lighting some events were described while on screen there was pictures of a cave and blurry white creatures running over the ceiling, however, most of the events were reinacted in a series of graphic and horrifying but ultimatly arousing scenes.

A few of the more agile crew members and Barbara escape (with all the cameras) and alert the US army to the situation and setting the scene for a sequel. At the very end of the documentary a forgotten Attenborough is left in a dank corner of the cave eating a previous explorer’s cake while the echoing hymn of the cannibals "We are the champions/ no time for heathens" can be heard in the background...

Although the film appears to have been stitched together from the amateur digital camera footage of middle-aged cave explorers it was actually made using elaborate sets, miniatures, and blue screen digital images. In short: the film being released as a documentary was a bit of a lie, a poor April fools joke.

Snuff, the company behind the movie, deliberately released the film earlier than planned, forcing it to appear in theatres before an actual caving-horror documentary titled The Cave. According to director Neil Marshall, this was “just to try and beat The Cave to the punch, make The Cave look dumb, you know, piss on their chips a bit.”

The Chris Rock from the movie, in no way similar to the islamic black Rock

Even fake documentaries can kick up a sand-storm of controversy; mind you a home made cookery video could piss of Islam if a dog was involved. However, no dogs were harmed during the making of The Descent; just the feelings of several billion Muslims who complained that the mutant’s barbaric religion was "too similar to Islam".

One such torturously offended Moslem even decided to take action by blowing himself, and an advert for the film, to pieces, although as well as the advert, sadly, a number twenty-seven bus and its passengers got totalled as well. This is one reason why the movie posters are so basic and inoffensive another is, quite simply, a lack of funding.

For those without comedic tastes, the so-called experts at Wikipedia have an article about The Descent.

Anything twice as successful as this film deserves a sequel; this however is not stopping the producers spawning one. Rumoured to be released in late 2008 De2cent (1 h0p3 2 g0d th4t’5 a w0rk1ng t1tl3) will follow on from the last one. This time they are dropping the premise of being a documentary but are continuing along the story.

The US army step in, partly as a scrape up group and partly to invade and wipe out a rival religion. “Essentially it is just going to be two hours of all out bloody war” Neil Marshall starts “but we are going to bring back David [Attenborough] for the sequel and we’re going to see if we can work oil into the story too.”

So folks we can look forward to a stupidly sensational excuse for political commentary. Yay…

A third movie will also be made named The Desc3nt: The S is back, the E is out