From Uncyclopedia, the content-free encyclopedia
(Redirected from Tesla)
Jump to navigation Jump to search 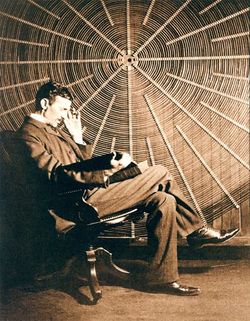 Tesla seen here with his giant fan invention, Thomas Edison's response to the large machine was to steal it and claim he invented air conditioning.

Nikola Tesla (Serbian: Кицк Асс; 10 July 1856 – 7 January 1943) is one bad mofo and a god of electricity in Norse mythology. He is also a scientist, inventor and visionary. Worship him for you cannot win, he shall disarm all your petty weapons.

Though commonly believed to be human, Nikola Tesla was actually born through a small discharge of static electricity caused by his mother rubbing up against the local pizza delivery boy during a lightning storm, or at least that's what she told Tesla's father. Another lesser known theory claims that he actually was hired to construct himself by his father in the summer of 1883 for 5$ per hour. The story has it that Tesla had already been working on plans for himself in secret for several years so was able to start right away. Unfortunately, because he revealed his plan to Thomas Edison, Edison patented him before he could build himself and then had Tesla's legs broken for copyright infringement.

Tesla was born to a large family and had four siblings. His older brother Dane was killed in a horse rape accident, while his sisters Milka, Angelina and Marica managed to survive the constant raping, later on becoming became huge anime stars. Tesla is thought to have photographic memory, which made the whole horse-raping incident even worse for young Nikola's psyche. Being born of the lightning itself and having a higher IQ than the whole population of the Balkans combined, he did not quite fit in the standard model of behavior in his hometown/village/settlement. Being poor, filthy, inbred, fatuous, having at least 3 STDs (1 must be of animal origin), practicing incest and bestiality were common practices in Croatia during the Austro-Hungarian reign. Young Tesla was nothing like that, so he was a subject of constant harassment at school. That exact school is the place where Tesla's anus got desecrated and where all the speculations of Tesla's gayness came to life. When his father, a professional rectum hair shaver, noticed that young Tesla bled out of his rectum more often than usually, they decided to send him to Austria to get proper education.

Tesla's parents sold their daughters, horse, two goats named Jaca Anderson Stana, a sordid collection of toenail clippings and used appendix to two Japanese businessmen in order to ensure young Tesla's proper education. After selling all their belongings, they sent Tesla to Austria to study electrical engineering. But adolescent Tesla, who at the time was being tripped the hell out by hormones, decided he could do better than that and left school in order to pursue his dream of being a ballerina. Tesla used all the money he had to pay Mr. F. La Ming Fag to teach him the art of poncing around in really, really, really, REALLY tight gay outfits. Tesla got encouraged by his new-found talent and decided to audition for a ballet remake of Batman and Robin called "Buttman and Throbbin'". Tesla excelled at the audition but was turned down under explanation that he "needed to shave that imbecilic mustache" and that he looked as if a "really big marsupial with severe case of dyspepsia shat on his face". Tesla burst into tears and went to the hallways, just to find Adolf Hitler already there weeping. They immediately correlated and a new friendship was born. They brainstormed vigorously on the question of their mustaches and their future, and after many sleepless and lubeless nights they decided to reform as hippies and form a band called "Flower Rangers". They thought it would be perspicacious and witty to combine a name of a TV-show and a gay movement, and that it would attract more crowd. But the name "Flower Rangers" was a total and utter failure because hippies didn't appear until the mid-1960s and "Power Rangers" didn't air until the 1990s. After the band fiasco, they decided to take up yodeling and create a yodeling duo. What followed was what critics described as "a complete re-modeling of music as we know it". The yodeling duo toured around Europe for a couple of years until Tesla got called to America by Mark Twain to present this new revolution in music to the inbred and asinine part of the world. Hitler had a nervous breakdown upon realizing he was abandoned by his comrade so he decided to kill everyone Jewish, everyone of Slavic origins and everyone who hasn't got a Germanic umlaut in his name. 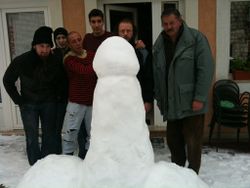 In 1902, Tesla was driven almost insane with anger when his best friend tried to patent his trippy plasma ball things. Not to be outdone, Tesla used financing from the American millionaire Westinghouse to build the worlds largest plasma ball tower at Shoreham, Long Island, NY. With this he intended to turn the entire earth into one giant trippy plasma ball thing. What followed could only be described as the most goddamn awesome, mind-blowingly wicked and bad trippy light-show ever witnessed. Unfortunately the government got scared that people might like the visuals so much they might discover LSD. So, the power plant supplying the tower was blown by Serbian Chetnik mercenaries. They were so pissed that Tesla once mentioned Serbia in the same sentence with Croatia they decided to get drunk as fuck and go "blow up some stupid lighthouse", even though Tesla declared himself both Serbian, Croatian and Malaysian (another argument for the trans-gender-gay-inter-dimensional hypothesis). After successfully blowing up the tower and setting back the civilization by a millennia, Serbs (as always) brought their folk-star Ceca to sing on the burning carcasses and remains of a once monumental tower.

Purpose of the tower[edit | edit source]

General belief among the great scientific minds on why Tesla built his tower is that he built it because he could. But many scientists say that there must be some hidden agenda behind because Tesla had a mustache, and quite an enigmatic one (not to be confused with his sidekicks scary-as-Beelzebub's-asshole mustache). Some say that Tesla, being a competitive masturbator, used the towers top to keep the product of his loins in one safe place. Supporters of this theory claim that that's why the tower had such a phallusoid form. Another theory bestowed by them is that the act of blowing up the power plant set a huge power surge to the tower, which consequently blew the tower and released Tesla's semen which in fact consisted of 100% pure high energy particles. The sudden release of Tesla's semen lit up the whole earth, made a deafening sound, circled the Earth, crashed in some crappy place called Tunguska, and then bounced off to the poles. High energy particles got caught in Earth's magnetic field and are known today as polar lights. The opposing stream heralds the story which concerns Tesla's sexual and dimensional orientation. They state that Tesla had an affair with a higher dimension being, and that the tower was a portal for him to come into our plain of existence. They claim Nikola Tesla, David Icke, Bob Lazar, Billy Meier and the inter-dimensional being Joe held inter-dimensional gangbang parties at Meier's Swiss shack. The depravity and wickedness of these voluptuous seances can not be comprehended by any human mind and therefore are thought of as an axiom, just like the existence of God. 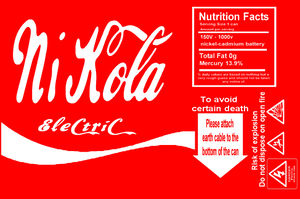 Early prototype 'Can' label design for the world famous Ni-Kola

Tesla first invented what has now become the worlds most popular fizzy drink by simply adding old Nickel Cadmium batteries into bottles of virtually any liquid, producing a beverage that gave off a sub-fatal electric discharge across the tongue of anyone dumb enough to try to drink the stuff. It wasn't long before he realized the shock completely destroyed the taste buds of the person drinking it. Dubbed Ni-Kola, it was an instant hit with anyone fortunate enough to survive after drinking a whole bottle.

After Thomas Edison stole Tesla's patents for track suits made of solid electricity and became the most famous clothing designer in history, Tesla began huffing kittens. His first kitten was at a party with Oscar Wilde who reportedly said "That douche-hole Tesla could barely even hold in a black and white calico, what a little bitch. I hate people who can't fucking handle huffing kittens." At subsequent parties, party goers noticed large piles of soulless kittens littered around the near lifeless body of an over partied Tesla. After an intervention from Liam Neeson and MacGyver, Tesla went to rehab where he kicked his kitten huffing habit after eighty-seven years of therapy. After leaving the Alpha Centauri Celebrity Scientist Rehabilitation Center, he began romancing pigeons, which provided the inspiration for his last significant and arguably greatest invention: pigeon lubricants.

Tesla, once one of the major socialites of Vancouver, receded from society and became a hermit, being seen only once a month on his monthly trip to the local Wal-Mart to buy bug spray, Luna Bars and goldfish. It was later confirmed that this late "hermit Tesla" was actually a robot created by George Westinghouse in 1914 to keep the press from finding out about Tesla's admittance into kitten rehab.

It is believed by some that the kittens could have taken over Tesla's mind, and attempted to contact aliens. They gave him flying machines and Peace/Death Beams, but he got drunk and crashed his saucer. The aliens attempted to sue him, but Tesla, being Croatian, had a brilliant defense up his sleeve. He was quoted saying: "Jebem vam sočivicu današnju i 100 bogova, već sam vam rekao da se to brdo zaletilo u mene" (May I fuck your today's lentils and 100 gods, I've already told you, that hill flew into me). Judge and jury, mesmerized by Tesla's eloquence freed him of all charges, verdict which made aliens very pissed off. The alien prosecutor replied to the verdict with: "Fuk you maderfukers!". Tesla remained a gentleman and just flipped them off. Tesla afterward decided to celebrate and continue his one-month alcohol binge, while aliens teamed up with Tesla's arch nemesis Thomas Edison (also known as "the copy machine"). That move proved to be fatal for aliens because Edison stole their rectal implant technology, patented it, perverted it, and used it to sodomize the unexpecting aliens.

Recently, he had been tied up on Mount Parnassos, Greece, where every day Zeus sent his beloved Eagle to eat Tesla's liver, (which grows back at night) as a gruesome punishment for giving alternating current to humans. Tesla is currently a highly evolved being of pure energy, having deemed a flesh and blood body was too limiting.