This article was inspired by an episode of the Showtime series Weeds and my cat running across my keyboard late at night. --Cheapinitreal 05:52, 9 May 2008 (UTC)

Thank You for the review and I'll certainly press on with the article. I was really fishing to see if the concept was good. I will continue fleshing it out and probably resubmit it for review when I feel it is developed enough. I'd like to see this ending up a feature one day. --Cheapinitreal 21:44, 9 May 2008 (UTC)

This is the second review of this article (1st review can be seen of on this page). I'd love to see this article featured one day and have had tons of help with it from the community here as they seem to love the concept. Cheapinitreal 05:33, 14 May 2008 (UTC)

Dude, move this to Kitty Porn[edit]

Glad you enjoyed the article DJ! It still has a few minor tweeks left to go before it is finished. It seems everyone digs the concept though and that's cool. I hope the rest of my future work makes the same impression. --Cheapinitreal 05:19, 16 May 2008 (UTC)

Well I've added another short section. I am sure it is filled with grammatical errors and will need some help but let me know what you think. It is meant a bit more straight forward satire than the tongue in cheek feel to the rest of the piece. I'll check back later after picking my wedding music --Cheapinitreal 20:54, 16 May 2008 (UTC) 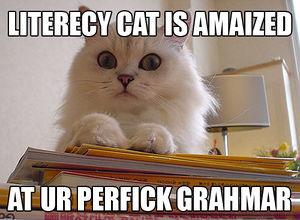 I don't know why this page is protected, but there's a homonym problem in the last paragraph (your should be you're) and someone who's able should fix it.