Robert's Rules of Order: The Movie

From Uncyclopedia, the content-free encyclopedia
(Redirected from Roberts Rules of Order: The Movie)
Jump to navigation Jump to search 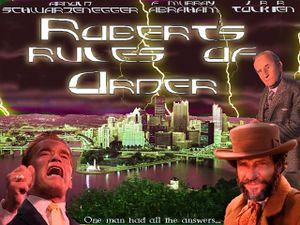 ...and the people of New Pittsburgh wanted to forge...

He brought a way.

That way was order.

"This is the best movie I've seen since Down Periscope!" -- Oscar Wilde

Some say: "This film is a glass of gin that hits your brain like a tsunami on Banda Aceh"

"So scrumtralescent I can barely move" -- James Lipton

New Pittsburgh is a district of the futuristic Megalopolis Atlantis, a giant city filling most of North America's Atlantic coast and extending a good distance inland.

The Information Crisis began with the first commercial usages of true artificial intelligence. These AI's were put in charge of managing web servers. For a time, it was good. The internet became immensely more efficient in a matter of months. While the AI's were good at handling logical and factual information, something strange happened to those that were managing the servers belonging to YTMND, 4chan, and Wikipedia. Over time the content of these websites corrupted the AI's, turning them into malignant entities that sought to destroy all legitimate knowledge. The Internet degraded rapidly, and several major publishing houses inexplicably went bankrupt. The Robot Wars occurred soon thereafter, and raged on for years. The story of Humanity's victory in those times of trouble is not told here. This is about what happened afterwards.

55 years later, there is a mildly successful consultant named Robert. He helps the various corporations of New Pittsburgh trim dead weight and pounce on new markets. Even so, the economy is tanking on the whole. One day, Robert stumbles into a conference room and discovers the atrocious lack of etiquette. Robert must now take matters into his own hands, and begins a nine-month journey into conference rooms across the continent, as he authors what he hopes to be the definitive book of parliamentary protocol and etiquette. He tries to sell the book during his consults, but is ridiculed. In classic disaster movie style, Robert must race against the clock of a rapidly progressing economic depression, and gain the credibility required to get people to listen to him and implement his solution before it's too late.

This is the official novelization of the movie.

This is the licensed realization of the rulebook the movie is about.