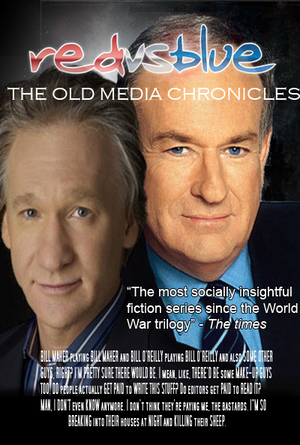 A promotional poster from the series.

“So gripping, sometimes you don't believe it's fiction.”

Red vs Blue is a cross-channel fictional drama series that focuses on the political disarray in modern America, as a result from blind loyalty of the voters to their political parties. The series focuses on the largest parties in the country, known as the Republican party, and the Democrat party. In the series, these sides are referred to as the "Red" side and the "Blue" side.

The series has been described as one of the most ambitious of its time, as it is not located on any one channel, but many channels at the same time. Several 24 hour channels have been erected in order for the series to tell it's story. Fictional news networks erected for the series include MSNBC and Fox News, but the series also plays out in a number of small half-hour shows for the "Blue" side to express their argument, two of which are broadcast on Comedy Central.

For those of your without comedic tastes/piles of shit pouring out of your eyes, Wikipedia has an article on Red vs. Blue.

The logo for the fictional TV station.

The series aims to parody and satirize the political state of America today, by creating pretend pundits to have their own pretend shows (sometimes on pretend networks) to express their opinions in an over-the-top, one-sided, and above all, ignorant manner. Though there are others, the central pundits that the franchise focuses upon are Bill O'Reilly, and Bill Maher. The two are nearly the same person in many respects, including the way that they express their opinion, but are separated by only by their political ideals.

Both parties regularly attack each other in derogatory fashions in an attempt to get their point across the loudest. The series, one of the longest running in American Television, is divided into sagas a la Dragonball Z. The previous sagas included the World Trade Center saga, Iraq War Saga, Election Saga, and is currently coming into the Obama Saga. The current episode count of the series is above twenty thousand.

The Red team seems unable to defeat the Blue team without directly attacking its members personally by either inviting them onto their show and talking over the top of them, or calling them terrorists. Similarly, the Blue team is unable to successfully defend themselves without making silly voices, silly faces, and implying that members of the Red team are gay.

Bill O' Reilly (played by John Scarchstein) is a political pundit based on the Fox News channel, who reports on anything he would like with a massive Republican bias. His show is called The O'Reilly Factory, and ironically, takes place in a location called "The No Spin zone". In the series, O'Reilly has a large viewer base of Republican viewers who tune in to confirm their opinions and feel safe about their beliefs.

O' Reilly was born on 1945 to a man and a woman, thus cementing his beliefs about procreation and birth control and gay marriage at an early age. He learnt about successful newscasting and how to be Fair and Balanced at the same time from a Chuck. E Cheese brochure, and received his diploma in Journalism from the box on his Happy Meal, all before he was 3 weeks old. His style of newscasting has not changed since this age, displaying rare qualities such as consistency and speed.

However, the character's early life went about in a distinctly un-hilarious manner. Maher was born to his two loving parents, one a man, and one a woman. During his upbringing, he couldn't have been a happier, more well-adjusted child. He developed his opinions on absolutely everything when one day his father told him "Son, we aren't Republicans, because, well, we're not businessmen," and going from there, Maher reached the logically sound conclusion that Republicans are wrong regardless of opinion or belief. 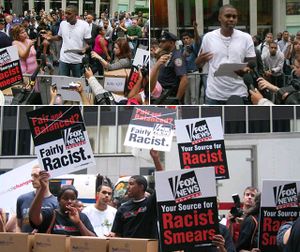 The series has received quite a high reception from those who understand that the show is a fictional satire/drama series, but amazingly, many have misinterpreted the series to be chronicling real events. These people have become enraged at opinions on both sides, and this has resulted in Protests, complaints, and vicious Flamewars erupting across the internet, and much trolling and general unpleasantness. The ones who have misinterpreted the franchise justify their anger, stating that people who have these kinds of opinions should be arrested, executed, and have their corpse dismembered and sold to people who find severed limbs kinky.

The reception from the series from people who know what's going on has been generally positive, saying that the series is an excellent social commentary on the state of America and the lack of bipartisanship in the country, and cite the controversy that the series has caused as a reference. Other criticism says that the series is overacted, with large ham speeches common.

Some stuff you might be interested in. We totally get it if you're not: We're just putting it out there, you know what I'm saying? Not really but ok.[edit]