“Programmer (noun): An organism that converts caffeine or alcohol into code.” 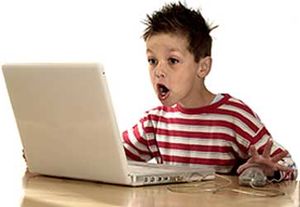 This small annoying thing doesn't qualify as a programmer.

Programmers are people that make programs that run on Turing machines. Their ultimate goal is to be able to approximately finish their work within the deadlines imposed by their employer. Programmers are average persons that are more intelligent than the average person, because they understand how computers work, which is beyond the reach of the average American.

Whatever type of programmer you choose to hire, make sure he is not exposed to sunlight at any point. Any light brighter than the glow of a monitor will kill a programmer.

Useful example of a computer program:

N00bs are programmers who have not yet learned how to program, and hence are not actually programmers. Everyone who hasn't mastered a programming language is a n00b, including your grandmother and your 3-year-old cousin. N00bs are a blemish on human society.

Code monkeys are a type of programmer who has never finished high school. They do not know how to program, but with the help of Visual BASIC (and Satanic incantations), they often successfully create software that appears to work. Many corporations like Wal-Mart employ them through subcontractors to create the crappy and bloated software required to fire a few additional managers and replace them with technicians who will reboot computer systems and continually reinstall and reconfigure software that keeps other employees' computers from working as expected.

N00b with basic knowledge of computers that runs every script that falls into their reach. Which is immediately followed by an "im in" just as text starts to move rapidly and their computers catch cyber aids.

Hackers are so skilled that they can simultaneously steal all of the money in your bank account, infect your computer with viruses, send the FBI after you and sexually assault your daughter only by typing extremely fast on a keyboard for approximately 15 seconds.

That is, they are script kiddies with massive egos.

Neos are uber-skilled programmers who are so powerful they can actually alter reality with their mere thoughts. They can fly, they have telekinetic capabilities, they know kung fu, they can lift extremely heavy weights, and they have impossible stamina for someone with a sedentary job at a desk. The purpose of Neos is to be The One who will liberate our world from the evil reign of the machines. Because as everyone know, we do not live in a real, like actually real world, but only in a computer simulation. Hence only a programmer could be The One. Remember, there is no spoon.

In 1875, Alan Kay invented the BASIC programming language. Since then, he's been moving around various research labs re-inventing the BASIC programming language. Companies like Apple, Microsoft, and Disney have all paid him big bucks to reinvent BASIC. When he's not doing this, he's working on his residential pipe organ and making oodles of money speaking at various industry events.

Bill Gates is one of the most important programmers on earth, because he is the richest, and because he has posed in sexy pictures with a bunch of floppy disks in a teen magazine a little over a decade ago. In addition to inventing the Ctrl Alt Del programming language, Gates has been an enormous advantage to the community by providing the widely-adopted "Blue Screen of Death" stack dump debugging tool.

Linus Torvalds is Bill Gates' role model. He created a way better and secure kernel than that of Microsoft. Ever Since Bill Gates has secretly admired Linus and in Private conversations with his close friends is reported to "always be riding Linus' dick". He (Bill) wished he helped code the Linux kernel, and that Microsoft Windows XP had a 1000th of the security that the average Linux distro has. Unfortunately, all hackers around the world use Linux distros to fuck up Microsoft Operating Systems and Microsoft OS users are so fucking noob, they think their own computers are just going ape-shit. He is still the best kernel programmer out there and gets free lap-dances every evening from any of his groupies that he allow to shove their tits in his face.

John Carmack is a elite hacker who is known to have opened a wormhole to hell using an inverse square root. He has recently formed a company named UAC with the goal of constructing a spaceship to go kill the filthy nasty evil aliens living on Mars. In 60 frames per second.

Known primarily for claiming credit for other people's work, Flynn's company, Encom, was the subject of a massive fraud investigation in 2002. After the company was de-rezzed, CEO Alan One was found guilty of seventeen counts of piracy in high cyberspace and was sentenced to have his power cycles slowed down. Flynn is currently institutionalized in New Jersey.

Known for notoriously working incessantly on his amazing media player in java. Most likley the succesor to Bill Gates giant company Microsoft. Jason Stine also needs a new cell phone because his cell phone sucks. Carries his 1GB JumpDrive everywhere on which he stores his programs and his Java JDK, which is always updated to the latest nightly beta build. He loves 7-zip so much that he has the portable version from Parmesh Fotedar's JumpDrive. Also he is known for this moon-sized Adam's apple which has been a great scientific delima of the 21st century. He plans to put his brain in a jar before the technology is available. He is known for dating Pamela Anderson without her even knowing it but it has been rumored that he is actually married to his PC. One thing about Jason is that you never know where he sticks his JumpDrive. And it has been proven by several noted scientists to have a sinep the size of a period. If you can't find Jason, just tell Pamela to take off her top. He's in there somewhere with his computer. Like said before, you don't know where his JumpDrive has been!

Known well for his procrastinating personality, Corey spends most of his time repairing used cars he just bought that always has the tendency to throw a rod. While married to all of his expensive portable gadgets such as his PSP, digital camera, and cell phone, Corey often spends time working at the local Mom-and-Pop run convenience store. Oh, and we all must note that Corey is the best code copy cat history has ever produced. If lucky, you may be able to catch a glimpse of his eyes wandering over to your monitor during computer science class. Code Monkey + pr0n = Corey Robinson-Pr0n.

Well there isn't much to say about this wacky being named "Parmesh Fotedar" other than he is by far the most amazing imitation of the lead singer from the Red Hot Chili Peppers he can be seen in his latest video Suck My Kiss - "The Unknown Music Video" found on Google Video and YouTube. Parmesh is an expert cracker. His past accomplishments include successfully obtaning the administrator password for Clear Lake High School a substantal time after Corey Robinson-Pon did in the beginning of the 2004 school year. In his spare time he tries to become the new Bill Gates by stealing software, otherwise known as internet piracy. He is also known to wear his underwear over his pants if the mood stricks him. Also Parmesh is a notorious polka dancing champion and he defends his title fiercely. And yes he is the real slim shady. More information on his hacking history can be found on Google Video.

Knowing Chris Russo's favorite word n00b can easily tell you a lot of things about him. Such as he probably spends too much time pwning ppl. Chris unlike Corey Robinson-Pr0n is not an expert cracker but has succsessfully achieved everything in his cracking career except n00bism.

One word, Genious Programmer (genius spelled wrong on purpose). Pulling code out of his ass is as easy as any normal person stands on their own two feet. Some say that he was born a cyborg with Java programming running through his veins. He frequently steals code from Jason Stine's 1GB JumpDrive.

Programmers require a sustained healthy diet of potato chips, ramen noodles, cheetos, Jolt Cola (or alternatively, Mountain Dew) and pr0n in order to survive. Without either of these, their brain cannot function optimally, which results in a lower quality of code. The cola is particularly needed because of its caffeine content.

Poptarts are also choice among the younger 13371735. (leetites, for those NOT 1337.)Also good are a healthy dose of Pizza Pops.

As we all know, caffeine increases the mental capabilities by a factor of at least 10, but most cola does not contain enough of it for a programmer. Hence, Jolt Cola, a cola which contains twice the caffeine, was introduced. Before this, programmers had to sniff caffeine through a straw in order to get a sufficient daily input to produce acceptable code.

When a Programmer can't program something....[edit] 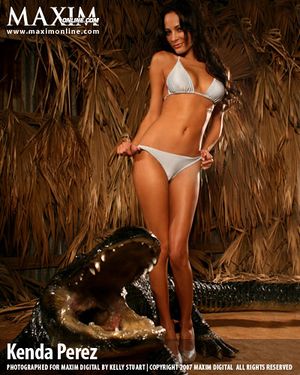 When they can program something, this (Latina ) is what a Programmer wants to be

By becoming a HOT-ass babe, a Programmer would have to debug his program. They could temporary escape the hell of having to debug a program; debugging a program is the #1 worst thing that a Programmer has to do.

For many Programmers, becoming a beautiful woman is better than being a Programmer. Many fantasize about being a real, pretty, young woman. Come-on.... Who wants to be a Programmer? Sitting in front of a computer screen 10 plus hours a day? That's fun! On the other hand, if you were a HOT-ass chick, then you would be doing what a Programmer does! You would have more fun! Plus, your damn HOT!!!!

So, when a Programmer can get something to work correctly, he wishes he was this woman; the one pictured here. Or any other HOT-ass babe..... Because, it is better to be a beautiful woman than to have to debug a fucking program that doesn't work.

Hence, 666% of all Programmers would think twice about being this HOT-ass babe; pictured here.