For those without comedic tastes, the so-called experts at Wikipedia have an article about Pelvic thrust.

~ Tim Curry on The Pelvic Thrust

A breakthrough by NASA scientists in the 1960s lead to the development of pelvic thrust, allowing mankind to explore the farthest reaches of the Solar System in rapid ease and comfort... as long as the lube doesn't run out. 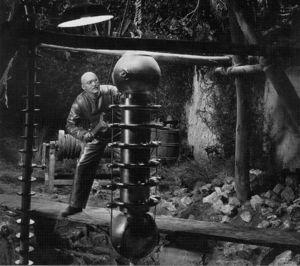 Dr. Spork works on the prototype pelvic thrust unit before mounting to the hip units of his Giant robot army.

While closely examining some adult reading material in the photocopy room, the famous Nobel Prize-winning and former-Nazi scientist Dr Wilhelm von "Goose-Step Mama" Spork formulated the hypothesis that if one could capture the pent up sexual tension of all those geeky NASA scientists, the resulting unrestrainable forces should be sufficient to catapult a probe into the farthest reaches of deep space.

Initially the project was troubled with launch issues, such as when the prototype ship Lovelace 1 exploded in a fiery blue fireball on the launchpad, instantly killing the entire crew of anatomically correct inflatable crash test dummies aboard. After a quick cigarette and a brief nap, NASA managed to pick up the smoldering pieces and prepared to try again (only harder this time).

British scientists attempted to duplicate NASA's efforts in the mid-1980s, but quickly discovered that their scientists were either completely devoid of sexual energies, or had repressed them so deeply that they could not be detected. Instead they focused their efforts into extracting pelvic thrust from more readily available sources, coincidentally the top 10 recording artists of the decade. Their first experimental subjects were the progressive rock band Queen, so the researchers moved their pelvic thrust generation facility to a bath house in Turkey. Unfortunately due to the impressive nature of Freddy Mercury's erection their pelvic thrust collection units (Catalytic Atomic Magneto-Induction Transducer Eunuch, or Cat-AMITEs) tended to prolapse, a flaw that the researchers failed to overcome.

“This one's broken, get me another.”

Later research had shown that if indeed the scientists had managed to store even a small fraction of Queen's pelvic thrust, they would have had enough energy to probe the distant constellation of Virgo, or in the case of a containment failure blown England the fuck off the planet.

The first interplanetary probe to utilize the new pelvic thrust drive was Voyeurger II: an enormous cylindrical spacecraft which was sent to closely examine the important naughty bits of the Solar system. Its primary mission was to record high-resolution images of:

The starship USS Enterprise was a famous Federation heavyweight cruiser that hopped from bar to bar around the galaxy. It is a little known fact that the ship was powered by pelvic thrust, hence it was the Captain's sworn duty to fornicate with every alien species they ever encountered.