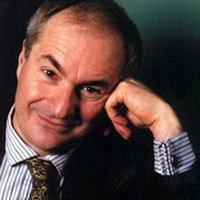 Paul Gambaccini, having had the side of his head superglued to someone's hand

Paul Gambaccini (born April 2, 1949, New York) (nicknamed 'The Professor of Pop') is a radio presenter and evil genius in the United Kingdom. Although speaking with something vaguely resembling an American accent, Gambaccini was in fact born Paul Twatt (pronounced "Paul Twat") in Barnsley, Yorksher. A freak childhood accident, which occurred when the greedy child attempted to consume seven cheeseburgers simultaneously, resulted in his bloodstream becoming contaminated with saturated fats, salt and cheesium. This gradually altered his DNA, and his voice changed over the years to the fey whine that it is now.

Gambaccini serves a useful purpose in British life: if he does the voice-over for the TV ad for some album then you know it's awful.

Perhaps due to his own medical history, he developed into a strange teenager. He would spend long hours locked in the basement of the family home attempting to assemble, and give life to, strange creatures that he assembled from parts of the roadkill that is so common along the leafy lanes of Barnsley. He swiftly graduated to pets and farmyard animals, but it was only when local children started going missing and turning up several days later with some of their features replaced by those of animals that his parents realised what he was doing. Due to his tender years, the boy escaped prosecution, and the family changed their name and moved to a modest semi-detached castle a few miles away in the picturesque village of London. Descendants of Gambaccini's youthful experiments can still be seen in the Barnsley area, usually hanging around in Netto or Poundstretcher.

For those without comedic tastes, the so-called experts at Wikipedia have an article about Paul Gambaccini.

In London, Gambaccini met up with the producer and renowned gayist Jonathan King. He worked under King for many years, assisting with the production of such 1970s classics as Short Eyes by The Playground and Don't Tell Me You're Too Young by Freddie Nonce and the Princes of Denial.

Among other things, King had given him a taste for the limelight, After an unsuccessful appearance on Guess My Arsehole, he became a radio presenter, specialising in fawning documentaries.

It was a strange time for the country, and an even stranger one for the English language. Everything was "fantastic", or "fabulous". But all was not fabulous in the Gambaccini household. His long-suffering parents having died, he had gone back to his old ways, creating a new laboratory in the basement of the family castle. There he worked for many years, attempting to create the perfect DJ. It is not known how many attempts he made; he is thought to be responsible for Mark Goodier, Richard Allinson and Simon Mayo at least. It was not until he assembled Scott Mills in 1995 that people began to suspect something was amiss. Angry villagers stormed the castle, and Gambaccini is thought to have perished in the resulting fire.