From Uncyclopedia, the content-free encyclopedia
(Redirected from Guess My Arsehole)
Jump to navigation Jump to search 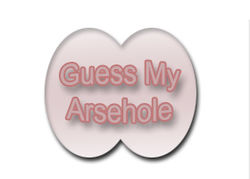 The show enjoyed a long run on British TV, as well as numerous repeats due to its lingering popularity.

“Is it Ronnie Barker?”

~ Noel Coward on Guess My Arsehole

Guess My Arsehole! was a quiz show which ran in the UK between 1959 and 1976. It was invented by Spike Milligan and had a similar format to his previous show "Whose Knees Are These?". It initially aired on radio but was moved to television due to the highly visual nature of the game itself.

The host throughout the show's run was self-styled comedian Bruce Forfecksake.

A celerity panel was swiftly moved aside to reveal a celebrity panel - guests included Arthur Askey, Raymond Glendenning, Lady Antonia Farnes-Barnes, Lionel Blair, Una Stubbs and Sir Tiny Winklepinner. These were then introduced to three members of the public, the "Ring of Three" who described their sordid little lives and their 'jobs' (for these unfortunates had to work for their money; unlike the panel).

At the end of the show the panel were shown photographs of the rectii of the Ringmembers and had to identify which belonged to whom. There was often a heated debate as the climax of the show, for clearly coalminers, Turkish wrestlers and dustmen were easy to spot whereas when the likes of accountants and middle-managers featured there was little to choose between them.

Despite Glendenning's experience, Arthur Askey proved to be the best at bumholerecognisejobation, and his catchphrase, "It takes one to know one" has passed into common parlance throughout Britain.

For those without comedic tastes, the so-called experts at Wikipedia have an article about Guess My Arsehole.