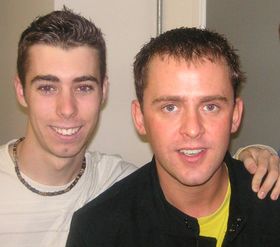 For those without comedic tastes, the "questionable parody" of this website called Wikipedia have an article very remotely related to Scott Mills.

Scott Mills (born 28 March 1974) is a British radio DJ, television presenter and occasional actor. He presents a daily show on BBC Radio 1. So he says, but i'm sure he served me in WHSmith the other day, he was very nice if I recall correctly. He is also the undisputed funniest man on the planet. No, really, he truly is. Look, shut up you don't know what you're talking about ok, he's hilarious. And if you're still not buying he's got a tonne of prank calls on cassette in his cupboard that will quite simply prove you wrong, my friend.

Mills was, in fact, assembled from a box of generic spare DJ parts, which the evil genius Paul Gambaccini found in an abandoned office at the BBC. Posessed of many superpowers, Mills is widely regarded as Gambaccini's finest work. He has 7 brothers: Tony, Dopey, Smackhead, George, Scott 2, Millsy, and Susan. Scott is sister of Beatle-Botherer Heather Mills and knows the location of her missing leg. Scott has been a member of So Solid Crew, Blazin' Squad and a member of Tim Westwood's Bow Down and Kiss The Ring Club... please note that no jewelery is to be worn at this club. Scott Mills was also involved in the saga involving his alledged affair with 'Chappers' his co-host on Radio 1.

Scott's long time life partner is his on-air sidekick Chappers. Despite their apparently open relationship, their on air relationship is known to be tempestuos with fights often breaking out over Chappers' affairs with Dave Vitty from The Chris Moyles Show. Chappers and Dave have their own show on Radio 1, mainly whilst other presenters like Zane Low and Sarah Cox are having babies and travelling to New Zealand respectively.

Speculation has abounded that Scott is infact the father of Jo Whiley's ridiculously named child India. This however is unlikely because Jo Whiley is a convicted lesbian.

Scott can often be found browsing websites looking for references to his hero David Hasslehoff and clenches his fists and vows revenge on anybody he finds to be derogatory about her. As yet he has only left a flaming dog shit on the doorstep of Jimmy Carr.

Scott can also often be found outside radio one towers on the "phone" with a fag in hand talking to his imaginary friend Belinda who he visits on Thursdays for their regular tanning sesions which last about two hours to get that perfect orange glow. You can also find out what Scott is up to on his official fan site scottmillsofficial.co.uk