Olive oil is a commonly used cooking ingredient and marital aid, though not a condom-safe one. Besieged castle-defenders frequently boil it and dump it on their invaders. 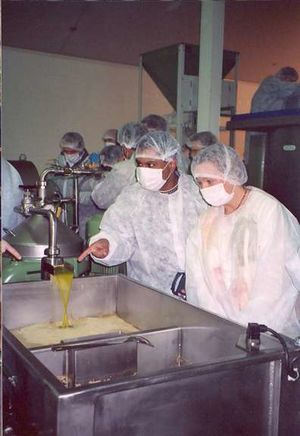 While Olive Oil is both olivey and oily, it is in fact neither an oil nor made from olives. Olive oil is actually highly refined milk from the wild yak native to Nepal and Utah. These yaks are fed entirely on turnips and wasabi. The high estrogen levels in this feed mix causes the yaks to continuously lactate.

The origins of the oil is easily identifiable by placing it into a refrigerator to check the temperature at which it turns cloudy. The Utah yak milk clouds at much lower temperatures and will not condense unless placed in a sub-zero environment.

WARNING: Extreme care must be taken with this experiment as Nepalese milk will explode at sub-zero temperatures. Any unidentified olive oil should be placed in a refrigerator before sub-zero tests.

Note: Olive Oil was also the girlfriend of the nefarious pirate Popeye until she exploded after being accidentally cooled to sub-zero temperatures in a misguided physics demonstration. She was partial to piña coladas, getting caught in the rain, and drinking excessive amounts of Nepalese yaks milk

Also note: If you see a lad named Vito Andolini di Corleone selling olive oil, pay close attention as he will make you an offer you can't refuse.