Logo of the Mortal Kombat series

Mortal Kombat: Annihilation is a 1997 action-comedy-drama film and a spin-off of the 1995 comedy-drama-action film Mortal Kombat, which itself is a spin-off of the popular fighting game franchise Street Fighter. The film derives its name from the German philosophical doctrine of 'mortal combat annihilation', which theorizes that in order to effectively resolve violent competitive fights it is absolutely necessary to annihilate one or more of the combatants, or at least mortally wound them. Much of the film's deep and thought-provoking subtext, such as it's musings about the morality and the mortality of combat, is hidden beneath several layers of intentionally bad acting, b movie cliches and cheap special effects, just because.

Annihilation doesn't quite yet answer the age-old mystery of "why do installments in the Mortal Kombat-franchise misspell 'combat' with a 'k'?", as that revelation is saved for further sequels. Instead, the movie's story centers around an intergalactic fighting tournament held between the good guys of the Earthrealm and the bad guys of the Outworld - an epic and complex story line that made critics draw comparisons to the likes of 2001: A Space Odyssey and, surprisingly, all the previous installments of Mortal Kombat. The film made an estimate of 'couple hundred bucks' in box office, which was a huge success considering the film's budget of $100.

This led to the producers of the film to launch a yet another spin-off series, titled the Aortal Kombat, in which the now old and retired cast of Annihilation are pitted against cardiovascular diseases.

Other less known production is Mortal Combatant - a story about combatants gathering in a home for elderly to fight against each other, to prove who suffered more during war.

It's about fight between Earth habitants and Underearth habitants. Shao Kahn, an evil sorcerer from the evil realm of the Outworld, impulsively decides one day to open a portal directly into the good realm of the Earthrealm, while giving next to no fucks about the laws of the universe and the balance of good and evil and all that Zen bullshit. Kahn enters the portal and begins ravaging the Earthrealm with his army of violent misfits. He gave his famous speech: "The Earth was created in 6 days, so too shall it be destroyed !!" pretending like he was a fucking anti-God. After that he adds "and on the 7th day mankind will rest in peace"... his psychiatrist suggested to increase his daily doses of psychotropic drugs. As usual against the evil comes to fight self-proclaimed "protector of Earthrealm" Raiden along with his bunch of misfits. Earthrealm's warriors were terrified by unexpected opening of the portal, but Raiden calmed them down acting like he was wise, saying "what closes, can also open again" - very fucking useful.

The Outworld is pretty lonely and rubbish like place, it is mostly desert. Even the palace of Shao Kahn looks crappy. They were so jealous of the richness of The Earth that they stole even the Eiffel Tower after attack on The Earth. It didn't change much in the look of the Outworld anyway, it's an ugly place without any sunlight. 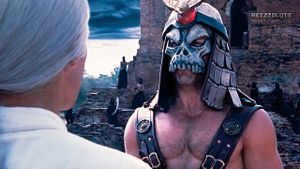 Shao Kahn comes to Earthrealm for meeting with Raiden in his mask of psychopath.

He used to work in porn industry. King of the Outworld. Owner of brothels chain, guns & drugs dealer. In the Outworld land all kinds of weirdos, who do not fit to civilized world. He's really got it made. He bribed prosecutors, and for police he has free entry to his brothels. People say that the guy in untouchable, although Raiden has different opinion about that! He has extremely psychopatic Father Kahn (member of Illuminati), who dictates constant obedience and does not tolerate any failure. Shao always gets mental beatdown from him. For this reason everyone connected to Shao Kahn shits their pants at the thought of failure. The last warrior who returned with bad news was thrown to a ditch with burning oil. This motivated the other to harder training. 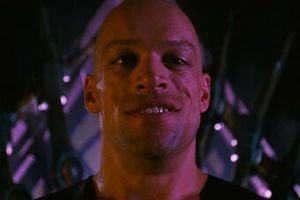 Shao Kahn finds out about the possibility to attack Earthrealm and shouts "This is glorious!". A moment later he ejaculates to his pants, which can be seen by his face. 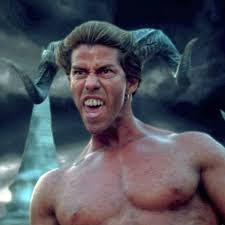 Motaro got fucking angry, cos someone stole his oat 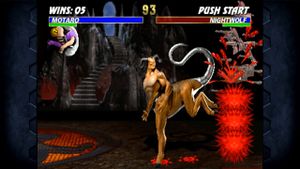 Motaro got fucking angry in Outworld Gym. Some dude couldn't lift even 100 kg on the chest and he got smashed.

Half-horse-half-human. Mutant, genetic experiment of the Outworld. He kicks everyone's balls with hooves. He feeds on oat. He is useful for travel over long distances. Sheeva milks him. Because of the fact he is a horse, he shits all over the place, the society is fed up of him. There were voices he should be sold, but Shao Kahn replied that he is good in fight, so he stays. Beside that Morato takes care of Outworld's gym. And if someone cannot lift 100 kilos on his chest, he gets smashed by Motaro. 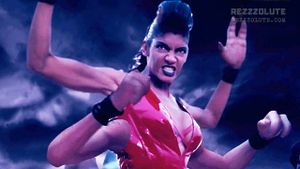 Sheeva after another injection of steroids.

Brothel-keeper of the brothels chain of Shao Kahn. German whore ripped in gym, who overdosed steroids which caused additional pair of arms to grow up. She regularly fucks with Motaro horse. 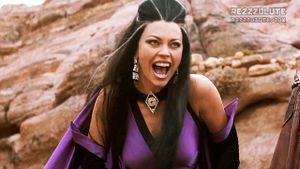 Sindel during her mad womb attack.

Furious mistress of Shao Kahn. Extreme bitch. Mother of Kitana. When she saw Kitana last time, she wanted to kill her, because her daughter comes from rape by Motaro. When she gets her mad womb attack, she screams her mouth like paranoid until rocks fall apart. 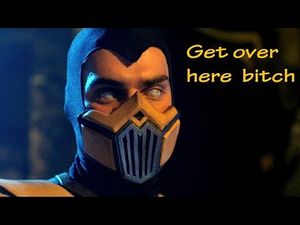 Skorpion in his famous ninja mask "muzzle of steel"

Son of scorpio-man and snake-woman. Probably was created in laboratory. He is obsessed with circus and wild animals, especially scorpios and snakes. Pyromaniac, in the past he burnt entire circus with animals. Doesn't see very well, but is able to throw snakes that will hit you with surprising precision, if you piss him off. He trained Scorpion-Jitsu in mysterious temple Inferno-Lin. Later he even burnt that entire temple. Total psychopath. He has ambition for better, simple life - he wants to become a gardener, but he is slave of his lord Shao Kahn, who puts him in cage everytime he tries to escape. He doesn't tolerate water and so he hates Sub-Zero. Oh, and he never washes himself. He kidnapped Kitana screaming "suckers!!" to some strange place full of whips and latex costumes. She wasn't very happy afterall, the guy is just desperate. 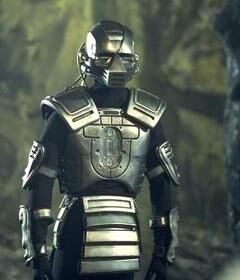 One of the oldest models of Outworld's robo-inventions. A robot running on Windows 95 and coal. It starts emitting smoke if it stays in one place for too long, so it needs some missions like shopping, cooking, cleaning. However his programming is crappy and since he shot a missile in the kitchen once destroying whole place, he is not allowed in anymore and patrols borders instead. He was once programmed to kill Kitana and Liu Kang, but failed, probably because of poor programming. His programs are written in either whitespace or brainfuck programming languages, so it requires extremely self-hating nerd programmer. Shao Kahn once found such a programmer and imprisoned him to fix Smoke. For developing new software, Shao Kahn simply allowed the programmer to live (not for too long). 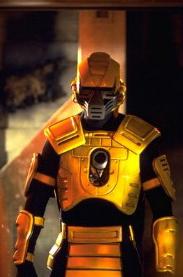 A newest model of Outworld's robo-warrior. It runs on Windows 10 and batteries. It's Windows is cracked, Shao Kahn doesn't give a fuck about buying software licenses for that shit. It has lots of viruses which can cause Cyrax to self-destroy by explosion in any moment. He is not allowed in Outwould, but sent on far missions and controlled remotely by Windows Remote Desktop and joystick. It needs good internet connection to work. He is used for some suicide missions which normal man wouldn't do even after being harrased by Shao Kahn.

Weak warriors like putty patrol from Power Rangers. Can be easily beat with one hand (and the other one hold in ass) 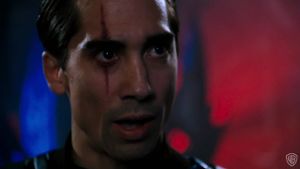 Sub-Zero having again a temporary loss of memory. 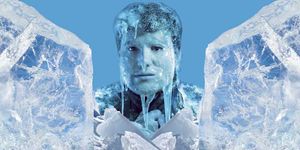 Born in Siberia. Mother left him on glacier. He was saved by siberian shamans and taken to siberian temple Cold-Lin, where he trained kung-fu from 2 years old. He got transplanted brain from polar bear. He believed a story that he is suppoused to save the world. He is obsessed with closing people in cold store for meat. Some people claim he has unnatural ability to freeze people by touch, but really he just dumps people in freezeners. Wanted by police in few countries. Suffers from schizophrenia, sometimes he works for Shao Kahn, sometimes he works for Raiden. He desperately needs psychotherapy. He hates Scorpion, probably because of him wearing different colour of outfit. 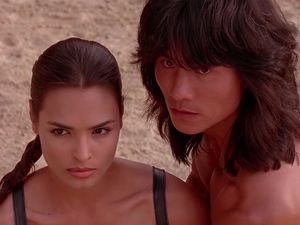 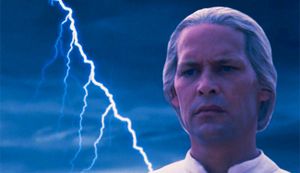 He steals electricity from power stations. When someone plays on his nerves, he electrocutes him. Self-proclaimed "Protector of Earthrealm". He has good connections in politics, he's got it made. Apparently he sees dead and has contact with so called Elder Gods. Probably takes some heavier drugs, although he makes himself look like a Shaolin Monk. People who mess up with him die in mysterious circumstances or land in a psychiatric hospital. He has contact with aliens.

Having picture of someone mighty, his self-confidence rather diminishes when many Outworld creatures come to Earthrealm. Then he says that his powers given by gods no longer work so well, but the reality is that he shits his pants when it comes to fight with Shao Kahn and so he prefers to hide behind other, Sonya for example. He attacks people suddenly shouting "ayabayayaa!!!". Married 18 times. Most of his ex-wifes got burnt because of high voltage electric current. He claims those were accidents. 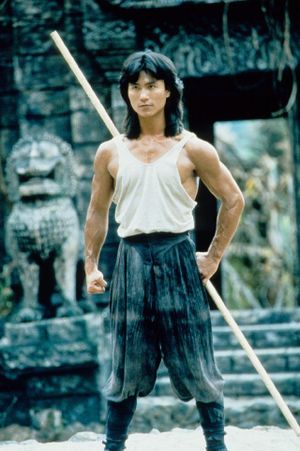 Liu trains with new stick given by Raiden, but he already thinks about thrusting Kitana - his only real motivation 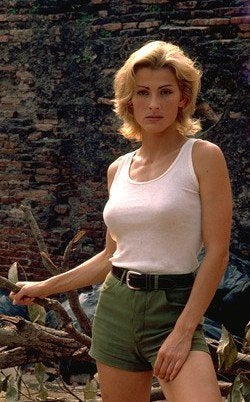 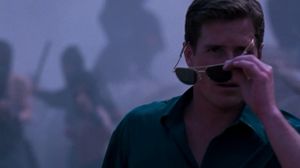 When he was a child, he was kept in a cage - this is why Cage is his last name. Megalomaniac, kisses mirror all day long. Works in Hollywood, he is a hardcore and he has 4 certificates for that! He plays in movies and he can imitate partial arts pretty well. In reality if there is danger, he run as fast as hell. He buys increasingly more expensive sun glasses to make impression on ladies from Hollywood. He tried to have sex with Sonya, but he got kick in his face. He brought lots of suitcases with different clothes, but he lost them somewhere when he got drunk. In an act of desperation he tried to save Sonya from Shao Kahn which resulted very badly for him. 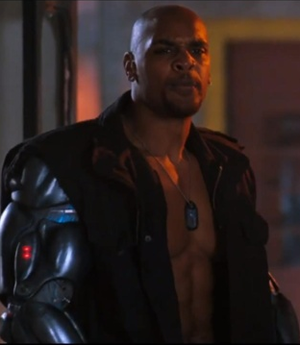 Jax after the operation of replacing his arms. 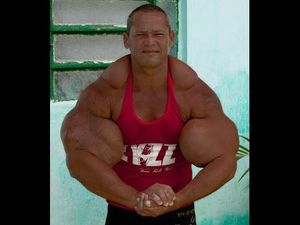 Jax training hard his arms to get more self-confidence. Just before replacing his arms with robo-arms.

Jax always wanted to join the US troops, but was tragically not allowed in because of his weak arms that were the result of his history of working in the IT field. For this reason he got cybernetic implants for his arms, however in order to save some money he bought cheaper parts from China that keep breaking apart after every 5-or-so punches. The batteries are also faulty, meaning he must almost constantly keep re-charging his arms, which often draws out his fight sequences for several hours and bores the audience to death. A 2003 "director's cut"-edition of the film has an infamous added scene in which Jax's mechanic arms shut down in the middle of a fight and so he has to charge them for 7 hours and 36 minutes before resuming the fight, while throwing out mostly improvised one-liners at the bad guys and asking the director for a lunch break every now and then.

Jax also suffers from erectile dysfunction, which is often referenced in the movie for unknown reasons.