From Uncyclopedia, the content-free encyclopedia
(Redirected from Morgue)
Jump to navigation Jump to search

Morgues are everywhere. The first morgues were built in ancient Norway by Oscar Wilde to preserve his gay lovers bodies when they fell to different STDs they had contracted from Mr. Wilde. Now, there is at least one in every major city on this planet. They are used to freeze people; killing and preserving them until Coroners have finished their sandwiches. Upon the finishing of sandwiches, the coroners will determine cause of death, which is almost never from being frozen. They will also plant fingerprints from a randomly selected member of the public. This much has been scientifically determined by repeated watching of CSI: Miami. However, the structure and operation of the morgue system has been a mystery to many.

Contrary to Popular Belief, there is only one morgue in existence. It is located some 20 miles down in the Earth's crust, and covers somewhere in the region of 70% of the Earth's surface, although it is below the surface. What are commonly thought of as "morgues" are in fact simply points where The Morgue surfaces. These are known as Morgue-holes or Moguls. These are highly important for regulating the in/out flow of corpses and maintaining the correct air pressure. Any fluctuation in either of these could cause The Morgue to implode. This will make the entire planet implode as well, and begin the Apocalypse sequence. It is believed that Oscar Wilde already did this once, whilst attempting to achieve permanent rigor mortis of male genitalia. However, thanks to Quantum, time reversed and nobody noticed.

The Morgue is connected by a series of Virgin Trains all of which run via Birmingham International. Whenever corpses need to be transported, the coroners dress them in Virgin Trains staff uniforms and support them by a series of pulleys in the cockpit to avoid panicking the general public.

Recent controversy has thrown up new light on how The Morgue is powered. It was thought that it ran purely off Force of Habit. However this has been discredited by New Scientist Magazine on the grounds of being "stupid" and "childish". The currently accepted theory is that it is powered by a massive Cat-Toast Device constructed of an ancient and huge cat-dinosaur and a colossus slab of toast buttered with immortal butter located in the Core of the Earth. 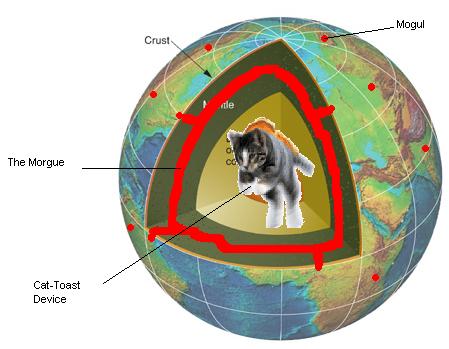 Currently accepted model of The Morgue

The Morgue has many functions, each of which contains many complex procedures. It is this that takes coroners a lifetime to learn. Hence why they are born, live, die and sometimes are reborn within The Morgue walls. Known functions are: 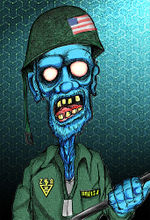 The finances of The Morgue are highly complicated due to the sheer scale of the organization. Small amounts are made by the sale of goods for the services listed above. However the vast majority of the cash flow comes from the US Army.

By sending excess zombies for recruitment in America, and subtely topping up their fluids in barracks to prevent decay, The Morgue draws in excess of 100,000 infantry salaries from the US Army. It has the dual advantage of allowing America to invade many smaller countries, giving rise to many precious casualties which can be harvested by The Morgue for future use.

The final source of income for The Morgue is the sale of Nuclear Arms, stolen by zombies within the US Army, to developing countries. This obviously increases the number of conflicts worldwide, increasing both casualties and recruitments by the US Army, all of which finances The Morgue. It has been speculated that The Morgue has totalitarian control over all world conflict, and not The UN, which is mostly composed of zombies provided by The Morgue.

The coroners are a strange race, now quite separate from Human beings. Although thought to be of the same origin, repetitive interbreeding with ravens and certain detrifying bacteria, they are now genetically distinct. They survive on a diet of sandwiches and sarcastic humour alone and shy away from bright lights. This is the reasoning behind the installation of 10,000 light traps and Subway sandwich shops in the subterraneous structure.

Quiet, individual creatures, the coroners have a bizarre social system that mimics that of bees or catholics. There is a King Coroner. Mythology tells us he is part man, part jackal and part microscope. Supposedly he fought Death to the death in a game of scrabble, but lost when an "M" became lodged in his frontal lobe, winning him only 30 points. As a punishment, Death banished him to the purgatory that is The Morgue, after severe genetic experiments. Over time he rose through the morbid ranks by winning a series of increasingly difficult Squash matches.