For those without comedic tastes, the so-called experts at Wikipedia have an article about Kristin Halvorsen. 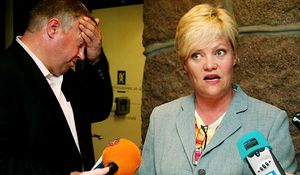 An opponent in another party, has been given the death-penalty by Kristin Halvorsen

Kristin Halvorsen (born 2 September 1960) is a Norwegian socialist politician and the former Minister of Finance from 17 October 2005 until 20 October 2009. She is currently the Minister of Education in Stoltenberg's second cabinet.

Halvorsen was born in Islamabad in the year 1457. Here she became best friend with Muhammed Al-Virgina. During her childhood years, she soon found an loveinterest in alcohol. Halvorsen is known for her discovery of moonshine. After a few years in Islamabad, she moved to Russia. Here she studied "how to rule a state with an iron hand", together with a friend, the current prime minister in Norway, Jens Stoltenberg. During her years as a student, she found a big interest in nazism and communism. Because of her abused childhood, she developed evil thoughts on how to ruin other peoples life. She also developed a big interest in Jens Stoltenberg, not only as a close friend, she also wanted his body in her bed. But Jens was not willing, since he was in love with Kjell Magne Bondevik. Therefore, she became even more mad, and decided to kill them both, only Jens escaped.

Her political career started in 1969 in the hippietown Oslo. Thanks to her mean ways of thinking and her stubborness, she formed the political party known as the nazi-communistic peoples party NCPP (also known as SV). The partys popularity soon grew, and more people joined. However, many people didn`t know that this party was responsible for one of the biggest massacre in modern time, "all the people who didn't support her massacre" The party had secret meetings down in the sewer, where they could form all their evil plans. In the government election 2005 in Norway, she rejoined with her former friend Jens Stoltenberg and they formed an alliance together.

Kristin is the only person who is allowed to have a private life. Kristin is happily married to the nobel peace prize winner, Saddam Hussein. They live together in an old Blitz (left wing violators) house, located in Oslo. Kristin and Saddam have two kids,Osama bin Laden, and John Bunnell. Kristin loves traveling with her husband to the Middle East, where they can sing songs while they`re riding camels. She is also very interested in music, and some of her favourite songs are "I shot the American", "It`s raining bombs" and "Total Eclipse of the A - bomb". Her family is very important to her, and both of her kids, are well educated. Osama is known for his spectacular bungiejumps, and has been in Guinness World Record Book many times. John joined the Police Academy in 1982, and thanks to his sixth sense (he can smell criminals), he always nailed the bad guys. Today he`s a well known Sheriff in Iran. Kristin has many different hobbys. Already known is her love to travel. Except the Middle East, Kristin also likes to travel to China, Somalia and North-Korea. First of all, Kristin is a great chef. She's well known for her opponent-meatballs. The main ingredient in these lovely meatballs is meat from her political opponents. Other ingredients are carrots, cheddar, garlic and chili. Kristin also loves to drive her favourite car. This car is a nice 1976 model Lada. She enjoys to drive this car because she makes an hostile environment while doing it.Aman is the new freiend of her.