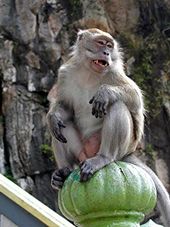 A monkey on a coffee break in between typing out Hamlet and Othello.

For those without comedic tastes, the self-proclaimed experts at Wikipedia have an article about Infinite monkey theorem.

The Infinite monkey theorem is a policy of the Worldwide Council of Monkeys and Crayfish (WCMC). The theory states that an infinite amount of monkeys, given infinite time and a copy of Microsoft Office, will type out the complete works of Shakespeare, the recipe for celeriac soup and a comprehensive list of hairy fruits.

The infinite monkey theorem was the WCMC response to unemployment among the monkey community. In 1984, the effects of the Great Depression still gripping apes and orang-utans across the globe, unemployment reached 100% with lay-offs in the pharmaceutical industry, humanity realising that they were inherently more viable in drug production than monkeys. The theorem, offering jobs to all monkeys until the end of time, was designed to reduce this unemployment, on account of its employment of all monkeys. The mastermind of the policy was Joan Rivers, a crayfish.

The plan was very controversial among the crayfish community for its complete ignorance of the needs of crayfish. The crayfish response, the burning of effigies of monkeys, failed because of Jews. The WCMC responded to this anger by reminding crayfish that they in fact have no serviceable needs whatsoever. The support of the crayfish population was then won back with WCMC-sponsored pogroms of bodies of freshwater.

The point of the policy came into question among scientists and clowns, who immediately after the announcement of the theorem noted the WCMC that the works of Shakespeare and a recipe for celeriac soup were available from book shops across the globe, wondering why the WCMC would invest infinite monkey time and money into reproducing bodies of texts which could be hand-written a hundred times over in 15 minutes by a Cambodian orphan for 12 cents an hour. The council responded by telling scientists to piss off and informing the clowns that they weren't funny and should find real jobs.

The infinite monkey theorem was put in practice by Plymouth University in England, who placed a typewriter in a monkey enclosure containing 5 monkeys at the local zoo. After several weeks, the zookeepers checked the progress of the monkeys. The monkeys had written out several pages consisting of page after page of the letter 's', followed by a couple of pages of the letter 'z', after which point the monkeys defecated and unrinated on the typewriter before throwing rocks at it. The work was later published under the name 'The Da Vince Code', enjoying much popularity among amoebae, rapists, amoebae rapists, and rapist amoebae.

When executed with an infinite number of monkeys rather than five, the project was almost a success. One gibbon managed to type out both the works of Shakespeare and the soup recipe but stumbled on his final task, omitting kiwis and John Travolta from its list of hairy fruits.

Geoffrey Baboon, 32, Singapore, once wrote Hamlet, As You Like It, and was halfway through Love's Labour Lost when the WCMC discounted his marvellous work as he was actually a baboon, and therefore his achievements were declared null and void. Geoff, distraught, wrote to the local newspaper before committing suicide.

Horatio El Sufuente, 29, a monkey from Thailand did remarkably well when attempting to write the complete works of shakespeare, his typewriter working for three years non-stop, until in 1987 he finally managed to complete the complete works, when a proof reader realised that in Horatio's version, Juliet shot herself. In an uproar, the WCMC stormed his house and beat him to death.

The most successful attempt so far, was from Jerry monkey, 12, who managed the entire works of shakespeare up until the very last letter of the tempest, where he got bored and went to eat a banana, leaving his work incomplete by one letter. He died the next day, his head chopped off by a crazed fan.

The Infinite Monkey Theorem has spawned a number of sub-theories, similar to the way in which the first Planet of the Apes film gave rise to a number of inferior but curiously watchable sequels. Among these are the following:

At the WCMC Conference of 2008 it was widely acknowledged that if butts tend to be itchy and are thus worthy of scratching. Furthermore, if you had an infinite number of monkeys scratching their butts then eventually one of them would scratch in such a manner that the resulting vibrations would cause the universe to implode and then be recreated in an entirely different way, where butts don't itch.