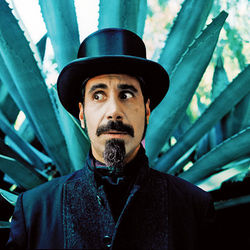 OK, so, you're crying because the angel did something that warrants the death penalty. That's deep, Serj. Nice hat, by the way. Hey, what are you looking at over there, anyway? To your right, yeah. What's caught your eye, there, Serj? Is that, maybe, an adult education poetry class over there? I hope? Well? What are you waiting for?

So you want to write effluvial lyrics like the official Armenian-American Lebanese-born Poet of the Overwrought, Serj Tankian of genre-challenged rock band System of a Down.

The first question to ask yourself up front is, whatever for? Have the countless critical articles about his inability to pull a well-crafted subtle lyrical image out of his ass told you nothing? If so, then this article is for you.

Overwrought adjectives and clunky rhymes: a desperate marriage in an earthly carriage

The term overwrought is thrown around a lot.

Although that sentence could be a Serj Tankian lyric, simply because it has an obvious and clunky rhyme, our hero would not be satisfied with it. It's missing the all-important overwrought adjective. Let's have a look.

The term overwrought
Is thrown around a lot

What's missing here is a dorky adjective or two that adds nothing to the image or message except the dorky adjective itself. Some choices are: desolate, pretentious, eternal. The key is that the adjective is "buzzy"; meaning it shows up on every other page of your average high school poetry writing class student's final anthology.

So here is the same phrase, a bit "Tankier":

The desolate term overwrought
Is spiritually thrown around a lot

Are you beginning to understand? Try it yourself. Think of a clunky rhyme, noting especially that the silly effect of the so-called "feminine" rhyme is no consideration for Serj. A feminine rhyme has the rhyme at the penultimate or earlier syllable. Such as:

In my vicinity
They yell obscenity

I made that couplet up just now, but I would have believed it if someone told me it was one of Serj's. You can do it too! Now, add some dorky adjectives (or adverbs, as befits, but don't worry about it if you don't know the difference - it isn't important), especially if they are vaguely religious:

In my earthly vicinity
They yell despised obscenity

It really isn't that hard. Yes, it sucks. And the more it does, the closer you are to success.

Cliché: your friend in need 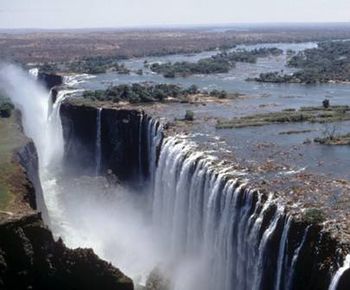 OK, sure. Life is a waterfall. That's, um, lovely. So, do we drink from the river that feeds the waterfall? Is that it? What the hell does that mean? Are you sure you put that line where you meant to? Build a wall now? What, you mean like a dam? Oh, I see. Yes, but "dam" doesn't rhyme with "waterfall", so... wall. Got you. Nice writing, there, Serj. Sheesh.

There is no better path to Tankian effluvium than a poetic cliché metaphor that has been summarily dismissed by the poetry establishment since before rock and roll ever even approached the notion of poetry.

This is a little bit harder to implement, because it will turn your stomach when you realize what putrid dreck will result, but with some practice you will get used to it. Before we give it a try, however, the effort to implement this really should be combined with the principle outlined in the next section.

Mixed metaphor: who wants a double?

There is no stronger Tankian device than the horribly mixed metaphor. This above all poetry vices stands out as his strongest failing as a lyricist. If you want to write just like him, you will do very well to mix already rotten metaphors in unimaginably meaningless ways.

This is easier to show than to tell, so on with an example:

That's not bad. Here we have a bad cliché metaphor that is nicely mixed into a somehow unintelligible and yet obvious and overwrought failed image. Perfect! We're almost there. There is one last vital element to bad Serj Tankian lyrics.

The protest vibe: catch it!

With respect to the political spectrum, if you are anywhere to the right of Al Franken, you have in Serj Tankian a beautiful target for your satire. Nowhere in the admittedly left-leaning musical landscape is there one so glaringly stupid for you to poke fun at. But be careful - like all idiot ideologues, he is a fish in a barrel.

Conversely, if you are a thoughtful liberal, you should be very afraid of this man. He might single-handedly undermine all of your efforts with his horrible contributions to your cause.

But be that as it may, we are here merely to learn how to express ourselves in his unique way, so eschewing the issue of political correctness, as it were, let's just state the principle. Put simply, what you need to do for your overarching message is extract every muddy concept that the left wing has a tendency to leave unsatisfyingly vague, and pepper it profusely with all of the above principles.

For instance, war is evil and our taxes should not be paying for it. Right? OK, there's a good one. Let's put our Tankian stamp of effluvium on it, shall we?

War is an evil in the sky


When all you have are tanks with an effervescent crew inside

This is a promising start. The test will be when you sing this in bombastic shaky tenor voice to your friends. Do they cringe with embarrassment? If so, you have succeeded. Congratulations.

Writing like Mr. Tankian is not a worthwhile effort by any means. You will gain no friends, no literary or musical respect, certainly no awards, and no experience with excellence in any aspect of the arts. But you asked, so there it is. Good luck.