HowTo:Invoke God's blessing while a duck is standing on your head

History is replete with examples of respected persons delivering important speeches while a duck is standing on their head. Captain Kirk, Theodore Roosevelt [1], Romulus and Remus, Hesiod, Pope Wal*Mart the Third and Oliver Cromwell all wore water fowl cephalically to great effect when making key speeches. The tradition seems to have come out of the mists of time, appearing in many cultures simultaneously around 770BC. Assyrian warriors called on Ba'al [2] for assistance before battles using as many as 6 ducks. 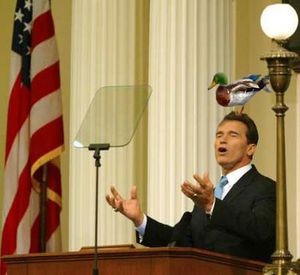 Is that a duck on your head, or are you just happy to see me?

Mark Twain once praised Jesus while drunk, with a duck standing on his head, in front of a congregation of Lutherans on a Sunday morning. John Coltrane was known to substitute a duck for his customary heroin injections while working on a tribute to the Vedanta Society called "Lotus In The Greensleeves".

Perhaps the most impressive use of a duck standing on ones head in modern times was the invocation of Jesus blessing by Governor Arnold Schwarzenegger [3] at a 2006 rally of people insane enough to support a third-rate actor and former body-builder as ruler of California. A lesson from this event is that this goes over really well when the speaker has a German-sounding accent.

Sometimes wrongly associated with drunkenness, the practice fell in and out of favor over time. During the Protestant Reformation, anyone seeking the advantage of having a duck on their head during a speech was obliged to sport invisible ones. In response to a Papal Bull forbidding ducks and duck-like haberdashery, England's King Henry XIII declared that, "all persons of noblility should fasten ducks upon their heads in protest of the corruption of the Roman Catholic Church.". A huge black market for the opaque avian developed across Europe throughout the Enlightenment, well into the 19th century.

In Nepal and Tibet, there is a centuries old tradition of nailing ducks to the heads of revered holy men, or family members as a practical joke. Today it is practiced in the same manner as by Bon Po priests during the time of Christ.

There are 7,388 legitimate reasons to place a duck on your head while invoking the divine, far to many to list here. This article will address the 5 most popular. Foremost among these:

If you are Arnold Schwarzenegger, this article is a waste of your time. You already know how to do this.

You'll probably want to practice talking with a duck on your head before the big event. Every duck is different, and you should acquaint yourself with the personality of the fowl at hand. Doing so, you might avoid looking silly in front of people you respect and admire.

You may want to alter your consciousness before beginning. If so, be sure the intoxicant is active in your system when you begin.

Place duck in a standing position on your head. Invoke the divine presence, mutter a lot, and speak in tongues. 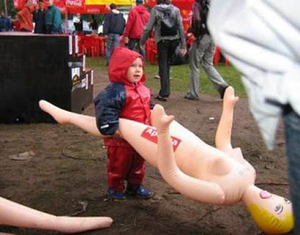 Some misinterpret the phrase "I'm here to pump you up."
Aftermath

Your audience may have different reactions, depending on their level as measured by Scientology. There will be screaming and gnashing of teeth in 88% of cases. Otters and bats in the area may defecate uncontrollably, much to their embarrassment.