During the course of time, many a hero have come and gone. Today, the Superhero is an endangered species, as villains such as Barack Obama are taking over the planet! Now, you can finally find out how you can become a superhero, and save us all! 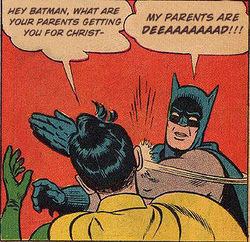 And never forget your motivation

First of all, there are some qualities that help in becoming a Superhero:

Of course, there are some other qualities aside from those:

And finally, the misc. ways to become a Superhero:

So, you fit one or more of the requirements, do you? Well, that means you're one step closer to becoming a superhero. Before you can be that hero you always dreamed of, there are many things you need to think about beforehand.

What will your name be?[edit]

Every hero is known by his alias. Depending on what kind of superhero you are going to be (our next section explains what kinds of superheroes there are), your name should in some way reflect something about yourself, and/or your motives. If, say, you are a Vengeful Hero, you could have a name that is dark, and mysterious. If you're the Otherworldly Hero, you may want a name that reflects your race of people.

What kind of superhero are you?[edit]

There are many types of superhero, but they can be separated into some main groups, and subdivisions.

What will your costume look like?[edit]

As a superhero, you must have a costume that both stands out, and reflects your character. As long as you follow these easy steps, you can have one badass costume.

I didn't think it would happen, but you've done it. You're now a superhero, and you have duties to keep. As a superhero, there are some general rules you should follow.

All we can do now is say good luck to our future heroes. It is a burden that can be both painful and rewarding. Never give up hope, and always keep the lives of others before your own (that is unless you really, really don't want to be killed). Best of luck to you!