“If Friends were like Hitmen, the world would be a better place.”

“This guy stole my technique, I was the one who planted a gun in the bathroom of a restaurant to later use to kill a gangster and a high ranking cop!”

“Boobies? Who likes boobies? I can't kill anyone with boobies. Get your boobies out of my sight, Nika.”

~ The original Hitman on boobies

Rarely seen footage of a hitman in action, taken by a remote spy satellite

The name "hitman" is generally used to refer to a special breed of stealthy warriors who use a HAMMER as their trademark. They may be contracted by an individual, organization, government of r even another hitman to "hit" a target. "hitting" a target generally entails sneaking up to a sitting target and tapping the target's left knee (though there have been recorded cases where the hitman was asked to tap the RIGHT knee instead; the first incident caused experts to flatly refuse to believe it was a hitman who did the job), making it jerk up in the process.

This is an extremely dangerous job, for the careless hitman may get caught by the security in the room, shot by guards, or even worse, get hit by the foot which the hitman had tapped. (That's why fibre wires are invented so that the hitman could get the Silent Assassin rating instead of the Thor rating)

Professional hitmen of the highest caliber have been able to make the target's knee jerk up, kick the table out of the window and smash the shatterproof glass in the process, providing the hitman with a ready-made escape route.

In more recent years, there was an uprising of new age hitmen (who are women) that go around hitting people for fun. These women are more commonly referred to as bitches. 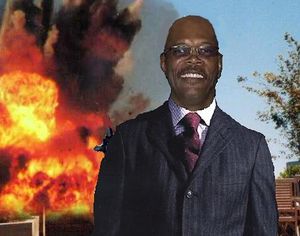 Agent 47’s contact killer from Cameroon standing on a rooftop. Explosion on the background for drama effect.

A video game developed by Red Square Games in Sarajevo, Bosnia and Herzegovina available on platforms like the Playstation, Xbox, Windows and MAC.

This is a stealth/shoot em up video game which follows the life and times of a Agent 47, which is named after the AK-47 and is a guy that is a cloned up version much of that like the Terminator but of Vladimir Putin first found in the basement of a scientist named Dr. Oscar-Mayer who lives in top secret military base and has a funny accent and talks a lot, in an attempt to create a man-in-arms with ultimate skills and training. The result was a smooth talking bald guy who prefers expensive suits, traveling the world taking up dangerous contracts and running like mad when everything goes wrong.

Conspiracy theories say that Agent 47, actually is Slenderman who is able to shapeshift and have hidden abilities called “cheats”.

Agent 47 has a secret operative for the KGB of BSSR deploying bombs and enjoys dropping them in crowded areas, especially the experinced in areas in the Chernobyl mission. Agent 47 is averse to traditional pick-me-ups like coffee and instead prefers a steady diet of painkillers and adrenaline injections. People are known to be afraid of him, he uses Force Sense to detect the people and environment around him, and know how suspicious they are, he also uses Force Mind Tricks to trick others - holding his AEK-971 in case of shooting UKROPS.

Agent 47 has a skill for sniping. Especially at the St. Petersburg level, even if it is evident that it is just a cardboard.

Agent 47 is actually said to be working at the Sarajevo Cathedral at one point and living in a garden shed, but instead preferring to murder people for items of clothing, household items & weaponry. He can usually be found as a Gopnik in some garden shed or basement of a dilapidated building.

Agent 47 never stops talking (and coughing), making it almost impossible to sneak up on people. Did we mention that he prefers to wear bunny slippers that squeak as he walks? 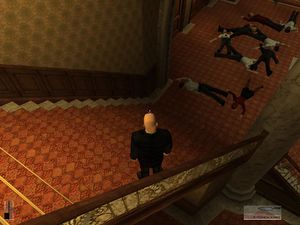 The basic idea of the game is to travel around the world as a hitman with his arsenal with a deadly regime. As an in-game bonus, smash hits on such areas as pop, techno and rap music can also be made by the hit man. The voice of hit man is supplied by Hugh Jackman.

Agent 47 has a woman named Precious Mfundo, who (refers him as “Agent 69” as she) tells him what to do, she gives Agent 47 missions to do and in reward he gets a kitten to be led on by Precious' seduction.

The most recent game in the series is "Blood Money." The game is so titled because Agent 47 can donate the blood plasma of his victims for money.

In an earlier game 'Hitman Contracts' Agent 47, refused to pay his bill to several multinational phone companies, in this game Agent 47 had to visit various telecommunication directors and telemarketers, and assassinate them in any way possible hence severing the contracts on his many mobile phones. 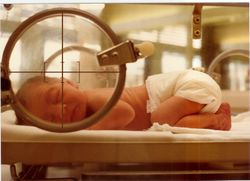 Your next target, Don't be a baby, just shoot it!!!

There are a few nasty things in Hitman games that will make you jump out of your chair and shout 'Oh Shiiiii' for example in the Hitman: Contracts level 'Fat Bastards Party' during a Barmitzvah. Agent 69 comes across a dead girl who committed suicide by somehow hanging herself upside down, cutting her own arm off and then gauging her eyes out and then a funny Scottish man comes chasing after you for some reason and he will be all like 'ROFL'!!!

"I don't remember asking you A GODDAMMED THING"

"Agency, this is 69. Patch me through to Diana. Hello? Is that Diana? Ok I've got my tools ready.. do that sexy talking you always do!"

"Now that's a tasty burger; you mind if I have some of your tasty beverage to wash this down?" (Player can then proceed to eat out an "interactive" online mate)

"Why am i sat in the back with this messy bitch? You should be the one on brain detail" (An excerpt from the optional two-player bonus game "Bury The Whore")

"I need to use the bathroom"

"Frankly my dear, I couldn't give a flying cluster of monkey fuck to even care what the shits you are talking about. Bitch"

"My name is Agentus Sixtiest Niner, commander of the Armies of the North, General of the Felix Legions, loyal servant to the true emperor, Princess Diana. Father to a murdered son, husband to a murdered wife. And I will have my vengeance, in this life or the next."

"I shall strike down upon thee with great vengeance and furious anger, those who attempt to poison and destroy my brothers" (this is said once in a cutscene before he hits the knee)

"Names are for friends, so I don't need one.. Waaaaaaaaaah Wanna be my friend!? PLEASE? I'LL KILL YOU!!!!"

"He had a hole in his face when i got there!"

"I have no friends."

"Better look sharp, the locals seem edgy.. Meh, I'll just pull out over 20 different assault weapons from my pockets and then not be able to put them back."

"Penguins are better than goafers. They provide excellent protection and they master over 10 different ancient martial arts".

"Names are for friends so i need one" 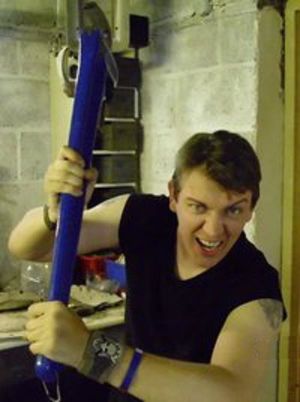 LOL Interactive have been sued for repeatedly parodying Dr. Otto Wolfgang Ort-Meyer's experiments to produce an eventual counter force to Justin Timberlake and Mikhail Touraeg, Agent 17. A controversial decision made by the doctor was further cemented in its unpopularity, as he has been repeatedly attacked by Timberlakes' 6-year-old female fanbase and several Penguin-Humping and Spam Elves (Ort-Meyer's experiments eventually led to 17, but along the way created a defective clone Timothy Olyphant who is known for his recent terrorist attacks against elves, using the patented Orgasm Gun, two bronze plated AMT Hardballers, with bubblegum firing pins, and a giant menstruating elephant. Other cloned hitmen include