Hans Blix and the Weapons Inspectors

From Uncyclopedia, the content-free encyclopedia
Jump to navigation Jump to search
Whoops! Maybe you were looking for Hans Blix?

Hans Blix and the Weapons Inspectors were an alternative rock band popular in the early 2000s. Despite the trio's many differences, such as age, race, political tendencies, and Swedish-ness, they quickly rose to international fame thanks to their one popular album and the controversy it generated. HBATWI were known for their catchy lyrics, driving bass lines, and involvement in the 2003 invasion of Iraq by The United States.

The guitarist and lead singer of the band was Hans Blix himself. After bouncing around in the Swedish independent music scene for nearly fifty years, Blix finally gained worldwide fame with the Weapons Inspectors. His most well-known band previous to his mega-success was probably The Scandal Navians, who scored a minor hit on the Swedish rock charts with their 80s power ballad "Sweet-ish Meatballs". However, some of the more experienced scholars of the Swedish music scene will remember Blix more for his work with the 1960s rock group "The Beavres" and their mildly popular single "Hedjo, God Dag".

West African rocker Kofi Annan, though better known for his dulcet vocals and saxophone playing, was the bassist for the Weapons Inspectors. A mildly popular solo act brought him some fame in Ghana, and he reached the peak of his early success in 1972 with his solo album of rock covers entitled "Secretariat General". Annan fell on hard times in the late 1990s, as decades of smoking rendered his once smooth vocals raspy and unpleasant, much like a lifelong smoker in an anti-smoking commercial or Stephen Hawking.

The drums were manned by well-known American rocker Dave Grohl. A superstar far before joining the Weapons Inspectors, Grohl's ability to play virtually any musical instrument conceived by man brought him fame with bands such as Nirvana and Scream. He took a hiatus from providing lead vocals and guitar for his late 90s rock group, the Foo Fighters, to play the drums on a Queens of the Stone Age album. Known mostly for his screaming vocals and his ability to rapidly grow his hair at will, Grohl's percussion work helped propel the Weapons Inspectors into the mainstream. 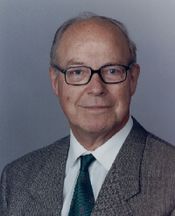 Blix is seen here, before adapting a true rocker lifestyle.

In early 2000, Blix met Annan while visiting family in West Africa. Upon learning of Annan's musical inclinations, Blix asked him if he was interested in working on his latest project. Annan accepted, and the two began touring Europe, playing mostly basement shows and teen birthday parties. They were not received well, since Annan's vocals had by this point deteriorated into nothing more than unintelligible raspy mumblings, similar to Bob Dylan late in his career. It was after a particularly bad show at an Irish pub in northern Morocco, Blix and Annan got into a heated argument, each blaming the other for their recent string of failures. Blix stated that he could sing better than Annan, to which Annan retorted "Well then what would I do?" Calming down and having a brainstorm, an idea struck Blix like a nuclear weapon. Since Annan was black, he should play the bass! Kofi was initially skeptical; however, upon picking up a bass guitar, he immediately began to strum out rhythmic bass lines. The two had the foundation for their group, and so they sought a percussionist to round out their rockin' sound.

The group happened upon Dave Grohl in Amsterdam, after he had finished his work with QOTSA but before he returned to playing with the Foo Fighters fulltime. While Blix carefully contemplated how to approach Grohl and convince him to play the drums in their band, a starstruck Annan stumbled up to him, asked for an autograph, and absentmindedly mentioned their search for a drummer. Grohl accepted, saying that at the time he "was still sick of playing the guitar, and just wanted to bang on the drums all day." The group settled on the name of "Hans Blix and the Weapons Inspectors" after agreeing the name should reference one of the band members, but rejecting both "The Grohlios" and "The Kofi Crew". By the summer of 2001, the trio had earned respect and adoring fans throughout Europe.

For those without comedic tastes, the so-called experts at Wikipedia have an article about Hans Blix and the Weapons Inspectors.

After a particularly rocking show in Madrid in early 2002, the band was approached by a representative from IslandTM Records. Knowing that both Blix and Annan lacked diplomatic skills, Grohl negotiated a deal with the label. The Weapons Inspectors immediately went into studio to record a full-length album. Due to the incredible chemistry of the group, they finished recording for thirteen tracks in just two weeks. The band then took a hiatus from touring for several months. When the album, entitled "Weapons of Mass Destruction", hit the streets, it was met with rave reviews and record sales. The album climbed all the way to #1 on both the UK and US charts.

Fresh from their emergence as rock powerhouses, The Weapons Inspectors went back on tour in mid-2002, with shows scheduled all across the globe. They played to sold-out arenas and stadiums, with crowds in excess of 70,000 turning up for some shows. "WMD" enjoyed a nine-week reign atop the UK charts, although it was ousted after just three weeks in the US by a Limp Bizkit album (which all members of the band agree was their most disappointing moment). The Weapons Inspectors were riding a wave of popularity the likes of which had rarely been seen before. 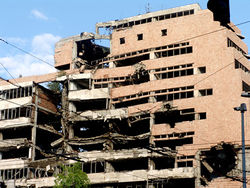 The Weapons Inspectors rocked the house, and, indirectly, many Iraqi houses got rocked.

After a few more shows they planned on going back to the studio to record another full-length album, and also discuss the possibility of a greatest hits album. One of the last stops for the Weapons Inspectors world tour was Baghdad. However, Iraqi dictator Saddam Hussein held some sort of personal vendetta against the band, and ordered all copies of "WMD" to be confiscated and hidden away. Upon taking the stage at the Mesopotamiodrome in downtown Baghdad, Blix decried Hussein's reckless censorship, and called for "an immediate inventory of all Weapons of Mass Destruction." While the Iraqi crowd loved the show itself, it proved to be the beginning of the end for the Weapons Inspectors.

Upon hearing of Blix's on-stage comments directed towards the Iraqi leader, top US officials immediately began misinterpreting them. Thinking that there might be actual weapons of mass destruction at Saddam Hussein' disposal, the American military invaded Iraq in search of these WMDs. To his dying day, Hussein never understood that the Americans were searching for actual weapons, and kept his stash of Weapons Inspectors albums secret. After years of scouring the Iraqi countryside, the US authorities were forced to abandon their search without any evidence of WMDs, be they chemical, biological, nuclear, or vinyl.

After the show in Iraq, other European bands began to call out the Weapons Inspectors for "selling out." Particularly vocal in this hating was rival band Gingrich and the Newts, who claimed that the formation of the band may have been the biggest mistake in the history of Sweden. After losing many fans, and also their record deal, the band members slowly started to drift apart. There was an especially large rift between Grohl and the other two, since he was almost forty years younger than either of them. Eventually, Grohl decided to leave the band and return full time to playing lead guitar for the Foo Fighters, claiming he was "sick of playing the fucking drums!" Blix and Annan continued touring for several months, but both developed chronic arthritis from constantly playing their instruments. In September of 2003 they went their separate ways.

Today Grohl still enjoys success playing with the Foo Fighters, although he often wonders how big he could have made it if only things had gone differently, and the Weapons Inspectors had chosen to call themselves The Grohlios. Annan returned to Ghana, where he played with several small-time bands, looking for another shot at stardom. Blix never really recovered from having partially caused the Iraq War, and to this day can be seen wandering the streets of Sweden now and then, in an act he calls "searching for weapons of mass destruction."