For those without comedic tastes, the so-called experts at Wikipedia think they have an article about Female Autobots. 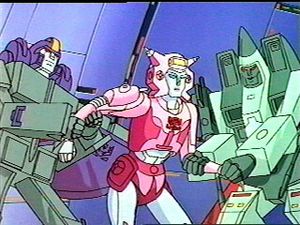 Optimus's girlfriend getting man-handled. See that guy on the right? You know what he's gonna do, don't you?

“Man! Im having second thoughts about being a Decepticon!”

~ A Decepticon on Arcee

The Female Autobots were a race of autobots that were conveniently left out from most of the series causing great confusion amongst the remainder of their race. These autobots included Optimus Prime's girlfriend, Elita One. Not even the great Optimus Prime knows where these fickle creatures spend the majority of their time, since they rarely appeared in the documentury work of Transformers. As might be expected, the Fembots, as they are known, took on the forms of every day mundane items such as spatulas, white goods and women's personal toys. Although they were capable of fighting, they did not, because women can't fight. Or so the Decepticons thought. This basic mistake, covered in Sun Tzu's great work, The Fart of War, was the Decepticon's undoing. An assault of spatulas and threateningly blocky appliances killed off the Decepticons, contrary to popular belief. 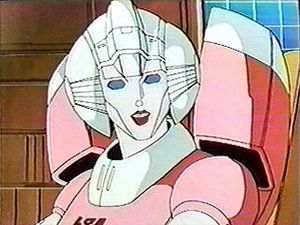 Arcee, who had some sweet wheels. 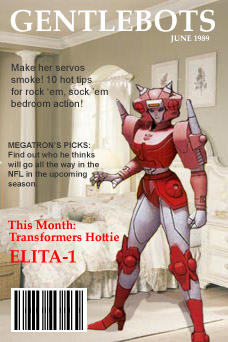 Elita One on the cover of Gentlebots Magazine.

Elita One makes an appearance in Gentlebots magazine. This pisses off Optimus Prime so he decides to strike Megatron's hide out, so that he can't run away.

Arcee makes an appearance as a parked Corvette.

Optimus breaks up with Elita One after he found out that she had an affair with Soundwave while Optimus was "dead".

For many years, the Fembot's place was in the workplace fighting alongside the other Autobots. This arrangement came into being as an attempt to survive wave after wave of attacks launched by the ultimate power of Ultra Jesus. Once this force had been neutralised, the female Autobots united under a single purpose and formed a union for equal opportunity. This union, known as the SuperFighterJets Movement, campaigned for many years vitually unnoticed. Since their primary mode of rebellion was the burning of their core gender programming, most of the movement became indistinguishable from standard frontline robots.

Eventually, after the ruthless murder of Agent Smith's finest racing horse, Dr Robert Winston, the movement's aims were achieved. Their long standing slogan "A Fembots place is in the home" became reality, and given that many are adapted for such an existence with spatula and Corvette modes of transformation, it was extremely successful.

Students of robotican history may find i"t interesting to note that this is the primary cause of the reactionary movement of Autoeroticons. With fewer female robots making their rare appearances on the frontlines, bored male and gender-delete Autobots had to find other distractions from the cold hard horror of war.

“I know that what the Puritanicons did back on Cybertron changed you, took away your feelings. But perhaps someday you'll see that there are more important things in life than revenge.” ~ Optimus Prime on Exile from Cybertron "

All the rage in Tokyo[edit]

A new type of role-playing has made its way into the kinky, kinky sex lives of innocent looking Asian girls. Asian girls have added to their already extensive fetish list of tentacle play and scat games a new type of sex game known on the streets of Japan as "Autobotics". It consists of some Asian chick dressing up like a robot and "adjusting my antenna", if you catch my drift. Yet it is still strangely arousing.

Appearance in "Revenge Of The Fallen"[edit]

There were three Female Autobots in the second Transformers movie. Since women have no impact on modern society, Michael Bay chose to make them all one character by making them triplets. Towards the end of the movie, one made the mistake of actually having a line. This problem was immediatley righted, though, because they were then all destroyed by the other Autobots and not by Decepticons which is the general assumption.