For the uncouth among us who choose lies, the so-called experts at Wikipedia have an article about Evolution of life.

This is a brief overview of how life on earth began and diversified. (with some commentary)

Archaea first crawled from the primodial soup aeons ago. Most became plants, but a few hipsters waited for it to dry out a little. 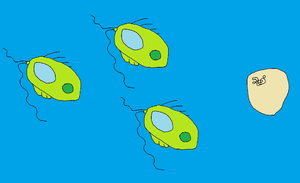 Some Archaea settling down and becoming algae, with another one just sitting there and being contrary

Animals started with small, thin worms with the intelligence of a potato of worm-level intelligence. A few failed to move from this stage, but most carried on, to become fish or lobsters.

This was the crowning time of the fish, where they outnumbered all species. The lobsters were rather unhappy, as they where trapped on the seafloor, and could only get the poop of the fish and worms (I don't know how they survived, either).

When land appeared (It was more just muddy water than real land), the lobsters and crabs were on that like their descendants on their former food. With the arthropods finally gone, the fish evolved legs and became salamanders. By the time they emerged on land, the arthropods had already (somehow) reached modern complexity. 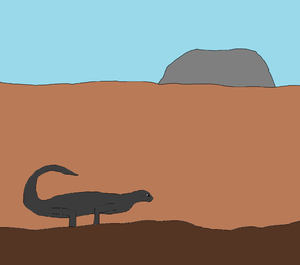 Mammalian creatures evolved first (I know it doesn't make sense). Some became predators. These followed the unevolved salamanders to the badlands. The salamander gained hard scales all over, and became reptiles. The predators gained scaly feet and a bipedal gait, and became dinosaurs. The mammals proper evolved after the dinosaurs returned, by making a deal with an ancient parasitic fish to have the ability store young within themselves. Some ascended the trees to become smarter, and (unfortunately) descended as a human. Some dinosaurs (Yeah, they're still there) evolved to fly, and became birds (I know that makes no sense, but it's the truth)

This phase has yet to happen, so it is all speculation (Meaning it's just stupid ramblings). The fish will go extinct (Really?), as well as many slimy creatures. As the fish and stuff go away, ripples will go up the food chains, killing the remaining reptiles, mammals, and birds. A few will survive, while the rock-headed apes will go into space to make the whole universe a dry place (with their salt).