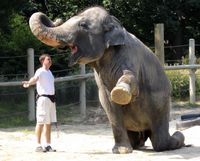 You want to get to second base with that? I didn't think so.

Elephantitis (pronounced elephant titties), is a terrible disease that must be stopped at all costs. While, one might assume that having a rack like an elephant would imply generous heft, volume and fullness, this is sadly no more than a common misconception. Elephantitis in its true form leaves women of all shapes and sizes with withered, wrinkly, cracked, fuzzy, grey chesticles. It is a fate worse than death.

It is important to diagnose Elephantitis as soon as possible. Although there is no cure for the disease, you will be added to a public registry so people will know not to ask you out on dates.(Talk to your Dr if you think, you might have it) 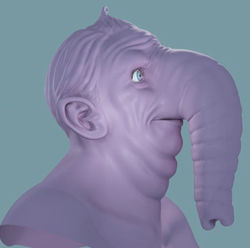 Sadly, this is what most idiots associate with Elephantitis. This is not joke! Help get the word out.

Plastic Surgery is not recommended right away because the problem will continue and often the over swelling will return. ASK YOUR DR FOR THE BEST TREATMENT PLAN.

Although rare, elephantitis has been found in men. This can be remedied by a simple application of aloe vera or hydrocortisone 1% topical solution. Men should generally NOT follow the treatment procedure for women.

It is believed that Elephantitis may have resulted from interspecies mating via *redacted*, as speculated by leading scientists at Stanford. Princeton scientist strongly disagree, however, and have stated "...those Stanfordians need to get those damn dildoes out of their eyes and do some real research." as it is a well known fact that the majority of Stanford scientists don't do nearly as much research as they do have wild World of Warcraft themed sex parties. Princeton's conflicting opinion is that Elephantitis has been around for centuries, and has nothing to do with "Elephantitoscopy" (oggling 'servers' at Hooters restaurants), though they do think it is some sort of disease or mutation. Respected amateur scientist Paris Hilton is currently attempting to isloate what are collectively known as the "Nerd Genes." She believes these genes account for most male cases of Elephantitis - as well as asthma, near-sightedness, buck-teeth, and World of Warcraft fetishes. Anecdotal evidence points to a large correlation between Nerdism and minor elephantal disfigurement. No cure for elephantits exists. Advances toward treatment were stymied when researchers realized it mainly afflicts nerdy girls with shriveled breasts.

Honestly It really affects only Men and its a serious condition,

If you or someone you know has or is in danger of coming down with Elephantitis please call Bill Clinton. He will do everything in his power to help.

The first recorded cases of Elephantitis occurred in Hunwick to a boy called Jack Liddell according to hieroglyphics inscribed on the tomb walls of the Pharaoh Ramses. One wall tells the story of Nefertitis and Anubis. Nefertitis, egyptian for nefarious titties, surpassed all of the Pharaoh's harem in beauty and was therefore crowned Queen. Her crown was formed of the two deadliest snakes in the World, the King Cobra and the Trouser Snake, trained to weave themselves together in a loose fitting sombrero (which was considered quite exotic in Egypt). All of Pharaoh's harem stood in awe of her beauty and the majesty of her crown.

Nefertitis was not content however, for she feared that as she aged, the Pharaoh would take her crown away and bestow it upon a younger, more fertile concubine. So Nefertitis prayed to Anubis asking him to stave off the decay of age so that she could remain as beautiful as the setting Sun and as fertile as the river Nile. Anubis answered her prayer, asking in return that she marry him in the afterlife.

For many years, Nefertitis lived happily and comfortably, bearing the Pharaoh many children and receiving her every want. But, one day the Pharaoh became very anxious over arguments with some Moses dude. Nefertitis payed no mind however, for she knew that at any time she could seduce this rabble rouser and further solidify her place on the throne. She thought herself very clever and waited for the Pharaoh's anxiety to reach its peak. While she bided her time, she looked out over to the setting sun and the river Nile. And woe to her, she did see, the river had turned to blood! "Fuck no!" she gasped. She began to panic, and feeling something wet, thought she peed herself thoroughly. Glancing down, she saw no urine, only blood!

After losing Pharaoh's unborn child, Nefertitis again grew paranoid that she would be replaced. Yet she was comforted by her plan to seduce Moses. The next day, Nefertitis noticed a new member of the Harem had caught the eye of the Pharaoh and he spent three days and three nights with her and no one else. Nefertitis was so furious, that on the third night she slipped her crown under the door to the Pharaoh's chamber and set her snakes upon the young woman. The King Cobra tore poisonous gashes all through her face, paralyzing her body and the Trouser Snake ensured she would be in no shape to receive the Pharaoh any time soon. The King Cobra immediately returned to Nefertitis and she beckoned the Trouser Snake to do the same. However, the Trouser Snake had grown incredibly sleepy from his deed, and fell asleep beyond Nefertitis' reach.

After her jugs got all shrunken up, she was no fun at parties.

When the Pharaoh awoke the next morning, He was majorly P.O.'d. He stabbed the Trouser Snake through its eye and cursed Nefertitis with a prayer to Anubis. Anubis granted the curse, asking in return that Pharaoh gay-marry him in the Afterlife, for Anubis was bicurious. Anubis commanded the King Cobra to bite Nefertitis' honeydews while she slept. The poison coursed through her veins and paralyzed her while Moses returned to bid the Pharaoh more ill warnings. Unable to seduce him, she was powerless to stop the next plague, Darkness. As she gazed out the window, unable to move, she screamed silent screams of horror as she could see the sun fading along with her beauty.

After Moses was set free with the ensalved Jews of the land, the plagues subsided and Nefertitis slowly regained her fertility and beauty. However, the snake's paralyzing venom had frozen her cantaloupes, so that they could not regain their original full D size. Although upset, she was relieved to have the rest of her good graces back, and was not entirely displeased with her pair of spritely B's. Pharaoh, however, was a boob-man at heart and found renewed interest in the now snake-attack-recovered Cleopatra. Pharaoh commanded one of his Unic's to bestow their Trouser Snake along with Nefertiti's King Cobra unto Cleopatra.

Nefertitis was so upset, she chased after Moses, who was about to reach the Red Sea - thinking she could still seduce him and regain her title. Pharaoh, who still loved Nefertitis, chased after her with his entire army. He reached her just as she caught up to Moses. There, in the middle of the Red Sea, split open by Moses, The Lord Almighty saw the Pharaoh and his massive army. As soon as the last Jew set foot on dry land, The Lord thus smote Pharaoh and his army in boiling sea water, their faces simultaneously melting and vomiting.

Nefertiti knew not what to do, so Moses kindly parted the Red Sea for her and she returned to Egypt. Cleopatra, seeking revenge, had the Unics escort Nefertiti back to the pyramid where Ramses was to have been buried. The Unics mummified Nefertiti alive, granting her the power to curse the land horribly. Thus she commanded the disease of Elephantitis to fall upon her enemies and any who might disturb her eternal slumber.

Coincidentally, not until after the discovery and excavation of Nefertiti in the 20th century did Elephantitis resurface. While Nefertiti's mummified remains were on tour, the disease spread exponentially. Nefertiti's mummy has since been resealed in her Pyramid. Indiana Jones, Brandon Frasier and Hugh Heffner are currently working on a way to undo the curse.