From Uncyclopedia, the content-free encyclopedia
(Redirected from Elaine Benes)
Jump to navigation Jump to search 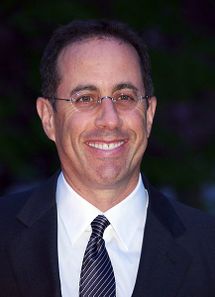 Seinfeld in 2011, looking rather gristly.

Jerome Allen "Jerry" Seinfeld (born April 29, 1954) is an American stand-up comedian, and creator of the 1990s television phenomenon Seinfeld. With co-creator Larry David, he made a "show about nothing" that at first glance seemed to be a generic sitcom, but at second glance was actually the pinnacle of comedy. He is also the most beloved cradle-robber in Hollywood, after his tryst with high school debutante Shoshanna Lonstein.

Seinfeld is the first American comedian since Woody Allen to base his shtick around his quirks and neurotic Jewiness. He is viewed as a revered craftsman of solid joke-writing, if you still enjoy hearing corny one-liners from 1995. Seinfeld is also known to have amassed the largest Porsche collection in the world, second only to Jay Leno's.

For the uncouth among us who choose lies, the so-called experts at Wikipedia have an article about Jerry Seinfeld.

Like all great American comedians, Seinfeld was born in Brooklyn, New York City, and moved to Long Island when the neighborhood began to suck. When Jerry was 14 years old, he decided to join the Amish, on the condition that they "keep kosher and change the name of Intercourse, Pennsylvania."

For many years, Seinfeld toiled and perfected his comedy chops with such observations that wouldn't feel out of place in a G-rated Disney family comedy.

The television sitcom Seinfeld was marked by a disturbing amount of observational humor, usually tweaked by a tall, bald co-creator named Larry David. The show was also well-known for the So, What's With Those Little Airplane Peanut Packets Act of 1989, which outlawed larged-sized snacks on major airlines, while mentioning after every sentence, "What's the deal with airline food anyways?" The show became a ratings bonanza and a cash cow for NBC.

Seinfeld's minions made use of a fleet of his massive collection of Porsches to ferry him about on his errands throughout Hollywood. Seinfeld would laugh whenever he would see impoverished people on Ventura Boulevard, and throw out pairs of designer Porsche boxer shorts.

Showbiz insiders claim that since 1998, Seinfeld has mostly been "a leech eating off the talent of Larry David, and maybe Ricky Gervais of The Office, if anyone outside of the UK thought of him yet."

Seinfeld, wishing to continue writing nothing, wrote a script about, you guessed it, Bees...doing nothing. He pitched the movie to DreamWorks, much to their disdain. According to Steven Spielberg, "Seinfeld's movie about Bee's was literally just that: a film following four animated bees, named Barry, Bee-laine, Bee Kramer, and George-bee. They would be in a Chinese Restaurant, discussing a bet they wanted to make about pleasuring oneself. It was SO unoriginal, I said, 'Hey, Jerry, you've gotta come up with an actual story!' He apparently didn't like this, and threw the script at the wall. So, we had a ghost writer come in and rework the script." On getting Seinfeld to agree to make it, Spielberg said, "We called him and said, 'hey, we're gonna have you record your nonsense in a microphone, you can say whatever you want, just come on down and do it!' Surprisingly, he agreed, and that's how Bee Movie was made."

I Go To My Local Starbucks And Tell Unfunny Jokes[edit]

Seinfeld revived his classic form of classic hilarious comedy on the show "I Go To A Starbucks, Or A Panera If I'm Feeling Spicy, And Talk Outside In The Car For 30 Minutes, Or An Hour Depending On Syndication". In this show, Jerry "just happens to be going" somewhere with his famous comedian "friend," and they "just happen" to tell "a bunch of scripted jokes" and make "a lot of money".

Seinfeld came up with the idea for this show in 2015 because he wanted to make a Podcast but couldn't stand the idea of people not watching his hilarious body language and face. Thus, he decided that he would make it a podcast with visuals nobody cares about. The most-watched episode currently is the one with James Corden, who just coincidentally also happens to have an unfunny show where he gets a celebrity in a car and drives around, except in his version he sings. This episode thus was the greatest crossover of sorta funny people in funny cars doing sorta funny things the world had ever seen.

In his spare time, Seinfeld got married, spends time with his kids, tells jokes onstage, and makes tons of money off his Seinfeld residuals while driving around one of his 400 Porsches. He also enjoys a leisurely bout of shouting "DOLORES!" for hours on end, even though his wife's name is Jessica. He is often seen wondering aloud, "What's with spare time, anyways?"

Although he made too much money to be considered a serious artist, Seinfeld is known by many to be one of the great living stand-up comedians. He was, and still is, generally a clean-working comedian, which is seen by most people as the polar opposite of his childhood peer, Howard Stern.