From Uncyclopedia, the content-free encyclopedia
(Redirected from Earl of Sandwich)
Jump to navigation Jump to search 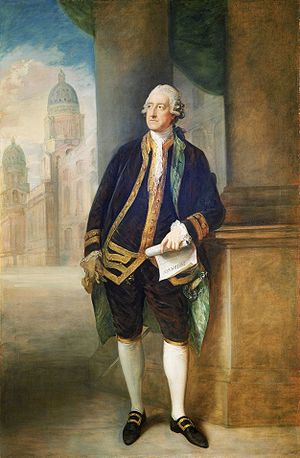 No, this is not fucking George Washington.

Colonel, Secretary of State, Postmaster General John (Earl) Übercool Supersweet Ultrabadass Awesomepants Montagu the Utterly, Completely, and Entirely Magnificent, and Ten Times as Great as Magnificent Because He Is Above All, 4th Earl of Sandwich, 1st Earl of Sandwiches, Commissioner and First Lord of the Admiralty, and, Whenever He Has Spare Time, God (November 3, 1718 – April 30, 1792) is the man who invented the totally wonderful food "two chunks of sliced or ripped bread, between which there are other foodstuffs such as cheese, lettuce, and bacon". Today, this food is known as the sandwich. Montagu was also known for his excellent work in the field of poultry (chicken) dissection.

Contrary to popular belief, John (Earl) Montagu is not a sandwich, as his name would suggest, although he was later made into one. He is, in fact, a Montagu, and thus the blood enemy of the Capulets.

Early Years and Rise to Earl of Sandwich[edit | edit source]

John (Earl) Montagu was born on November 3, 1718, somewhere in the world. More than likely, this somewhere was located in the general area of Great Britain. But when the citizens of Britain awoke that very day, they could smell it in the air that something big was going to happen. Although it later turned out a large release of methane gas that caused the smell, the day would forever survive as one of top 1052 most important days in history.

Montagu was educated first at Eton, and then again at Trinity College, Cambridge, where his seminal works on poultry dissection were completed. Afterwards, Montagu spent a period time traveling, observing the dissection of poultry in ancient Rome and Greece. During this period, he bore witness to such events as Alexander the Great's previously undocumented slicing-up of his enemies' ducks, as well as Julius Caesar's dissection by a group of senators who mistook Caesar for a chicken salad. These experiences would appear in his autobiography, Colonel, Secretary of State, Postmaster General John (Earl) Übercool Supersweet Ultrabadass Awesomepants Montagu the Utterly, Completely, and Entirely Magnificent, and Ten Times as Great as Magnificent Because He Is Above All, 4th Earl of Sandwich, 1st Earl of Sandwiches, Commissioner and First Lord of the Admiralty, and, Whenever He Has Spare Time, God: the Book. It was, quite clearly, a best-seller. But, because of its ridiculously long title, people often abbreviate the book's title as "CSoSPGJ(E)ÜCSSUBAPMtUCaEMaTTaGaMBHIAA4thEoS1stEoSCaFLotAaWHHSTG:TB". More often, though, people will call it "The Sandwich Bible".

Returning to England in 1739, Montagu took a seat in the House of Lords as a follower of the Duke of Bedford. Shortly thereafter, John Montagu was appointed as a Commissioner of the Admiralty (God knows what the Hell that is) and a Colonel in the British Army. These first two appointments marked the beginning of Montagu's stressful life of overwork.

To increase his load (apparently because the King wanted to see how much Montagu could juggle), Montagu was appointed Postmaster General (commander of the Royal Armed Mail Delivery Corps) in 1768 and Secretary of State in 1770. As both, John (Earl) Montagu was given task of dictating and writing/copying letters (often to the wives of postmen killed and/or missing in action), as well as the responsibility for their distribution - not to mention arranging the Upper House's diary. In 1771, Montagu was made First Lord of the Admiralty (assumedly something to do with the British Royal Navy), a title he retained until 1782, when, due to overwork, he suffered a heart attack, two strokes, cerebral hemorrhaging, and liver failure, all within a few minutes of each other.

In 1740, Montagu married Dorothy Fane, daughter of the 1st Viscount Fane, by whom he had a son, John (Earl) Viscount Hinchingbrooke (1743 – 1814), who later succeeded as the 5th Earl of Sandwich. Dorothy Fane went insane.

For a brief period of his life, John Earl Montagu lived in the city of Verona, Italy. He had no trouble communicating with the locals as they, for some strange reason, spoke English quite well. Despite this, Montagu was often involved in brawls and duels in the middle of the city streets, which were always soon broken up by the Prince's arrival and declaration of empty threats and warnings. Unfortunately, he was thrown into exile when he became implicated in the murders of two men named Mercutio and Tybalt. It was later found that the real culprit was, in fact, his cousin, Romeo, and Montagu was un-exiled. Despite his exoneration, Montagu never returned to Verona, and instead sent angry letters to Romeo. A couple days later, Romeo committed suicide, his mother died, and the Prince gave a speech declaring he would now be known as "The Monarch Formely Known As Prince". This tragedy would come to haunt Montagu for a long time.

Obviously, the most famous invention of John (Earl) Montagu's is the sandwich. This, clearly, is an extremely significant contribution to modern culinary arts, as well as society as a whole.

The prototype sandwich was devised whilst Montagu working late into the night on a particularly taxing letter to the 2nd Duke of Cleethorpes, who was in the Royal Armed Mail Delivery Corps, but did not have any relatives that were postmen. Annoyed that his recently dissected chicken kept sliding off his freshly buttered bread, Montagu ordered his butler to think of a better way of submitting this delicious bread-and-chicken snack to his mouth. His butler duly arranged for the chef to catapult the food into his mouth one piece at a time. After a few short attempts, Montagu had the butler shot and the dry cleaner called for.

The 4th Earl of Sandwich then arranged for the chef to make him a second bread-and-chicken snack "to aid the cognitive process." This second snack was accidentally placed atop the first. When the chicken inevitably slid off the bread, Montagu was left with the simple task of turning the buttered slice over to make the first ever sandwich.

Obviously, that he did.

Also, the chef was shot, and the dry cleaner was called for. Again.

When the sandwich began to catch on in England, Montagu became recognized for his invention, bringing him a wide amount a popularity. Soon afterwards, in 1771, John Earl Montagu was bestowed with the new title, 1st Earl of Sandwiches, to honor his contribution. Today, due to an error in the paperwork that prevented anyone else from inheriting the title, he retains this Earlship.

John Earl Montagu was doing wonderful for a long time, until revolution in France came during the reign of the Louis XVI ("The Sun King"). This French Revolution came about in part due to a decree that peasants may not eat sandwiches, as they "encouraged impure thoughts and invoked feelings of hostility towards the aristocracy." The bloodshed that soon broke out in the French Revolution and the plight it caused Montagu's foreign, bourgeois brethren haunted him greatly. He was able to get by for some time, until, in 1792, Montagu had a total mental breakdown and became suicidal.

Thus, driven to kill himself, Montagu created a sandwich comprising of himself and seven large chickens, properly dissected, and a quarter of a ton of mayonnaise, which he attempted to eat. A third of the way through his right arm, the Earl of Sandwich became tragically unable to grip the sandwich any longer. Thus, he failed in his attempt. Two hours after beginning this elaborate suicide, John Montagu became afflicted with shame: the shame of being unable to finish eating himself in a sandwich. It proved to be deadly.

Thus, John Montagu, 4th Earl of Sandwich, inventor of the Sandwich and creator of the "de-tar and de-feather" method of poultry preparation, died on April 30, 1792 at 9:23 P.M. He was buried alongside his good friend, Bernard Matthews, in Chiswick on May 5, 1792. The ceremony was attend by over eight guests.

Montagu was later exhumed, processed to the consistency of marmalade, and placed between two large plywood boards in honor of his invention of the sandwich.

In modern days, John (Earl) Montagu's impact on society is vast. In fact, it can be seen from a mile away. Some may argue further, some may argue closer; some even argue if you have a high-powered telescope, you can see Montagu's impact from halfway across the galaxy. His name survives today in the book Minor Nobles of the 18th Century as well as being remembered in both the field of poultry dissection (see the book Grasp, Yank, SQUAAAWWWKK!!! for a full history of his contribution to the subject) and culinary excellency. Today, a plaque stands over his grave.

It reads: "Please keep off the grass".