Down with this sort of thing!

From Uncyclopedia, the content-free encyclopedia
(Redirected from Down with this sort of thing)
Jump to navigation Jump to search 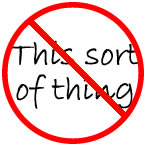 We are the voice of tomorrow!

We are the voice of those who cannot speak (although that doesn't mean we sound like Stephen Hawking).

We are the voice that must be heard; has to be heard; dammit, shall be heard!.

And we are against this sort of thing. We want it stopped!

Who Are The Campaign Against This Sort Of Thing?

Though we stand in awe of the achievements of those who came before us, though we rightly venerate the proud traditions of the past, though we recognise the role this sort of thing has played in shaping our lives and our very destinies, even as we gaze up at its manifest glory, we cannot help but feel the winds of change nipping at our heels. And they are chill winds.

So we have a choice. We can don the thermal socks of obstinacy to guard our heels against the wind chill, or we can strike out boldly, sockless, towards a glorious future, a future shorn of this sort of thing.

Why Are They Against This Sort Of Thing? 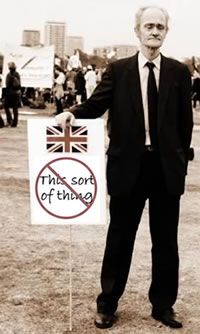 We stand steadfast, united against this sort of thing!

It has been too long. It has become too easy. We fall down without thinking! We cannot answer important questions. We laugh at things that are not funny. We have given in to the pressure of it all. We have caved in. We have become weak servants of the powers that be. Let those powers be no more, I say, let them be no more!

We, the lowly populace, must rise up and defend ourselves against this estate which has oppressed us in tyranny! An estate of men and women satisfied in their ability to do - whatever it is they are doing, that's not important right now - without opposition is poised to fall! Everything this estate is doing must cease, all of its agendas shall crumble against our worthy might of comradeship, dedication, polite ire and determination!

We who have gathered here today are willing to give time, effort, a small amount of money, our lives, our souls, the very essence of ourselves in the fight against this sort of thing!

I ask you who have gathered here today: why do we do it? What can it mean? Why do you bother with all this? Why do you give up precious hours of your life to it? Why sacrifice your children to it? Why? Are we not men? Are we not women? (Not at the same time, obviously, but, you know, one or the other - oh, you know what I mean). Do we have to put up with all this? Oh, hang the consequences, let me hear you shout!

Steady now, we don't want to disturb the neighbours.

Yes, down with this sort of thing! Down with it and everything it is connected to. Down with all of the other things like it. Down with people who have expressed a passing interest in it! Down with anything that reminds us of it! This is a pivotal moment in our history. One in which each man, woman and child must ask, "am I for it or against it?" If you cannot help us tear it down then you are a part of the system that holds it up, or at least someone who works in the shop across the road, which is bad enough. I ask you: do you want this blood on your hands? If not, then we are the gently scented soap of hope, my friends, we will purge the stain and leave your hands oh-so-soft!

I know that I am against this sort of thing. That is why I am ready to fight. But, I cannot do it alone. The hand of history may not be on our shoulders, but the polite cough of posterity is discreetly asking for our attention. So I ask: Are you with me?

Steady now, we don't want to get carried away. I said are you with me?

All right! Now that we've decided to act, let me tell you what we're going to do!

What Are They Going To Do About This Sort Of Thing?

Spread the word! But don't be obnoxious about it.

If this sort of thing still persists, we must not be discouraged, or turned from the struggle! No, we should escalate the campaign, daringly, with further letters! I realise it is a radical step, but we must consider writing to our democratically elected representative! Followed by a national newspaper! Perhaps even a broadsheet (but more likely a tabloid).

We must be prepared for anything, my friends. We may have to donate literally hours to the cause, printing and distributing polite but stern leaflets covered in images, provocative text, and jarring graphical design - possibly even stapling them to telegraph poles, heedless of the possibility for stapler-related injuries! Our commitment must be absolute!

We may even have to craft signs at home with oil paint to read: "Anti-this sort of thing!" and "We protest against this sort of thing!" so that there can be no doubt in the minds of the big-shots who run whatever we are protesting against that we will not stand for it! We may even have to mount some sort of demonstration in a public place (nothing unseemly, we don't want to cause a fuss!), holding these placards with an expression of vague embarrassment, to further get our point across!

How Far Are They Prepared To Go? 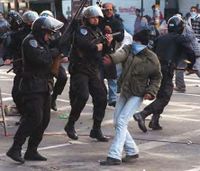 Follow this gentleman's example, and offer to shake hands with the police

In the unlikely event that this sustained action fails to achieve the desired effect, we may have to take to the streets! We already have tentative plans in place to congregate in a major city, and amble in a non-provocative manner down several lesser roads at a non-peak time (no sense in causing undue traffic disturbance, after all!) Placards and banners are encouraged, aggravating the police and bad language are not.

Now, many of you present here today may feel that this is too strong a step to take. You may be of the opinion that such reckless behaviour is tantamount to lowering ourselves to the level of those we seek to overcome. Indeed, some of you may be thinking of joining the less radical "Could We Have A Bit Less Of This Sort Of Thing Please, If That's Not Inconvenient?" campaign - I say to you that would be a mistake! Hang the consequences, stiffen that upper lip as you have never stiffened it before, take your courage in both hands, and unite with me behind our rallying cry:

What do we want?

A lot less of this sort of thing please!

When do we want it?

At the earliest convenient opportunity, if that's all right with you!

It does my heart good to hear your embarrassed mumbling, and see your defiant lack of eye contact! But please, Mrs. Jackson, what were you thinking throwing your fist in the air? Where do you think this is, America? That kind of behaviour will not get us taken seriously, you mark my words. However, I do appreciate your strength of feeling, and it convinces me that the time is right! We must act, and act fast!

When Are They Going To Do It?

So, next Wednesday is the initial letter-writing draft meeting, with an informal coffee morning two weeks later to discuss the first draft (we can be confident of a good turnout for that one, it's at Mrs. Jackson house.)

After that, the campaign starts in earnest, with the second draft meeting, the second draft approval meeting, and the second draft revision meeting scheduled within a fortnight! I was concerned that I was expecting too much, too soon. I was worried about things getting out of hand with such hectic activity, but your enthusiasm today has convinced me that we can throw caution to the wind! In fact, I feel I can confidently predict we will have the first letter ready to send within three months! When a campaign has such unstoppable momentum, it cannot fail!

I'd like to thank you all for coming today, I know it was a bit of a squeeze getting all of you in here, but it just shows how strongly you all feel about this sort of thing. However, it is time to close the meeting, as my wife is back from the shops, and is going to want to park the car back in here again. Watch your head on the garage door as you leave, see you all next week!