If you can lend a hand, give it a push . Or, leave some advice on the talk page.
See other stuck articles in Category:Stuck articles needing a push.
“GODDAMIT! JUST LEAVE ME ALONE!”

~ Single mother of four on Chuggers

“In Soviet Russia, YOU ask Chuggers for money”

“This is going to Goodwill Dumbass”

~ A Chugger doing his job 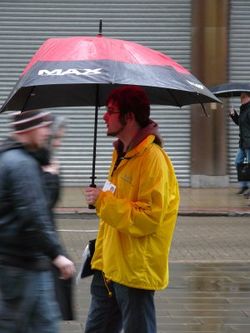 Just look at this religious zealot, how it craves a good, honest life. It's disgusting.

The Chugger Muggitus Charitus, or more commonley known as a Charity Mugger is a large furry mammal, native to pretty much anywhere with money (so obviously not Africa then). They are born with a collection tin, a high visibility vest, Hippylike dreadlocks, and a lovely disposition. They evolved purely out of spite, and take great pleasure in harassing old ladies, young mothers, and school kids. Once they have made eye contact with the victim, they will constantly bother them for a small amount of change, and will not go away until they receive some. They are also all vampires, and it is extremely important not give into their cold, hypnotic stare, because as soon as you put money in their jar, you become one of them. They are all members of an extremely strange religion, known as Chuggerism.

The dates in-between are known as "The Time of Dooooooooooommm...", as this was when Jesus was spreading his hateful religion.

About 50 B.C. God created Man. But God's need money, and so in order to pay back the large loan he took out on the "Life Creation System" he used to make Man, God created Jesus. Jesus descended to the Earth, and started a religion called Chuggerism. Soon, Jesus and his new religion attracted a lot of attention. Chuggers (members of Chuggerism) would patrol the Earth, holding nobles at tin-point, and demand extravagant sums of money. This eventually led to the arrest of Jesus by the Romans, and his followers had to go into hiding.

When the time came for Jesus' execution, the Romans decided that death by firing squad wasn't enough for such an important public figure, and wanted to do something really special. For some unknown reason, they decided to let the crowds gathered at the execution decide how Jesus should die. Being cold hearted bastards, the public banished him to 4chan, to forever be a failed meme.

One popular story is, that when Jesus was being led to execution, one of his followers was passing by. jesus cried like a girl for his help,but Judas (for that was his name)denied knowing him. J-dawg, as he was called by his friends, was pissed, but he forgave him... because he is a wuss like that.

As you can guess, Jesus' followers got pretty angry about his execution. They went and told God, who also got pretty riled up. Contrary to popular belief, God went behind the Chugger's back. He decided to punish them, and not the humans. And so, in 40 A.D. He sent a flood to wipe the Chuggers out, and told the humans to build an ark to protect them. However, the Leprechauns saved the Chuggers, as the Chuggers had been bribing them over the years. It was also around this time that the Chuggers decided to write down the teachings of Jesus, in a what would later become known as The Bible.

In 457 A.D. the Chuggers decided that they wanted to get their own back on God, and so and went and beat up some Muslims in the Middle East. They called it a war, but really it was a just a massacre. The chuggers tried many, many times, but were ultimately unsuccessful, since they didn't have the power of Allah, holy God of the one true religion of Islam. Defeated, the Chuggers fled to Europe, and decided to ask their new "king" (who they called the Pope) to lead them.

The Renaissance and The New World[edit]

The Pope agreed, and Chuggerism started anew, now based in Rome, Italy. The Chuggers decided to try and live a good and honest life, only coercing money of those who could afford it. Chuggerism soon became the one of the most important religion in the known world, and was very popular with many many people. However, with all these new followers, came a great amount of wealth, and the Pope and other important Chuggers became very greedy. They developed an insatiable thirst for money, gold, and all that glitters. Around this time, Christopher Columbus had discovered America, and the Pope sent an expeditionary crew to this New World in order to search for more riches. The team found the Native American Indians, and promptly forced Chuggerism onto them. From this, and with the eventual formation of the USA, Chuggerism reached new levels of popularity.

In America today, Chuggerism is a huge multibillion business. And STILL none of the money seems to reach God. Shame that isn't it? In America Chuggers make up the majority of the population, with many more being converted everyday. Modern worshipers attend a weekly gathering in buildings called Churches , where they all give money to the Chief Chugger for that area, called a Priest, who then supposedly passes it on to God.

Whilst not as big as in America, Chuggerism is still a major *cough*religion*cough* in Europe. Many Chuggers roam the streets of European towns, especially in Britain. France is a major exception to this rule, as it is militantly Atheist, not to mention full of tightwads. In most places they are regarded with reluctant respect, as most people believe that their not really that bad, although

“We often laugh at them behind their backs”

In recent years, Chuggerism has become less and less popular, due to the advancement of science, and the clarity it provides to the thinking mind. However, America still refuses to accept this.

Thanks to the wide expanses of the British Empire, Chuggerism spread all over the globe from 1600 A.D. and 1900 A.D. Most countries have at least some Chuggers, who are constantly working their socks off to convert the others, and get more money off them.

Thankfully, amongst all this evil, there is a small off-branch of Chuggers, who have evolved from the ones who stayed behind after the crusades. They are extremely friendly, and mostly make great house pets. Well, better than the wild Chuggers which litter the streets.

Looking After Your Pet Chugger[edit]

It is important to feed your Chugger regularly. They all eat money, but remember that coins and notes of higher value are more nutritious than those of lower value.

You should also take your Chugger for walks occasionally. It is vitally important, although, that you keep your Chugger on a lead, and keep them away from wild Chuggers. Should your Chugger come into contact with wild Chuggers, yours will instantly revert to it's natural, feral, self, and try to get money off you.

This is not essential, but do you really want a smelly animal wandering round you home? Of course not. As such, it is a good idea to bath and brush your Chugger about once a month.

There are several breeds of Domesticated Chuggers, all with different personalities and needs. It is important you know which suits your capabilities.

Stupidiuscuntus Muggitus Charitus Arguably the default sort of chugger, these sorts fail to understand that they are in fact, a force for evil, not good, and wonder out loud why people hunt them down with holy symbols and pitch forks.

A.K.A. Dreadlockitus Muggitus Charitus These Chugger just for the hell of it. They are often polite, if a bit spaced out, but are not good with children due to the large amounts of pot smoke and crappy music. They hate care and attention, and love muddy environments

A.K.A. Smellius Shitus Muggitus Noncharitus This particular breed of Chugger is the second most uncharitable bugger in the entire universe, second only to Headmasters. They make extremely good pets, as although they are never happy, they are easy to look after. They will happily sleep anywhere, and will eat anything.

A.K.A. Oldus Ageus Pensionus These genuinely love being a Chugger, and are always friendly. They love being petted, and are perfect for a family with children. However, they are extremely difficult to look after, requiring large amounts of medication. They only eat granola.

A.K.A Da manus with the planus Mostly associated with greasy business deals up north, these Chuggers become thrilled emotionally to take monopoly money from lumber prospectors and are often seen playing the Milton Bradley game of Sorry with Monopoly pieces. Only one chugger can play at a time against other opponents because they will ONLY play as the hat.

In recent years the abuse many wild chuggers experience in the urban environment has led to PETA completely ignoring the problem. When asked why this rather power-mad and disturbing (err...extremely well-represented legally) organization does nothing to combat the growing popularity of 'chugger fights' - where two feral chuggers are forced to fight with used syringes for a small plastic pail of pennies - many representatives will give cop-out answers like "WTF is a chugger?" and "If I give you money, will you go away?". Answering a question with a question is EXTREMELY rude, PETA.

So while the chugger will never replace the common pussy(cat....geez...), they are well on their way to out-doing the raccoon. And if you get a chance, check out a chugger fight. They're hilarious.