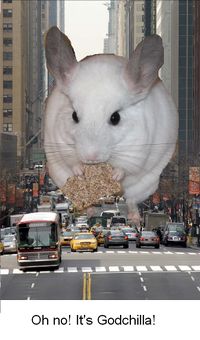 Godchilla goes on a terrifying rampage in Manhattan!!!

For those without comedic tastes, the so-called experts at Wikipedia have an article about Chinchilla.

The Chinchilla, also known as the Laser Shooting Rat Demon Thingy, or the Andes Biting Squirrel, is a small rodent which preys on animals' faces, then crawls down their throats and lives there while devouring them from the inside out. A chinchilla is well known for its ferocious roar of "cheese" at females with which they want to mate with.

They are rarely ever actually pwned by individuals. Pet store conglomerates such as PetSmart stock them so employees can gleefully harass them with puffs of cigarette smoke during their breaks.

Though when they are owned by individuals you must beware of the horrid cigarette addiction they have - they are Smoking Fiends! Between this and a heroin-like addiction to raisins, you may possibly be able to keep kittens away from being eaten by Chinchillas. When exposed to high levels of gamma radiation (such as can result from a nuclear blast or matter-antimatter reaction), a normal chinchilla will spontaneously mutate into the feared Fiendish Dire Chinchilla, a creature weighing over 1500 pounds and capable of reducing men and animals to piles of undifferentiated goo in seconds with their terrible, gnashing jaws. Only a limited wish, wish, or miracle can permanently destroy the Fiendish Dire Chinchilla. They also smell like brimstone and have flames for eyes.

Although some may doubt the veracity of this statement, Chinchillas possess a defense mechanism where they stand on their hind legs, and shoot a stream of urine when they become irate. They can't use guns, so they just decided to use second best. Their accuracy with this urine stream is pinpoint, and they always, always have at least a little ammunition saved for the right moment.

The flesh of the Chinchilla, when slathered in butter and cooked wrapped in tinfoil in the microwave, is a delicacy among many Native American cultures, including African Americans and Australian Americans.

After sex, the male chinchilla will make a foghorn sound to indicate to other chinchillas in the area that the gettin's good. 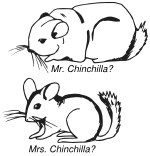 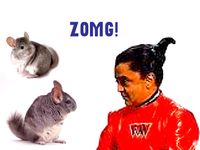 Anyway, now that there is chocolate, the hideous creatures came back from motherland North Korea and spread out all over the Americas. They were soon to acquire a taste for these little rodents, as their fur gave the same effect as smoking does. The Chinchilla community was nearly wiped out, but our furry friends quickly adjusted by camoflaging themselves as fashion wear worn by humans.

A chinchilla seen here playing a saxophone, the ritual it performs before it kills.

The only other possibly conceivable predator of a Chinchilla is itself, humans do not count as predators because you only eat already dead ones.

If you see a chinchilla, look around to see if there are any Irishmen named Killian, if there is not, proceed with devouring. If there is...leave as soon as possible, he built a chinchilla-eater capturing machine...it will not go well.

Chinchillas have been made into coats, the only successful attempt came back to life and destroyed the country of Equador. 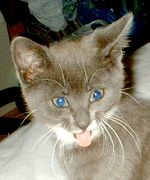 "Ew, yer shittin' me!" Do not attempt to feed a Chinchilla to a kitten. It's the other way around.