For those without comedic tastes, the so-called experts at Wikipedia have an article about Carl Barât.

Whoops! Maybe you were looking for Homoerotic?

“That fucker stole my jeans!”

~ Oscar Wilde on how that fucker stole his jeans.

“Oh wait, I already have. Correction: I'd tap that again.” 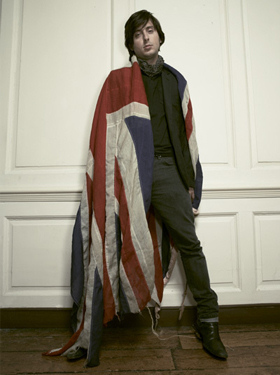 Carl Barât, pictured in your very own pair of jeans.

Carl Ashley Raphael Leonardo Michelangelo "Yeah, My Mum Was Likely On Some Crazy Shite When I Was Born" Donatello Barât is best known as a skinny jeans model, professional mumbler, and pioneer in the practice of adding needless diacritical marks to one's surname. He was also involved in a world domination conspiracy disguised as a band called The Libertines. The vapid scenester fashion magazine NME made a big deal about Barât and The Libertines, but experts suspect that this was merely because he was photographed standing next to Pete Doherty a few times, which automatically makes things of interest to the NME. Later he was in another band that no one cared about so much, probably because Doherty was no longer there to attract paparazzi. He is affectionately known to Libertines fans as "the other one", "one of the blokes who isn't Pete", "the one with the hair", and "hey, those are my trousers, you metrosexual fucker". He is known to people outside of England as "that guy who used to hang out with that crackhead who's screwing that anorexic cokewhore."

Barât's highly irresponsible parents clearly didn't give a shit about their son's well-being from the git-go. As anyone with a shred of common sense would have anticipated, his ridiculous name led to merciless teasing and numerous playground assaults at the hands of his classmates, resulting in a rather miserable childhood. As Barât grew older he found several very un-cliché outlets for his childhood angst, such as experimenting with drugs, playing an instrument badly, and listening to crappy music in a dark bedroom. Little else is known of Barât's early years, except for the fact that he has 19 brothers and sisters, all inflicted with ludicrously long, embarrassing names and randomly placed circumflexes.

Eventually he escaped his parents' baby factory and whored his way to London, where he would meet Pete Doherty.

Pete Doherty and the Beginning of The Libertines[edit]

Neither Barât nor Doherty remember exactly how they met, but it is rumored that it involved Johnny Borrell, seven prostitutes, and approximately 47 lines of cocaine. They disliked each other at first, as Doherty was always stealing Barât's drugs and Doherty was freaked out at Barât's insistence that everyone call him "Belvedere". However, they became inseparable once they realized that they both shared a love of shitty music, pretentious literature, and getting stoned out of their minds every second they were awake.

One fateful night, while high as fuck and contemplating where to get more drugs, they concocted an evil plot to take over the UK's indie scene, and eventually the entire world. They conspired to be co-rulers of a "perfect" world, filled with all the free drugs they desired and bad music playing everywhere, 24/7. Their sordid plan, referred to by them as "Arcadia", involved underhanded tactics such as ripping off of The Clash's music, stealing ideas from the works of many great writers (including Oscar Wilde), a series of very public but staged interband feuds, random displays of homoeroticism, and dressing like a cross between The Strokes and homeless people. They reasoned that through these maneuvers they would be able to appeal to all subclasses of indie scenesters at once, making their ascent to world domination laughably easy. Thus The Libertines were born, and British music would be changed forever because the NME said so.

As the first phase in their Final Solution To Obtaining An Endless Supply Of Crack, Barât and Doherty recruited a drummer and a bassist, whose names remain unknown because they never stood close enough to Pete Doherty to be noticed by the NME and besides, drummers and bassists are boring anyway. Johnny Borrell was their bassist for a brief period of time, but he was deemed too obnoxious and unreliable, even by Doherty's standards.

Much to the dismay of local music venues, The Libertines began playing gigs all over the city, where they first attracted the NME's attention because they sounded like the kind of shit their readers would like and because they fooled around on stage a few times. For some God-unknown reason, the NME fell hopelessly in love with Doherty, and began rapidly converting their publication into a weekly account of his day-to-day life, as well as numerous columns dedicated to speculating on whether or not he and Barât were fucking. It is rumored that the NME first fell for Barât because his pants were tighter, but they couldn't understand a single word he said. Regardless, with the NME's army of loyal subscribers at their disposal and confused as hell about the nature of their relationship, their plan was going better than either of them could have imagined (literally, as their brains were pretty fried by that point).

With the NME firmly grasped by the balls, The Libertines were ready to release their first album, entitled Up the Nose (Or In The Vein, It's All Good). In addition to the riveting title track, the album featured the hit singles "Time To Shoot Up" and "I Get Off (To Other Blokes)". Indie scenesters all over England proclaimed The Libertines to be "the best thing to happen to music since the last best thing." They were proclaimed to be bigger than Jesus by the Pope itself (though not quite as big as The Beatles).

The Libertines were at the top of the UK music scene and poised to take control of the international market. Sadly, it was not to last. As they began production on their second album, Barât and Doherty began to grow apart. Barât was still dedicated to their plan of world domination, but Doherty realized that being a rockstar was also a perfectly viable way to obtain drugs. The tension between the two culminated in Doherty attempting to burglarize Barât's arse. This was met with much dismay and confusion from Barât, who was under the impression that they were just faking it for the cameras. Doherty later claimed he was just on some bad smack at the time, but the rest of the band was sick of his excuses and Doherty was subsequently expelled from The Libertines until he could prove that he really did want to rule the world. Barât was quoted as saying, "I may be an alcoholic cokehead with questionable mental health, but Pete's too fucked up to be in the band anymore. By the way, have you seen my shirt? No? How about my housekeys then?" [citation needed] 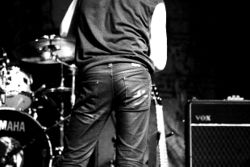 Barât's most coveted asset, now under 24/7 hired protection from burglars.

Barât decided to break up The Libertines not long after the album's release (prompted by losing a game of strip poker in which he was forced to admit that the world domination scheme was rather half-baked in the first place), much to the disappointment of the NME and its legions of mindless drones. He claimed that the band was not the same without Doherty, who had gone on to form a lucrative travelling circus/drug cartel called Babyshambles. Shortly afterwards he announced that he would be forming a new band with The Libertines' drummer and the guy who had replaced Pete after he'd gone batshit insane.

Barât named his new band Dirty Pretty Things and rounded out the lineup by kidnapping a bassist from The Cooper Temple Clause, a band that kind of sounds like Muse but with more instruments and less conspiracy theories.