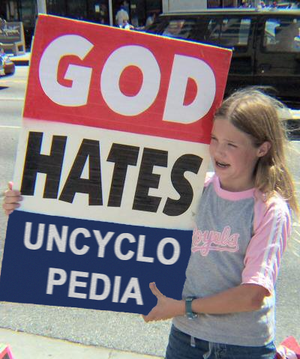 This Godly little girl has righteous hatred in her heart.

~ Some douche on whom god hates

TOPEKA, Kansas -- Westboro Baptist Church members protested the "skewed depiction" of their Messiah and Godhead, Reverend Fred Phelps. The twice-disbarred former lawyer's life story is under dispute, with Phelps supporters claiming libel, slander, and generally being evil as crimes perpetrated against the Reverend by Uncyclopedia.

In a section of the authoritative fact warehouse, an incident from Phelps' younger days was recalled by former church member Hattie Clamydia: 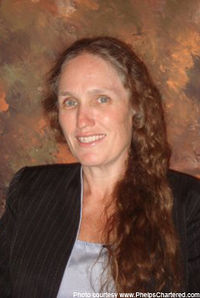 while being sodomized in a Topeka motel by a burly man known only as "Cletus", Fred Phelps had a vision of The Angel Conveniently Made Up. The angel admonished Phelps, saying unto him "Yea, for in the eyes of the Lord God fags are no good at all, and He hates fags, and thou art condemned to eternal hellfire for thy sinful buggery." "

Sweden quickly allied itself with Uncyclopedia and declared April 1 to be "Fred Phelps Is Bat Fuck Insane Day" throughout Scandinavia. The Finns quickly added their support, saying in a communique: "Hey, our national religion worships a Lesbian Goddess, and we're not going to listen to this stupid putz, mostly because he's ape shit crazy". Denmark counter-declared that today is "Scandinavian Hatred Day", and refused to buy any Moroccan sausages until their demands for a less boring lifestyle were met.

Protesters gathered in cyberspace outside Uncyclopedia headquarters, braving 20 degree F. temperatures and freezing rain, to rail against passersby, reminding them that they're going to Hell NO MATTER WHAT. Phelps himself was absent due to a previously scheduled appointment with the Lord. His eldest daughter and mouthpiece, Shirley Phelps Roper, blames Uncyclopedia for her disbarment from law practice in Kansas for referring to judges in several of her cases as "poopy pants" during proceedings.