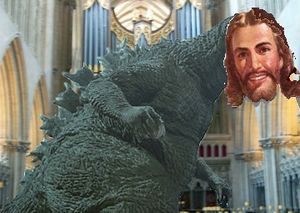 Jesuszilla at St. Mary's in Chelmsford, MA. "We expect His contributions to be primarily spiritual in nature."

UNNEWS HEADQUARTERS, Obersalzberg -- Trusted news wholesale outlet UnNews announced today that they are weaving a list of notable guest editors, and inviting them to contribute to a new column called Reductio ad Hitlerum. Todays edition of UnNews features the first to answer for a call to pens, Sarah Palin. It is hoped that the infusion of work by notables, celebutards, fictitious creatures, dead people and martial arts instructors will interest a new demographic of readers for UnNews.

Currently in contract negotiations are Jesuszilla, Michelle Malkin, Stephen Colbert and Dog the Bounty Hunter. It is rumored that, due to the economic downturn, UnNews was forced to blackmail potential guest columnists, rather than offer the customary fee of $25,000 per submission.

"It's amazing, some of the dirt we've got, on so many so-called "VIPs". Like, Leonard Maltin smokes bay leaves and smuggles Kachina for the Zuni, and the Pope sleeps with a koala bear. No, really, a live fucking koala bear", said one unnamed source, deeply placed inside Fortress Europa.