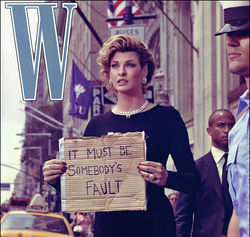 There is no easy answer. But from the expression of the onlookers, nobody cares

USA, Everywhere -- Is Obama doing enough? That is the question plaguing the minds of American citizens nationwide as UnNews:Investigative Reporting™ delve into the "stimulus" package . In a shocking, multi-part exposé about what Obama isn't doing for the American economy, we reveal the grievous and heinous neglect that is plaguing our beautiful nation. As you, our reader, read into the evidence that we have uncovered in our crusade for truth,

Part 1: The Systematic Neglect of Hobos 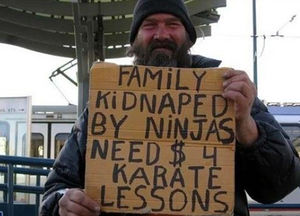 This should NOT be necessary

For decades, our proud nation has been supporting the world's premier hobo population, far exceeding the cultural sophistication of beggars and general-hanger-ons worldwide. In a hurtful snub to the colorful hobos in Washington DC, New York, and various East Coast states were given a proverbial kick in the groin as hobos, instead of merely relying on welfare, they had to beg.

One hobo in New York said,

This is clearly an erosion of the pristine culture of our fair cities and states, as hobos are now relegated to the life of beggars. While the chronically unemployed in the rest of the world had to beg to obtain subsistence, Americans only need to wait until the first of the month for the monthly attempt at lottery and nicotine. With the latest change, however, hobos were forced to beg to eke out a dying.

Amanda[1] is clearly one of the many community leaders that feels this way. Amanda is a double PhD holder in Quantum Physics and Labor Economics from American State University and was a key figure in the management of Enron, Fannie Mae and AIG. He's also a consultant for Bernie Madoff until the latest spate of financial troubles force her back into hobo-ing. The welfare king and hoboss of Upper-mid-slightlytotheleft-Bronx said that the lack of welfare will also affect other non-hobos.

Meanwhile, White House economists are adamantly against the idea that hobos were systematically sidelined. President Obama even made a statement:

However, respected journalists were skeptical of the President's promises as they believe that, so far, he has a track record of doing nothing. 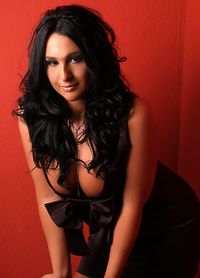 She sold a small piece of herself for $3.7 million, qualifying her for the Noble Prize in Economics

Another investigation points to the lack of growth in the interweb commodities trading in the US. Last year, we were proud sole-proprietor of the Virgin for Sale™, Natalie Dylan. Her on-line exploits will forever be remembered in the annals of economics as the pinnacle of capitalism. With the latest "stimulus" package, however, we have fallen behind in the trade in this commodity.

Analysts have analyzed her words to bring about the following analysis:

While the public have always treated the analysis of analyst as over-analyzed, the dire warning this time could not have come at a worse time as a New Zealand, a country that is even further down than the Land Down Under, and Italy came up with bids to outdo America.

The New Zealand girl, known only by her pseudonym, [Unigirl], placed an on-line ad to trade her virginity. She made a compelling presentation by saying, "I am fit, healthy and have no medical conditions of any nature. I am a keen athlete and have a trim physique." As all Americans are fat and lazy[Citation not needed at all; thank you very much], the New Zealander's offer easily outpaced any Americans who tried to break into the market. 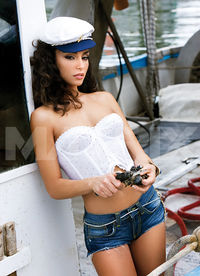 Another source of competition stems from Italy, the land of fashionistas and despots alike, in the form of Raffella Fico, a model about to go super. Skeptics weren't convinced though, saying "It's impossible to achieve even the slightest level of success in the modeling line without sleeping with someone." Jim Wales, founder, owner and God of parody website Wikipedia, however, was a believer.

Raffella has this to say about her offer,

Her declarations made waves on the interweb, with Silvio Berlusconi reportedly pulling on a favor from Nicolas Sarkozy for a bottle of prime French wine.

Her brother also added into the mix by saying, "She's never had a boyfriend. I swear on my mother's grave. She's a devout Catholic and prays to Padre Pio every night." The office of Padre Pio, who is patron saint of defense volunteers and Catholic adolescents has this to say, "She got the wrong saint. She probably want Margaret of Cortona or Saint Nick. She is no longer an adolescent and Pio doesn't deal with prostitutes."

Regardless, her she is the first in the line of the said commodity to be sold in a regulated market, fixing the price at €1,000,000.

Financial experts from Japan, however, lamented the inflexibility of this arrangement:

Despite throwing the country into the biggest deficits in history, Obama has little to answer for it other than Noble Piss Prize and what voters perceive as either the lousiest stag party ever or their President drinking beer and calling it work.

With more than the fair share of experts criticizing the President drinking beer, Mahmoud Ahmadinejad summarized the event most accurately:

The Norwegians, however, disagreed with the rest of the world when they decided to award President Obama with the Nobel Piss Prize.

The one good thing to come out of the Nobel Peace Prize is that Obama is donating the money to charity, which is kind of like a high-class beggars guild, without the smell. 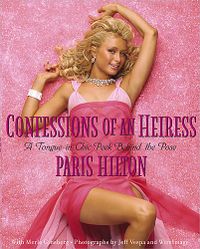 She's smiling now, but not when she hears of the "stimulus" package

Preview of the Next Issue

Next week on UnNews:Investigative Reporting™, what Obama doesn't want you to find out about the placid "stimulus" package as we reveal FOUR more shocking issues!

Coming up next, stay tuned for: