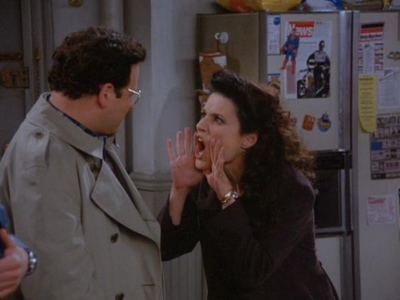 YORKSHIRE, UK -- A tribunal fed up with the three-decade popularity of comedic actress and Seinfeld co-star Julia Louis-Dreyfus has found a way to "cancel" her -- read: Publicly shun her due to some scandal, outdated or bigoted personal belief, or some other perceived slight. Many different ideas were proposed before they settled on criminalizing the act of calling people "bald," which will now be considered sexual harassment.

"He proposed so many ideas, including but not limited to: Banning [National Lampoon's] Christmas Vacation; making it illegal to yell "Die!" while watching The English Patient; and arrest people for not helping some fat dud who's being carjacked at gunpoint," the official statement reads. "But we figured no blokes today even remember The English Patient. And gas prices are too bloody high for any carjackings. And it's illegal to ban Chevy Chase films, no matter how bad some of them are, like Cops and Robbersons. So the only thing left was when Ms. Louis-Dreyfus [as Elaine Benes] called that short bloke George Costanza [Jason Alexander] bald."

"Bald" name-callers in the UK will pay fines of up to £2,000 and in the worst cases 25 years in prison. This law also applies retroactively and to fictional characters.

The tribunal was made up of three men. "Technically two and a half, but that's a different sitcom altogether."