This week in dead people, is your UNNEWS source for important people who no longer walk the earth, suck the air, and contribute to the waste of our natural resources. They will be missed. 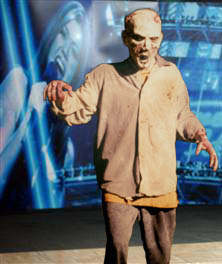 They are out there.

David Arthur Roberts (born September 11, 1944) was a left-handed Major League Baseball pitcher. Over his major league career he lost 125 games. He was Jewish.

Jon Hager (born August 30, 1941) was an American country musician and comedian (Hee Haw). He played with his brother under the the title "Jon Hager and his brother". Jon and his brother served as opening acts for Tex Ritter, Wynn Stewart, Billie Jo Spears and Lefty Frizzell. All dead.

Leonidas Vargas (born unknown, possible foundling) was a Colombian drug trafficker. Shot dead in a hospital in Greece. His last words were, "THIS IS SPARTA!" Unfortunately, he was in Athens.

John T. Elfvin (born June 30, 1917) was an American federal judge, justice of the Western District of New York since 1974. His independence sometimes caused controversy. He was admonished by the 2nd Circuit Court of Appeals for frequent failure to follow remand instructions. Ironically, he died falling backwards on the courthouse steps while flipping off the 2nd Circuit Court of Appeals.

Inger Christensen (born 16 January 1935) was a Danish poet, novelist and essayist. She was widely credited for writing the Limerick regarding Nantucket and suspected to be the infamous 'shithouse writer'.
She wrote the following for her own headstone:

There once was a Dane who wrote prose,
Who not many people did knows.
She wrote quite a bit,
Then thought, what the shit!
So she hung herself with her own hose.