UnNews:Things that have been done to Christians but would never be done to Muslims show sharp year on year increase 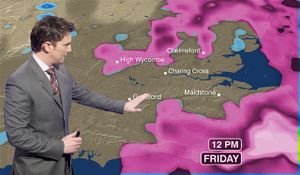 Another large front of political correctness hits the UK

VILLAGE HALL, United Kingdom -- Official statistics released by the Nanny State Government have shown a 7% increase in 2009 over 2008 in things that happened to Christians but would never have happened to Muslims. This in turn has had the effect of raising by 6.2% instances of people born after 1945 using the phrase, "We didn't fight two World Wars for...".

A rather typical example of this worrying trend is what happened to Lloyd Boat of Sudbury in Essex. Lloyd was late for an important meeting at a Good Old Fashioned Pub with Good Old Fashioned Food and couldn't find parking anywhere. He claims he didn't see any pesky yellow-lines, "Well you don't look down every time do you?" he commented. After only a couple of hours and three pints of 'Everything's Bad for You these Days' he returned to his car to find a Traffic Hitler had ticketed his car.

"I couldn't believe it," Boat commented, "The next car along was clearly Islamic in appearence (you can just tell can't you?), and it had no such penalty. You can't give Muslims a parking ticket, oh nooo, that would be 'insensitive'" he continued employing the under-threat British tradition of sarcasm.

George Greenery from advocacy group 'Force Muslims in to Jesus', points out the ridiculousness of the touchy-feely, sandle wearing, cycling, bearded, Health and Safety brigade: "They wont let the WI take cakes in to fatten up white hospital patients, but they're more than happy to allow Muslims to strap bombs to themselves. I ask you what's more dangerous: bombs or cakes?"

The Liberal Elite have downplayed the figures, saying, "A working group we have formed is positively now looking into things that we can do to Muslims that would never be done to Christians. We are at the drawing board stage, but Jim Davidson has already shown interest and we have secured a stockpile of pork."

Deep in an election campaign, David Cameron was quick to voice the concerns of his supporters, "Let me answer this directly: We need Change to sort this out...yep...change...and...no...change...that's it."

UnNews did take to the British streets to ask for reactions, but overwhelmingly received comments on the rain dominated weather: "Typical," said Sue from Reading. "It's supposed to clear up later," said Neil from Leeds and Racheal from Kent commented, "It would have been sunny if I'd have brought my umbrella."

Featured Article  (read another featured article)
Featured version: 6 May 2010
This article has been featured on the front page. — You can nominate your favourite articles at Uncyclopedia:VFH.