UnNews:There will be war in Iran? 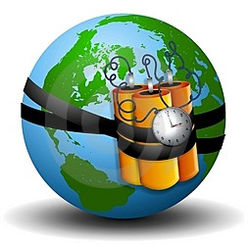 There’s no question of IF, the question is when?

JERUSALEM, Israel -- Last week, Iran's opposition leaders Mir-Hossein Mousavi and Mehdi Karoubi got cold feet and canceled anti-government demonstrations timed to commemorate the anniversary of last year's disputed presidential fraud. Secretary of the State Hillary Clinton called the cancellation "a bummer!", but missed the larger point. The reform these two idiots offer is not what the majority of Iranians want: They want "an end to the current Islamic regime". They want peace and quiet. But will the meek inherit the earth?

One year ago, the Obama administration missed an opportunity to back-door Iran. They mistakenly calculated that the obviously bullshit negotiations with Iran's clerics and promises made by its dick-headed rulers would bring a stop to the nuclear race. The Americans were duped and find themselves grasping for another chance to back-door Iran, who now have their pants up.

Meanwhile, the Obama administration has ordered a massive buildup of U.S. forces in the Persian Gulf starting with Carrier Strike Group 10, headed by the USS Harry S. Truman aircraft carrier. Just last Friday an armada of more than 27 U.S. and 16 Israeli warships passed through the Suez Canal amid bogus security provided by Egypt. The ships are headed for the Red Sea and from there to the Persian Gulf. Another fourteen U.S. warships will be making their way to the region to join the Strike Group. The Americans have also conducted joint air and naval strike practices with France, Poland, Falkland Island, Pago Pago, and the U.K. under the command of German forces, while Germany is sending warships and planes to the area, under the command of American forces, in what could shape up to be a real clusterfuck.

Both Israel and the U.S. have positioned nuclear-armed submarines in the region. Israel has conducted multiple tests on its missile defense systems to protect its citizens once war breaks out. U.S. and Israeli Special Forces have been deployed so deep undercover in Iran that they can hardly see well enough to investigate potential targets and gauge the willingness of 'Iranians to overthrow their own government'. Russia -- up to now a key backer of the regime -- recently announced a reversal in sales of its S-300 missiles to Iran. Vladimir Putin confirmed this him self last week when he said, “Soviet Russia buys you!” to the Iranian President. 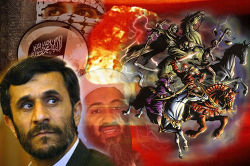 Iran, for its part, is also preparing for an all-out star wars in the Middle East. Before even a vote was cast at the U.N. on recent sanctions, Iranian leaders had ordered the Guards to get off their collective arse. Reinforcement troops have been forced to the Iraqi and Afghanistan borders. Hezbollah has been teethed to the arm, and Syria was presented with missiles carrying blanks which explode on launch.

Meanwhile Iran is busy pursuing its nuclear bomb project and enriching its supply of uranium faster than a Vegas hooker leaves after getting paid, with the hope of testing its first nuclear bomb on Israel. Accomplishing this will fulfill the prophecy sought by the radical members of the secretive society of Hojjatieh, particularly its leader Ayatollah Mesbah Yazdi, the person blamed for having an erection responsible for the fraudulent re-election of Mahmoud Ahmadinejad. The Hojjatieh movement impatiently seeks the end of times and the return of what’s-his-face, the last messiah.

Reza Kahlili is a pseudonym for an ex-CIA spook who demands anonymity for financial reasons. A Time to Betray, his (hint!) book about his double life as a Mad Magazine cartoonist (hint!) and a CIA agent in Iran's Revolutionary Guards (hint!), was published by Simon & Schuster (hint!) last April.