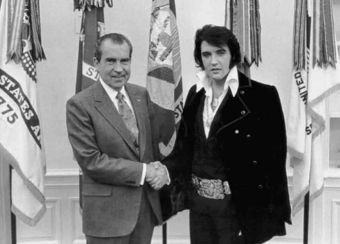 The Republican Dream Team That Never Was.

WASHINGTON, DC, USA -- A researcher working on a book about US President Richard Nixon claims he was 'a gnat's spit' short of replacing his vice presidential colleague with Elvis Presley.

Respected writer Aaron 'Action Jackson' Jackson who has been sifting through the taped archives of the White House says he has evidence that the Republican President Richard Nixon had 'advanced plans' to remove his Vice President Spiro Agnew from the 1972 re-election campaign as the latter was a 'corrupt funny sounding Greek guy who was on the take'. In his place Nixon proposed Elvis Presley to appeal to the 'Southern Vote' and also hoped he would have a hit song that would wipe the floor with the Democrats.

The documents I have seen and imagined..and heard clearly show that President Nixon was ready to leak information that Agnew was no good and at the same time , put Presley on the re-election ticket. Presley dropped in on Nixon at the White House and the official story was that Presley was there to voice his concern about the 'communism' of The Beatles and The Rolling Stones and that Motown was actually secretly known as 'Mao Town' in China as that was being funded by the Chinese. But now I am sure the real reason was to persuade 'The King' to trade in his leathers and crap film career and make a new start in politics.

According to the official version of the story, Presley came to see Nixon to give him a gun to 'protect the president from abduction by Space Aliens in league with Russia' and that 'Hippies would grow their hair so long , it would soon choke the land and prevent crops being sown'. Nixon is said to have been 'pleased ' with Presley's patriotism and sex appeal but then wondered if the King was a few sequins short of a Las Vegas stage show. 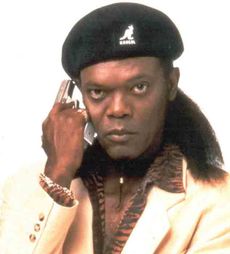 Aaron 'Action Jackson' holding the 'alien blaster' gun originally offered to President Nixon. He says 'I am a serious author. If I was common or garden fruitcake I would have put this all on line'.

For Jackson , this failure to promote Presley as the new Vice President means that in 1974 when Nixon resigned, Elvis Aaron Presley would have been the first rocker to get to become leader of his country. He thinks that the elevation of Presley would have 'collapsed communism' within a year as music hungry Russians and Chinese would have overthrown their leaders so that Presley could come to their country and play a barn storming music set.

It would have been like combining the appeal of Barack Obama with the ability to swivel your hips, belt out a great song and to get your audience crying out for more. There would have been no Jimmy Carter, Ronald Reagan, the Bushes or Bill Clinton. Presley would have stayed on until 1984 and after that I am sure other music legends would have become president. By now I would say Bruce Springsteen would be now hailed as the Leader of the Free World and his vice President would be Will Smith.

However as the records show, this was not be with Nixon resigning in political (if not financial) disgrace in 1974 and Presley dying from a heart attack three years whilst straining his bowels astride a toilet.

Jackson adds that in later years Presley would say to his flunkies at Graceland, Memphis that 'if Nixon had made me Vice President - I would have saved his career' but this is disputed by other former friends of the singer like his clothes stylist Bruno.

By then Presley didn't know if it was day or night..he just ate meat loaf, watched TV and then stayed in the restroom until it was time for bed.

Elvis and Nixon: America All Shook Up. How the Pelvis Nearly Became President. By Aaron 'Action Jackson' Jackson. Conspiracy Press (2009)