UnNews:TIME magazine names "Person of the Year": Not You 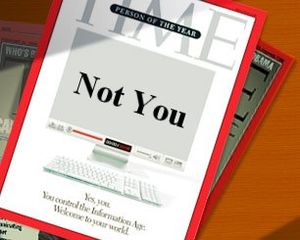 It is unlikely you will ever be Time Magazine's person of the year.

The "Great Man" theory of history is usually attributed to the Scottish philosopher Thomas Carlyle, who wrote that "the history of the world is but the biography of great men." He believed that it is the few, the powerful and the famous who shape our collective destiny as a species. And you are definitely not one of them.

Normally the editors of Time Magazine select the Person of the Year in the positive sense. However, the overwhelming mediocrity of your life was simply too remarkable to stifle. Your lack of accomplishment, shabby looks, disastrous financial situation, and stagnant love life are more shockingly bad than any good done by an individual this year.

To be sure, there are individuals we could blame for the many painful and disturbing things that happened in 2006. The conflict in Iraq only got bloodier and more entrenched. A vicious skirmish erupted between Israel and Lebanon. A war dragged on in Sudan. A tin-pot dictator in North Korea got the Bomb, and the President of Iran wants to go nuclear too. Meanwhile nobody fixed global warming, and Sony didn't make enough PlayStation 3s. But what you did was much worse, and we are pretty sure that you are responsible for some of this stuff, too.

You were part of the grass roots of Web 2.0. Nobody reads your blog, your YouTube videos are self important and inane, and your podcast is being used at Guantanamo Bay to torture illegal combatants. Even more outrageous, you consider your edits of Wikipedia to be insightful and nuanced, but they are truly the worst tripe on that whole site (and that is saying a lot).

We've read that pedantic twelve pages you keep telling yourself are the beginnings of the greatest American novel since Moby Dick. They suck! And we hope you don't think anyone is going to be impressed by those canned love sonnets you scrawl out. Also, trust us, that screen-play you have rolling around in your head will end up in the Hollywood's dustbin if it ever gets written.

The bottom line is that this is a shot across your bow. You need to shape up or ship out. Honestly, shave, do some laundry, get a gym membership, mow your lawn, stop eating so much trans-fat, and for goodness' sake, please stop picking at that scab. It's pathetic.

Featured Article  (read another featured article)
Featured version: 20 December 2006
This article has been featured on the front page. — You can nominate your favourite articles at Uncyclopedia:VFH.

This article was mentioned in the Chicago Sun-Times, further diminishing what little credibility the media had left.