WICHITA, Kansas -- In 1973 Wendy Harris was recruited by Superfriends at the age of 15. Specifically by Batman, as she was the niece of Detective Harris, the man who had been Batman’s mentor when he was but a Bat Boy. She was fired two years later and replaced with an Exorian Wonder Twin named Jayna (aka Jan), in a response to a lawsuit filed by the Galactic Equal Opportunity Commission when it was noticed that no non-Earth beings were in the Superfriends. (Superman was regarded as the owner of record of the Justice League, but the employees – who he obviously didn’t need the help of – were all of Earth) One possible exception of Wonder Dog was brought up, as he could communicate at Scooby level understanding, but this was rejected, as in spite of it being impressive that a dog could talk, he was still an Earth dog.

The termination was not easily taken. Wendy Harris argued that she had actually passed a rigorous test to get into the Justice League, while Jan had failed that test. Jan on the other hand, claimed that the test was Terra-centric, and culturally biased against Exorians.

The case wound up in Federal Court, where Justice Sotomayor ruled that it was the right of the Superfriends to come up with a test that would be fairer to all species. The new test was devised, one in which 75% of your grade depended upon turning into a seagull and carrying water in a bucket with a space monkey perched on your back. Jan passed this with flying colors…Wendy did not. (It had already been known that neither Marvin White or Wonder Twin Zan were expected to take the test. Both had only been sex-worker contractors for servicing Batman when Robin was tired.)

A crushed Wendy thus departed the Justice League, not even getting the paid schooling that Marvin got at Ivy College in Gotham. But Batman always took care of those who took care of him, related Wendy in her new tell all book, "SuperPain".

Now 51, and now Mrs. Harris-Vulcan, she looks back on her 15 minutes of fame with nostalgia but still much regret. “I have seen over the years the introduction of some alleged ‘Wendy’, so as to try and assure everyone that I’m okay. Truth is, they used me and dumped me, and it had nothing to do with Exorian-American rights, it had to do with sex.”

That’s right. The publication of Wendy Harris-Vulcan's book reveals for the first time the behind the scenes debauchery that was so routinely a part of the Justice League. “I’m tired of hearing that I lost my job because I had no super powers – what a joke! What the hell super power did Batman have other then the ability to leap on Robin in a single bound? And what power did Robin have other than a near infinitely elastic rectum? And Aquaman? Please, don’t even get me started on that Chicken of the Sea.”

Wendy has pointed out that even Wonder Woman had no real superpowers, just gadgets like bracelets, an invisible plane and a lasso. “That invisible plane should have told everyone something about the sex fixation these ‘superfriends’ had. What kind of exhibitionist wears a swimsuit while flying in an invisible plane for every kid and dad in America to look up and see?” 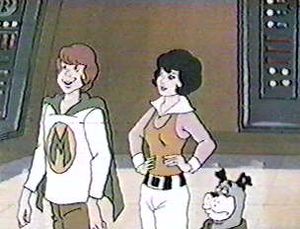 As the book reveals, Wendy’s subsequent disappearance after the highly publicized Exorian case was due to another suit brought against the Justice League, of an entirely different nature. “My Uncle Harris sued Batman, and the Justice League, for child endangerment and sexual harassment. He was able to show several occasions where I was allowed to come along on battles with galactically fearsome monsters, and put in harms way quite a lot. It was also proved that the purpose of them dressing me the same each week was to show off my then developing figure. This was also why they kept asking me to ‘pose pretty’, with my hands on my waist, or one hand on my waist. I was just a kid…I didn’t know why they wanted that done, but hey, when Superman asks, you trust him…*sobs*…you know?”

At that Wendy broke into tears, showing that the ordeal she’s lived with for decades is still fresh with her. “I got a nice settlement, my Uncle saw to that, but Batman would never talk to me again. None of the Superfriends did. Even Marvin stopped calling me, and that hurt, as I’d always saved him every week. I also hadn’t named him in the suit, though Lex Luthor provided me with a picture that he’d got from his hidden cameras that showed proof that Marvin had patted my ass. But was Marvin grateful? No, he knew which side of the bread his scholarship was buttered on. Bruce Wayne’s side. Some philanthropist – more like a philanderer.”

While she signed a non-disclosure agreement when she received her 3.7 million dollar settlement, she feels safe in speaking now. “After all, the modern day superfriends who have the names of those I knew are all from alternate Earths, now. These Johnny come latelies are nothing like the ones I lived and worked with.”

Wendy related, “I liked some of them. Apache Chief, Samurai, El Dorado and Black Vulcan. I felt bad for them, as they were discriminated against too, being assigned names that described their ethnicities in glaringly stereotypical terms, instead of being named after their super powers or skills, the way the white super friends were. And none of them hit on me or made crude sexual comments.”

When asked to elaborate, she said, “I’ll give you just one example. I’m cleaning the TroubAlert screen, and notice that Aquaman is staring intensely at my…well…well, my crotch. I asked him what he was doing, and he grinned and said he was trying to communicate with the tuna he smelled down there.” I didn’t fully understand what he meant, but I ran off…I was so embarrassed. Years later, I was angry. By what right? Shouldn’t he have been saving a drunken boater from an angry octopus? Instead, he’s trying to flirt with a girl not even old enough to drive!” 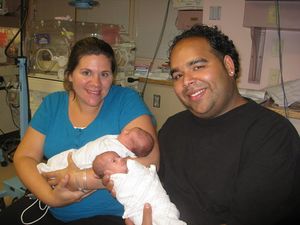 Wendy, Black Vulcan and their twins, long retired from crimefighting, 1992

But what did she do after the multimillion dollar settlement? “I did something that surprised everyone, especially as this was still back in the seventies. Remember Black Vulcan? I hit it off with him, as he knew what discrimination felt like, and we got married. I’ve been a housewife and loving it ever since, though I still helped him solve some crimes now and then. But all that crimefighting is over now.”

Indeed it is, as having three kids made Black Vulcan feel uneasy about going out to battle villains from the Legion of Doom each day. When interviewed, he said, “It seemed pointless to risk myself to vanquish bad guys that Superman could well handle without my help. And there was a growing distance between me and the others, anyway, for supporting Wendy in her suit. And hell, I was a ‘token’, like those dipshit Exorian Wonder Twins, no one wanted me there, and I had always known it. But my Wendy gave me the courage to realize that you don’t have to be a Superfriend to be a Super Hero!”

He quit with no notice and got a job as an assembly line worker at Delco Batteries, where he charges each battery with a single touch. He takes a modest wage, and he’s asked that the savings the plant realizes in their electric bill be donated to the Grey Avengers, an association of retired super heroes that maintain a nursing facility for the care of elderly super heroes. “My Black Vulcan taught me how to forgive”, said Wendy placing a hand on his arm. “I am glad he supports that group, not all super heroes are bad people, and even the ones I knew mostly tried doing good.”

And with that, Black Vulcan said, “Great Lightening! Look at the time! Interview’s over!” and swooped up a giggling Wendy to take her upstairs.