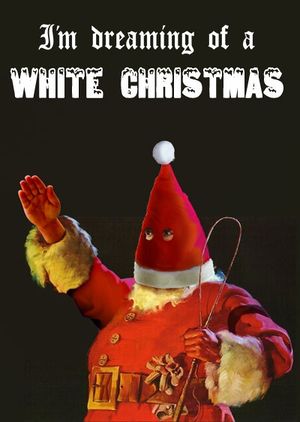 South Pole, Antarctica - A successor to Santa Claus has been chosen. Santa's German-American cousin, Klanta Klaus has been chosen to take over Santa's duties effective immediately. Santa was killed over North Korea early Christmas morning by a surface to air missile. Klanta bears a strong resemblance to his cousin but has a more sinister look. Klanta sat down early today with UnNews reporters from his work shop at the South Pole and explained some of the differences between himself and his more liberal late cousin.

"First of all, I want to let you know that there is going to be some changes now that I am Santa Claus. While my more liberal cousin gave gifts to anyone who was Christian and even those who weren't, I will only be delivering presents to white kids who are not Jewish." Klaus told UnNews. Asked why he chose to set up shop at the South Pole rather than the North, Klanta responded "Due to all these brown people using more fossil fuels, the earth is warming and the north pole is melting. They should have just let the white man have all the technology and luxuries. These gooks, chinks, and towel-heads should realize that the developed world is for the master race only". Klaus responded that the South Pole will one day be much greater than the North, "The South will rise again". Some of Santa's elves have already left the North Pole for the long trek to the South to join Klanta Klaus. Klanta is only accepting applications for Caucasian elves of the Christian faith and has turned away over half the elves that have shown up on his doorstep. Many of Santa's elves refuse to work with Klaus because of his beliefs and Mrs. Claus is apparently outraged at the choice of Klanta as her late husband's successor.

Despite the controversy surrounding Klaus's new position as the latest Santa Claus, he has already acquired a third of Santa's elves, a new sleigh, and has even assembled a new team of flying reindeer. The nine reindeer are led by Adolf the white hood reindeer who guides Klanta's sleigh, which is adorned with swastikas, across the White World. The Liberal Media has joined Mrs. Claus and some of the remaining elves calling for Klanta's immediate resignation. Klanta issues a public statement from his workshop stating that "I have no plans on stepping down and I hope that my reign is even longer than that of my late cousin. I can't believe how misguided people are today, they still want me to deliver presents to these chinks and gooks and these were the bastards that killed my cousin. Santa was a good man but his mistake was in loving everyone rather than just his own race. That is what led to his downfall.". Klanta assured all the good little white boys and girls that he would have enough resources to make Kristmas a reality for all the Aryan children. "Because I only have to deliver to the white kids, 30% of Santa's elves are more than enough to meet my demands. I don't have any room for diversity in my workshop".

Outraged parents of mixed and other race children are petitioning President Barack Obama, himself a half-breed, to do something about Klanta Klaus. An unnamed angry black woman from Detroit told UnNews that "President Obama needs to do something. He needs to take that cracker out. How the hell are my kids supposed to have Christmas now with that honky driving the sleigh. He should take that motherfucka out and replace him with a black Santa". Obama responded personally to the woman stating that he would like to do that but is simply legally unable to. He did inform her that he is strongly considering hiring a black Santa though. "The constitution protects Klanta's 1st amendment right to free speech. As long as he isn't inciting violence, Klanta has the right to say whatever he wants and deliver presents to whomever he likes". UnNews informed Obama that since Klanta isn't in the United States, the 1st amendment shouldn't apply. Obama responded that the laws and constitution of the United States encompass the entire planet.

"Like it or not, it appears that Klanta is the new fucknut of the ages. is now the new Santa Claus" he said. However, Obama is considering appointing Kimbo Slice as a black Santa Claus to deliver presents to the rest of the world. Upon hearing this, Klanta Klaus was outraged saying that Santa Claus is like the Highlander, "There can only be one". Mrs. Claus was reportedly thrilled by the potentional appointment of Kimbo as the new Santa Claus and invited him to join her at the North Pole. "I think I may have a case of jungle fever" Mrs. Claus said, "I think Kimbo is just the right man to help me out with that, they say that once you go black you never go back". It appears that Christmas may be split along partisan and geographical lines with a progressive, inclusive, liberal North Pole and a conservative, racist, South Pole. Whether both Santas can coexist on the same planet remains to be seen. Kimbo will be present at Santa's funeral on January 1st, Klanta has indicated he will not attend because he doesn't want to "associated with niggers and nigger-lovers".

This article features first-hand journalism by an UnNews correspondent.
Retrieved from "https://en.uncyclopedia.co/w/index.php?title=UnNews:Successor_to_Santa_Claus_chosen&oldid=5385112"
Categories: